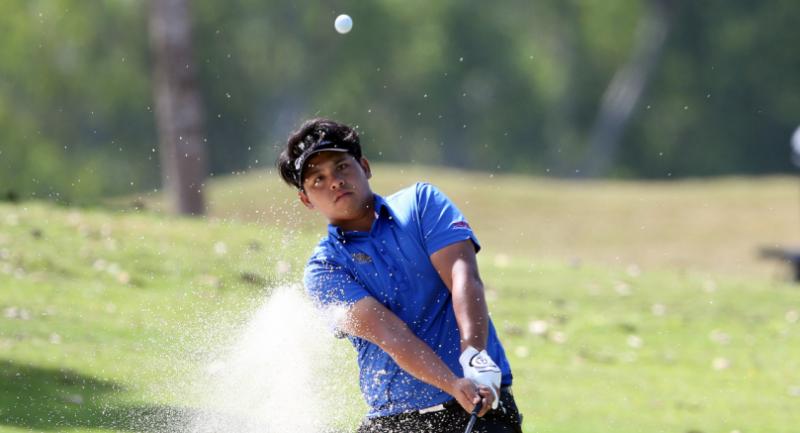 The Indonesian SEA Games men’s team gold medalist employed his long hitting and impressive putts to shoot six birdies, one eagle and a bogey for a total 14 under-par-199 and the first time lead as a pro.

“I was putting and driving very well today. I saved two long par putts by 20 feet on the eighth hole and  12 feet on the ninth. But the highlight was the 30 foot eagle putt on the sixth hole,” said the 22-year-old from Tak province who turned pro in January 2015.

“Although winds were not strong  but the pin positions were tough. That’s why it was tough for most of the players to shoot scores. But I putted very well which helped ,” said Chanachok who posted three top 10 finishes on a local tour this year.

The surprise third round leader has limited experience on the international event with an eighth finish on the ADT Thongchai Jaidee Foundation two weeks ago as his best result to date. He will have to bear with a load of pressure playing alongside Thongchai this morning.

“ My caddie and I will try to have fun together out there. I hope to finish within the top 3 so that I can secure a place in the second stage of the Asian Tour Q-School in January,” Chanachok said.

Last year’s runner up Thongchai had mixed day of one eagle, three birdies, two bogeys and a double bogey to settle with a 70 and a total 11 under-par 202. Like the third round leader, the world No 52 bemoaned about the pin positions.

“I think the pins were unfair such as on the first, fourth, fifth and 10 th. But the 11 th was the worst (where he drove the ball into the pond and ended up with a double bogey),” said the 47-year-old who must win this week to finish the year  inside the top 50 which will guarantee him all berths into the four Majors in 2016.

“I will try to shoot a lot of scores tomorrow and see how I finish in the end. However I have been playing all those Majors already. There are several good young players who can win also,” Thongchai said.

Chanthaburi-based Rattanon, who won the 2011 SEA Games gold in the individual and team events, will try to win his second ADT crown after his maiden at the Taifong Open in Taiwan last year.

“I have to control my game and try to putt better than today. I’m confident that if I can play my game I can win on Sunday.”

Kiradech Aphibarnrat, looking for his first title in 14 months, fired a 69 for a total 203, four shots back the lead.

“I just couldn’t make the putts this week. Four shots are possible to catch up with. But I cannot underestimate the young players out there. I have to do my best tomorrow.”

Midday leader Jaturon Duangphaichoom stumbled to a third round  81 and plummeted to tied 45th with a total  212.