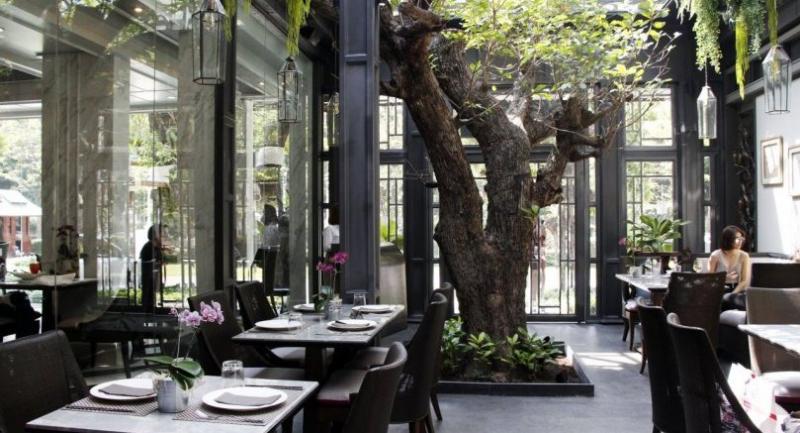 Nai Lert’s hotel might be gone, but the family legacy is alive and dining well

THE CLOSURE late last year of the Swissotel Nai Lert Park hasn’t slowed Naphaporn Bodiratnangkura down. The hotel’s former managing director, a third-generation member of the family that owned it, has plenty of new ventures to keep her busy.

Having renovated and reopened the family’s century-old teak house as the Nai Lert Park Heritage Home, Naphaporn has recently unveiled a restaurant called Lady L that’s dedicated to her late grandmother Thanpuying Lersakdi Sampatisiri, one of the old hotel’s founders. Situated in the same beautifully landscaped compound as the Heritage Home, the glass-enclosed restaurant can accommodate about 50 diners amid hanging plants and walls adorned with the embroidered pictures of birds and flowers that Thanpuying Lersakdi collected as a patron of Her Majesty the Queen’s Support Foundation.

“Thanpuying Lersakdi loved nature, so we tried to decorate with plants that reflect her life,” says executive coordinator Chakratorn Prasertying, who worked at the family hotel for more than 20 years.

“And she was a food connoisseur, preferring Western cuisine to Thai food, so we offer Western delicacies without fusion, including several of her favourites, like Beef Wellington and moules mariniere.”

More on the latter dish – black mussels in white wine sauce – in a moment, but first some family history. Thanpuying Lersakdi, his only daughter, inherited his business empire, and in 1976 also served as transport minister – the first woman in a Thai government cabinet.

The Heritage Home welcoming the public last year shares their stories in wonderful fashion, and then it’s off to Lady L, which is actually the second restaurant Naphaporn has established to honour family matriarchs since selling the hotel to Bangkok Dusit Medical Services.

Early last year she opened Ma Maison – it’s adjacent to Lady L – serving classical Thai dishes made from the recipes of her great-grandmother, Khunying Sinn. Ma Maison keeps alive the name of the French haute-cuisine restaurant that her grandfather, Binich Sampatisiri set up in the hotel in 1983.

“Several chefs from the hotel now work at Lady L, but the food here is more ‘home cooking’ in style than what you find in hotels,” says Chakratorn. So who is Cobb? The most popular story says Robert Howard Cobb, owner of Hollywood’s film-star-bedecked Brown Derby, contrived the salad one night after he hadn’t eaten all day. Bob Cobb (yes, that was his name) used every leftover in the kitchen, popped in some bacon and tossed the lot with French dressing. Thanpuying Lersakdi’s beloved Moules Mariniere (Bt780) deploy mussels from Ireland, smaller in size than the ones from New Zealand more familiar in Thailand – but then bigger isn’t necessarily better. The texture is firm and creamy, with nary a sand grain to be found. Chicken Pot Pie (Bt320) arrives with the top of the bowl wrapped in inviting puffy pastry. Underneath are savoury chicken, diced carrot and green peas in a creamy sauce.

The classic French seafood soup Bouillabaisse (Bt680) has a tomato base and swims with crab, mussel, sea bass, prawn, clam, squid and basil leaves. It’s served with a lovely baguette. The main courses include Slow-cooked Lamb Shank in red-wine sauce (Bt780) and the aforementioned Beef Wellington (Bt1,250), which is tenderloin steak also in red-wine sauce, wearing a cardigan of foie-gras pate and all of it huddled in a jacket of puff pastry. The desserts are outstanding, so don’t be a pig with the earlier courses.

The Lady L White Chocolate Fondant (Bt220) is a dark-chocolate purse filled with white-chocolate “lava”. Cream Caramel (Bt150) is an amazing marriage of soft custard and caramel topped with a brandy-soaked prune. A nice cooling beverage is the Velvet Canvas (Bt220), a smoothie of blueberry puree, banana, syrup, fresh cream and honey.