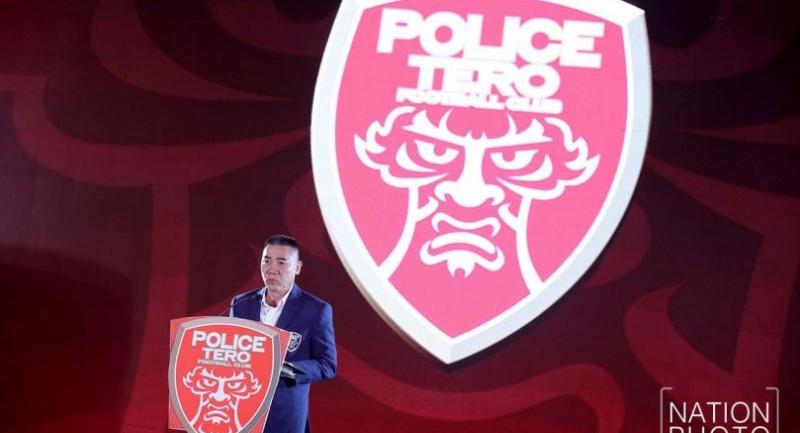 Former champions BEC Tero are confidently predicting a top-8 finish as they prepare for the new Thai League season with a new name, Police Tero, and a new logo.

The 2010-2011 winners, who were first called BEC Tero Sasana when they joined up with the Police Department last season as, are hoping for a improvement after finishing 13th in 2017.
“I guarantee that the team will be in the top 8 or I will take responsibility,” said Police chief Chakthip Chaijinda, the club chairman said on Tuesday.
“Over the past year, we have worked hard to improve our stadium, our youth academy and player transfers. And this year, we have successfully officially changed both our name and logo to Police Tero FC.”

Police Tero have also signed a new head coach, Englishman Scott Cooper, a former coach of SCG Muangthong, Buri Ram United and Ubon United.
“I have experience with top teams like Buriram and Muangthong and also with teams from the bottom, from T 3 to T 1,” Cooper said. “So my experience means I understand the level at the top but never underestimate players from the bottom and young players can always rise the challenges. I don’t overlook anything.
“I expect us to become competitive, home and away in every second of every game. I’m looking forward to building the club to be at the top again.”
Police Tero’s season-opener is away to PT Prachuab at Sam Ao Stadium on February 11. The newly-signed Aung Thu, the No 1 striker in Myanmar, and France’s Michael N’dri, the club’s top scorer last season, will again feature.
Meanwhile, Chakthip said the Police Department was still actively investigating match-fixing in Thailand and he guaranteed cheating in Thai football would be eradicated.