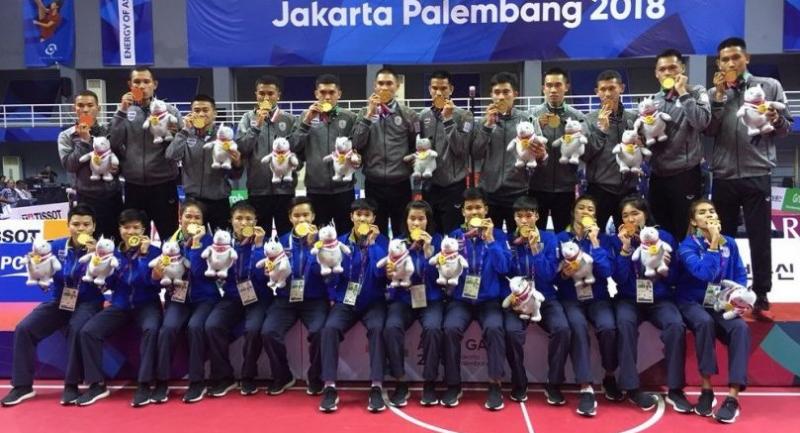 The Kingdom was rewarded with two golds it fully expected – in sepak takraw -– as well as one it didn’t, in paragliding.
The men’s team regu outperformed long-time rivals Malaysia 2-0 to claim their sixth straight gold medal
The A team routed out Malaysia A 21-15 21-15 before the B team, spearheaded by long-time national player Pornchai Kaokaew, survived a gritty first set by Malaysia B to win 21-19 21-13.
The men’s sepak takraw regu team event has been dominated by Thailand ever since the quadrennial competition was held in Bangkok 20 years ago.
“I have to give credit to the players after they started the tournament with several aspects to adjust. But they kept improving, like going upstairs step by step,” said national head coach Kamon Tankimhong, who was especially effusive in his praise for the B Team.
‘’I told them if they didn’t have the guts to fight, there was no way they would win,” he added. “They proved in the final [that they did have guts] – they recovered quickly from going behind to get back into the game and win.”

The 37-year-old Pornchai has won a record nine Asian Games sepak takraw gold medals, breaking the previous mark of seven golds by former teammate Suebsak Pansueb and Suriyan Pae-chan.
“I promised my kids that I would win a ninth Asian Games gold medal. Now I will try to win my tenth,” said the veteran player, who will have his chance in the team doubles.

Thailand’s pre-Games target was to claim a clean sweep of all four sepak takraw events they entered.
The other two are the men’s team doubles, which will be played later this week, and the women’s quadrant, which will be next week.
“This is a boost for the whole sepak takraw team,” said Kamon. “But we will never relax unless we will all four golds.”

The Royal Aeronautic Sports Association of Thailand president Group Captain Virayudh Tishyasarin said: “The result was what we expected. Our athletes were not nervous which is why they performed well. We wish to have more support on aeronautic sports from Thai fans.”

Despite just recovering from high fever two days ago, Naphasawan Yangpaiboon won the silver in women’s 25m pistol after she losing the third shoot-off in the final two against India’s Rahi Jeevan Sarnobat 2-4.

Winning Wednesday lifted Thailand into the top 10 on the medal table, from 11th to seventh.
Thailand now has four gold medals, including the triumph by the women’s taekwondo poomsae team on Sunday.
Thai sports officials went to Indonesia with a target of 17 golds.