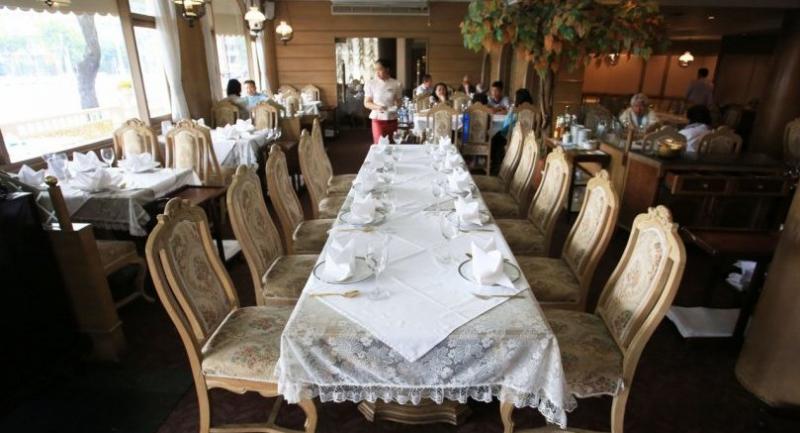 Menus with that Michelin factor

Thai restaurants make up the bulk of this year’s little red guide, which has expanded its entries to include Phuket and Phang Nga

IN A CITY known the world over for its incredible street food, it takes something very special to be awarded a Michelin star. However, Supinya “Jay Fai” Junsuta, 72, owner of streetside eatery Jay Fai has had no problems retaining hers for a second year and remains the only street venue in Bangkok to earn this internationally recognised rating.

The second edition of Michelin Guide Bangkok was launched on Wednesday and in addition to Jay Fai, the 12 other one-starred restaurants from last year have also retained their honours, namely Bo.lan, Chim by Siam Wisdom, Elements, Ginza Sushi Ichi, J’aime by Jean-Michel Lorain, L’Atelier de Joel Robuchon, Nahm, Paste, Saneh Jaan, Sra Bua by Kiin Kiin, Upstairs at Mikkeller and Savelberg.
Innovative European restaurant Suhring run by and named after twin chefs Mathias and Thomas earned an upgrade from one to two stars.

European restaurant Suhring run by twin chefs Mathias and Thomas earned an upgrade from one to two stars. (Nationphoto/Anand Chantarasoot)

No restaurant in Thailand has won the coveted three stars yet, though all three two-starred venues from the inaugural edition, namely progressive Indian eatery Gaggan, contemporary French restaurant Le Normandie and European delight Mezzaluna have retained their ratings.
“I lost 10 kilograms in the week after winning one star last year. I haven’t stopped since and people are still queuing up to try the dishes. I still cook with a charcoal brazier and am the only cook. About 80 per cent of the customers coming today are foreign,” says Jay Fai who also cooked for Prime Minister Gen Prayut Chan-o-cha and top tennis players Simona Halep and Jelena Osapenko.

Jay Fai, whose eatery is famous for omelette stuffed with a giant portion of crabmeat, retains one Michelin star and remains the only street venue in Bangkok to be recognised with such an award. (File Nationphoto: Chalinee Thirasupa)

Jay Fai inherited the business from her father, a stir-fried noodle chef – 40 years ago and quickly made her ordinary eatery extraordinary. Her famous omelettes with giant portions of crab vary in price from Bt800 to Bt2,000.
From 2pm to 1am every day except Sunday and Monday, diners still queue at her small shophouse with just seven tables in the Pratu Phee area, next to the Golden Mount despite being able now to book by phone and email.

“Though I have a variety of dishes on the menu, customers keep ordering the ones suggested in the Michelin Guide, namely crabmeat omelette and stir-fried crab curry,” says the sprightly septuagenarian who is also working with Thai Airways on designing inflight street food dishes for business and first class passengers.

The 60-year-old Thai restaurant Methavalai Sorndaeng next to the Democracy Monument on Rajadamnoen Avenue is among the 10 new restaurants to have been awarded one star.
Boasting a charming retro ambience with Victorian-style chairs and tables with white tablecloths and live ’80s Thai music, it’s long been popular among businessmen and politicians and counts among its customers former prime ministers Gen Prem Tinsulanonda, Anand Panyarachun and Chuan Leekpai.

“Our key is to deliver Thai dishes with refined flavours and cooked with local ingredients, spices and herbs. We make everything from scratch from the coconut cream to the curry pastes. We also stick to authentic recipes and will neither compromise the flavours to meet individual diners’ requests nor marry imported ingredients like salmon with Thai herbs and spices,” says Jirawut Sapkiree, the second-generation owner of Methavalai Sorndaeng.

The restaurant has 30 staff in the kitchen and can accommodate about 150 diners. There are more than 100 dishes on the menu and all-time favourites include green curry with fish ball, crispy rice noodles in sweet and sour sauce, and spicy lemongrass salad.
“Our location puts us at the heart of Thai politics. During the 14 October uprising in 1973, our restaurant housed a temporary Thai Red Cross centre and we delivered food until we ran out of ingredients. I hope we never see such politically tumultuous times again,” says Jirawut, who plans to renovate the restaurant next year and pass on management duties to his children.

The second edition of the little red guide has also expanded its reach to cover the best dining venues in the southern provinces of Phuket and Phang Nga as well as to Nonthaburi, Pathum Thani, Nakhon Pathom, Samut Sakhon and Samut Prakan in Greater Bangkok.
Pru restaurant in Phuket is the only restaurant in southern region to have been awarded one star. A little gem in Samut Sakhon with a homey ambience and family recipes, Ruean Panya also receives its first star as has Suan Thip in Nonthaburi that offers refined dishes inspired by royal recipes.

Located in the luxury Trisara resort, Pru restaurant is based on the farm-to-table concept and raises various local plants, herbs, organic vegetable, free-range chickens and ducks on its own 600-rai farm.
“My ultimate goal is to create a 100-per-cent locally sourced menu. To cook something great, you need great products from great farmers. Great farmers are from strong communities. So at Pru, we don’t want to be just a kitchen. We want to strengthen the local farmer community. This will yield better ingredients for better dishes,” says chef Jim Ophorst, a semi-finalist in S Pellegrino’s annual Young Chefs Award in 2016 and 2017.
Other one-starred Bangkok additions include contemporary Thai restaurants Le Du, R.Haan, Saawaan and Sorn and progressive cuisine eateries Gaa and Canvas.
Though no Thai restaurant has achieved a two-star rating, Gwendal Poullennec, international director of Michelin Guides, points out that more than half of the awards are going to Thai cuisine.
“We have also seen a trend in the degustation menu, whereby chefs design a complete experience for diners,” he adds.

One of those, celebrated chef Chumpol Jangprai of R.Haan – the name means food in Thai –offers a choice of three seasonal samrub (a set of shared dishes), each made up of 18 different items.
“We want people to sample a variety of dishes with different tastes made from carefully selected seasonal ingredients and enjoy a new dining experience. Pairing different items in one samrub is local wisdom. The different flavours don’t only complement each other, but also cater to family members of different ages,” he says.

His tom yum goong, for instance, has a theatrical presentation, coming in a glass siphon and prepared at the table. The herbs and coconut cream are placed in the top chamber then after vapour pressing, the intensely filtered soup drops back into the lower chamber. The aromatic soup is then poured over a bowl of river prawns and mushroom.
New restaurant Saawaan (heaven in Thai) run by two women – chef de cuisine Sujira Pongmorn and pastry chef Arisara Chongphanitkul – also reinterprets Thai comfort foods in innovative, multi-course offerings.

“I like Thai street food and it’s challenging to elevate them by giving a modern presentation while maintaining authentic flavours. I’m also interested in mixing and matching rare spices and herbs,” says Sujira.

The “Bib Gourmand” award, a rating that recognises restaurants offering exceptionally good food at moderate prices (within Bt1,000 in Thailand’s case), doubled in number this year from 35 to 72 venues.

GET YOUR COPY NOW
The bilingual edition of “Michelin Guide Bangkok, Phuket and Phang Nga 2019” in Thai and English is now available in a print version for Bt650 at leading bookstores and in digital version at www.Guide.Michelin.com.