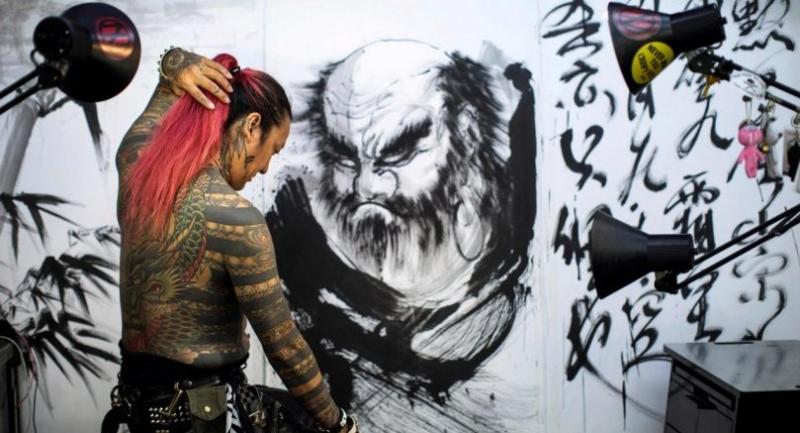 Art and the body beautiful

Tattoos still give Japan the needle as Olympics loom

WHEN MANA Izumi got her first tattoo at 18, she wasn’t trying to rebel or shatter any taboos – just copy Japanese pop diva Namie Amuro’s beach-bronze “surfer chick” look.
In Japan, where tattoos have for centuries been demonised for their association with criminals, former porn star Izumi turns heads with her copper tan, bleach-blonde bob, and an array of designs inked across half of her body.
“I wasn’t really an Amuro fan but I thought her tattoos were cute,” says the 29-year-old with a shrug.
“When my mum first saw my tattoo she burst into tears and I thought my dad was going to kill me.
“But I like being a bit different.”

Japanese tattoo artist Noriyuki Katsuta, a member of “Save Tattooing in Japan”, displays his tattoos as he poses for a photo at his studio in Tokyo. /AFP

Tattoos still provoke deep-rooted suspicion in Japan as the country prepares to host the 2020 Tokyo Olympics.
People with body ink are refused entry to public swimming pools, bathing spots, beaches and often gyms, while visible body art can be harmful to job prospects.
“It’s pathetic the way people discriminate against tattoos,” Izumi says while getting a $500 (Bt16,000) Aztec skull inked onto her leg.
“People might think I look a little scary,” she adds, taking a drag on her cigarette. “But I don’t regret getting inked.”
Japan has long had a prickly relationship with tattoos.

Japanese tattoo artist Horiyoshi III works on a design for his customer Kazuhide Okumura at his studio in Yokohama./AFP

In the 17th century criminals were branded as a form of punishment, while today Japan’s yakuza mobsters pledge their loyalty with traditional, full-body “irezumi” tattoos.
As Japan opened up to the outside world in the 1800s, tattoos were outlawed – along with snake-charming and public nudity -–because the Japanese feared outsiders would think they were “primitive,” according to Brian Ashcraft, author of “Japanese Tattoos: History, Culture, Design”.
At the same time, European royalty would come to Japan to secretly get inked, so coveted were the country’s tattoo artists.
The ban lasted until 1948 when the occupying American forces lifted it but the stigma remains in Japan.
“They look at tattoos and they think ‘yakuza’ – instead of admiring the beauty of the art form,” Ashcraft says.
“Until that changes, tattooing will continue to exist in a grey zone.”

Japanese model Yuki displays her tattoos as she poses for a photo at a park in Tokyo./AFP

Authorities turn a blind eye to the ban for the most part but a recent crackdown involving several police raids and fines has plunged Japan’s tattoo industry into confusion.
Meanwhile, a potentially game-changing legal battle recently ended after Osaka tattooist Taiki Masuda was arrested in 2015 for violating an obscure law that dates back almost 70 years.
The 30-year-old was fined 300,000 yen (Bt87,600) under the Medical Practitioners’ Act, which forbids anyone other than a doctor from performing medical procedures.
A 2001 Health, Labour and Welfare Ministry notice ruled that tattooing was medical work because it involves needles, technically criminalising Masuda’s job.
He decided to fight the law and last month, a court overturned his previous guilty verdict after a lengthy and controversial appeal process.
“There’s no legal framework regulating the tattoo industry in Japan,” Masuda says. “Livelihoods are at stake – that’s why I had to fight it, to hopefully help legalise tattooing.”
Masuda’s struggle polarised opinion among Japanese tattooists, estimated to number as many as 3,000.
Noriyuki Katsuta, a member of “Save Tattooing in Japan”, a non-profit co-founded by Masuda, called his arrest “a human rights violation”.
But many older artists are fiercely protective of tattooing’s underground roots and resist the idea that it should become a legitimate profession.
“Tattoos should have a dash of the outlaw about them,” insisted Horiyoshi III, who slammed Masuda’s actions as “provocative” and unhelpful.
“It’s like adding pepper to noodles – if you just ate pepper it would be too hot, but as a spice it adds flavour.”
Katsuta estimates between 500,000 and a million Japanese – or one in every 100 or 200 people – have tattoos.
Japan’s squeamishness about tattoos will be put to the test at the Tokyo Olympics, and before that at next year’s Rugby World Cup, both set to bring an influx of foreign visitors – including athletes with body art.
“I don’t know how much the Olympics is actually going to change opinions,” says author Ashcraft, noting that Japanese television still blurs out tattoos.
“When people look at foreigners with tattoos they kind of see that as foreign culture.”
At the root of much of the prejudice towards tattoos in Japan is the ancient Confucian idea that defacing the body inherited from one’s parents is disrespectful, according to Ashcraft.
“I don’t think people are actively thinking that it’s dirty anymore,” he adds. “But I do think that |collective consciousness still lingers.”
Izumi has little time for such outdated arguments.
“Among my mum’s generation, anyone tattooed-up like me was thought to be yakuza,” she shrugs.
“But when people preach about spoiling the body my parents gave me, it really makes me sick. I don’t feel I have to explain myself to anyone.”