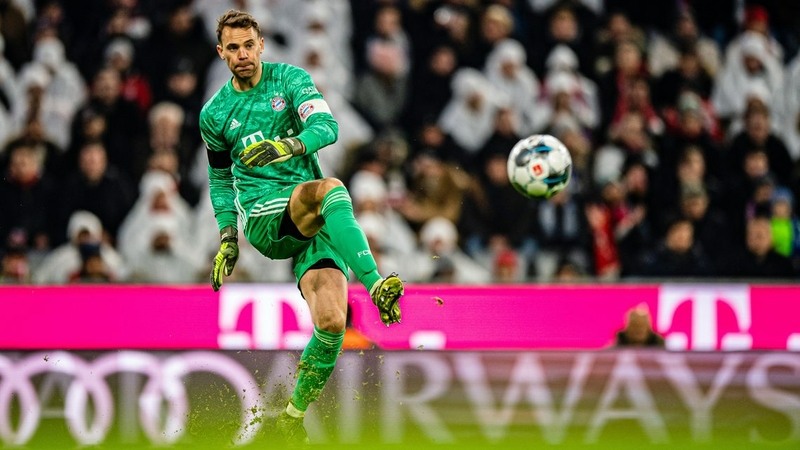 Manuel Neuer: still the best sweeper-keeper in the world

Manuel Neuer may turn 35 in a month but the Bayern Munich captain remains the best sweeper-keeper in the game - and that's not just when racing off his line to clear danger.

A world champion with seven Bundesliga titles and a Champions League to his name, Neuer has long been considered the game's best goalkeeper and is rightly credited with perfecting the 'sweeper-keeper' role - but less widely acknowledged is the Bayern Munich man's unparalleled ability on the ball in building attacks.

Puzzled? Don't be. The term 'sweeper-keeper' became a valid entry in the world football dictionary after the 2014 FIFA World Cup in Brazil, where Neuer earned praise for his convention-defying performances in charging out of his penalty area to clear opposition attacks.

Germany's last-16 victory over Algeria is the match most often highlighted to underline the point, the 6'4" giant having regularly saved Joachim Löw's side with his perfectly timed interceptions, 'sweeping' away the danger before it could develop further.

Neuer - here racing off his line to deny Islam Slimani - made the defensive side of sweeper-keeping famous in 2014. - Pool/Getty Images

Löw praised his No.1's "new way of interpreting how to be a goalkeeper", but for Schalke fans it was old news. And far from simply being a destructive presence in racing off his line, the Gelsenkirchen-born custodian would actively form part in his team's build-up play. So much so that in his 156 Bundesliga matches for the Royal Blues between 2006 and 2011, Neuer chipped in with four assists.

With such vision and accurate distribution available from the back, Schalke were no longer simply a team of 10 outfield players plus a goalkeeper, but a side with a full complement of 11 ball-players. It is a subtle but significant distinction. It is surely no coincidence that the last time Schalke won a major trophy, the 2011 DFB Cup, they did so with Neuer captaining them from the back.

The 34-year-old has honed his craft over the years. Whereas before he might dash off his line to merely clear a dangerous pass, now he readily controls the ball and often outfoxes oncoming attackers with eye-catching skills and feints before playing it to a teammate.

Watch: Neuer at the forefront of Germany's goalkeeping revolution

Neuer is so successful at this that his pass completion rate from open play stands at 86.3 per cent (from 772 attempted passes). Compare that with his contemporaries at the other clubs currently in the top five and, well, there really is no comparison: Yann Sommer (Borussia Mönchengladbach/79.8 per cent); Peter Gulacsi (RB Leipzig/77.3); Roman Bürki (Borussia Dortmund/74.4); and Lukas Hradecky (Bayer Leverkusen/71.9).

He makes this aspect of the game as much a part of his training routine as the other fundamental facets that make him such a phenomenal player. He is always involved when Bayern’s outfield players perform their rondos: one-touch drills with one or two players in the middle of a circle, trying to get the ball off the teammates surrounding them. And during goalkeeper-specific exercises, he crosses balls into the box for his fellow custodians to catch, doing so with unerring precision each time.

"I think he could easily play as an outfield player in the third division" said Germany goalkeeping coach Andreas Köpke. Bayern and Germany legend Miroslav Klose is equally convinced of his former teammate's ability on the ball: "I think he'd definitely get a few goals as a striker in Bundesliga 2."

Neuer (l.) is trusted to send in crosses in Bayern training such is his ability with the ball at his feet. - imago images / Passion2Press

Neuer himself takes a far more pragmatic view of his approach: "In modern football it's all about winning the ball back as early as you can and getting to the opposition's goal as quickly as possible. In order to do that as a goalkeeper, I obviously have to play a slightly more attacking style."

And he does so better than anyone else. According to Opta, in the current season Neuer has been involved in 49 passing sequences that have led to Bayern having a shot on goal - the highest tally of any goalkeeper in Europe’s top five leagues.

For context, Roma's Pau Lopez is next on the list with 41, ahead of Kepa Arrizabalaga (Chelsea, 40), Mat Ryan (Brighton & Hove Albion, 39) and Ederson (Manchester City, 37). Other ball-playing goalkeepers to have adopted Neuer's sweeper-keeper strategy, such as Marc-Andre ter Stegen and Alisson Becker, do not even make the top five.

And while imitation is said to be the highest form of flattery, it is not only what Neuer does but how he does it. Such is his sense of timing in coming off his line as last man that Neuer has never been sent off, all while transmitting an air of ease and composure to teammates and spectators alike. "On the sidelines you're calm and you don't get nervous because you always get the sense that he knows what he's doing," said Köpke.

It should come as no surprise, then, that even as he approaches his 35th birthday Neuer remains the undisputed first-choice for club and country. He has played in all 37 of Bayern's competitive games this season, kept a league-high 10 clean sheets, only conceded four goals in eight games in 2020 and is the only goalkeeper in Bundesliga history with over 100 top-flight appearances to concede less than a goal per game on average (0.78).

"Through my attacking positional play I want to help the team whenever I can," Neuer said. "As a goalkeeper you're often a lone wolf, but out on the pitch I guess I have sort of a helper's syndrome." Sweeper, playmaker, helper; whatever the right term may be, it continues to be incredibly effective for the best goalkeeper in the world.