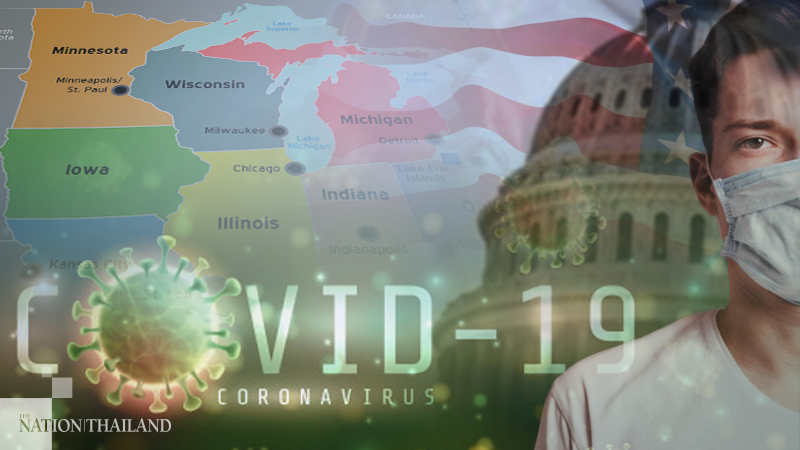 Coronavirus update: Infections are trending upward in the Midwest

Coronavirus infections are trending upward across the Midwest, raising concerns that those states are struggling to contain their outbreaks even as the nation's total daily caseload continues to decline.

Seven-day averages for new cases rose over the past week in the Dakotas, Illinois, Minnesota, Kansas and Iowa, according to tracking by The Washington Post. North and South Dakota experienced the biggest jumps, with average daily caseloads up 23 percent and 34 percent, respectively.

Other states reported progress against the virus, though it appeared to be marginal in some places. Daily case averages declined by about 6 percent over the previous week in Wisconsin and fell by 10 to 20 percent in several other Midwestern states, according to The Post's tracking.

Spikes in cases across the Midwest come as other regions of the country have reported gains against the virus after seeing infections surge over the summer. Nationwide, the seven-day average for new cases has steadily trended downward after peaking in late July.

Several cases in South Dakota have been linked to a motorcycle rally that drew hundreds of thousands of people to the city of Sturgis this month. Health officials there said Thursday that they were aware of fewer than 25 infections among attendees, but acknowledged that they could not identify every case that exists because of the event.

Three neighboring states have also announced infections among rally attendees, according to local news outlets: seven cases in Nebraska, 15 in Minnesota and "a few" in Wyoming.

CDC Director Robert Redfield warned of a "third wave in the heartland" if Midwestern states don't follow guidance from health officials to slow the virus spread.

"Middle America right now is getting stuck," he said in an interview this week with the Journal of the American Medical Association. "That is why it's so important for Middle America to recognize the mitigation that we talked about."

As cases have surged, President Donald Trump has taken aim at the pandemic response within his own administration.

On Saturday, he escalated his attacks on the Food and Drug Administration, tweeting a conspiracy theory about coronavirus treatments and stoking doubts about the agency's decision to pull its emergency approval of the drug hydroxychloroquine.

In an early morning tweet, Trump made the baseless claim that "the deep state, or whoever" in the FDA was "making it very difficult for drug companies to get people in order to test vaccines and therapeutics." He tagged FDA Commissioner Stephen Hahn, who was appointed by Trump last year, saying "they are hoping to delay the answer" until after the November election.

Trump also misleadingly claimed that "many doctors and studies disagree" with the FDA's decision to revoke an emergency use authorization for hydroxychloroquine for treating covid-19, the disease caused by the coronavirus. The FDA said in June that the drug was ineffective and that potential benefits were outweighed by safety risks. Other research by the federal government and private institutions has found that hydroxychloroquine performs no better than a placebo in virus patients.

The president's criticisms reflect a deepening politicization of federal health agencies and public health science as the virus rages around the country and the administration faces pressure to boost testing and develop a vaccine.

"This is really taking it to an unprecedented level," Eric Topol, a cardiologist and director of the Scripps Research Translational Institute, said of Trump's statements Saturday. "Every aspect of covid-19 - whether it's diagnostic, therapeutic - every single aspect, through and through, is being overtaken by Trump.

"The whole idea is to promote human health and safety," Topol added, "and this is all steps to compromise that."

House Speaker Nancy Pelosi, D-Calif., also pushed back on Trump's allegations, saying the FDA must ignore his political pressure and approve only treatments or vaccines that are safe and effective.

"The President's dangerous attempt to inject himself into the scientific decisions of @US_FDA jeopardizes the health & well-being of all Americans," she wrote on Twitter.

Trump's remarks came just days after the administration barred the FDA from regulating a range of laboratory tests, including tests for the coronavirus. The move stunned public health experts, who warned that the shift could result in unreliable coronavirus tests coming to market and worsening the crisis if people get erroneous results.

The president also recently blamed the FDA for not yet authorizing the emergency use of convalescent plasma, a promising but unproven treatment. "You have lot of people over there that don't want to rush things. They want to do it after November 3," he said in a White House news briefing this week.

The decision to block the FDA from overseeing lab-developed tests drew a rare public rebuke from former FDA commissioner Scott Gottlieb, who suggested that the move could open the door for substandard tests.

Gottlieb, who served in the Trump administration from 2017 to 2019, noted in a widely circulated Twitter thread Saturday that the FDA had spent the past six months working with labs to develop hundreds of coronavirus tests. The new policy from the Department of Health and Human Services "could put this work at risk," he said.

"Now, FDA's ability to protect public health could be challenged. FDA might not be able to provide critical advice to test developers or take needed enforcement actions against bad tests," Gottlieb wrote. "After all, how can FDA take action over something HHS says it doesn't regulate?"

Gottlieb said a "plethora" of tests could enter the market and go directly to consumers without being vetted by the FDA for clinical accuracy first.

"Policies issued in the middle of this pandemic should be carefully considered for their impact on the crisis," he said. "First do no harm."

Administration officials told The Post this week that the policy, announced Wednesday on the HHS website, was made for legal reasons and that the FDA lacks the authority to regulate lab-developed tests.

The Trump administration has also sought to diminish the role of the Centers for Disease Control and Prevention in responding to the pandemic. Last month, the administration ordered hospitals to bypass the CDC in reporting data on covid-19 patients, causing the information to briefly disappear from the agency's website. Officials reversed the decision after outcry from state governors and health experts who said they worried that the administration was manipulating the data for political purposes.