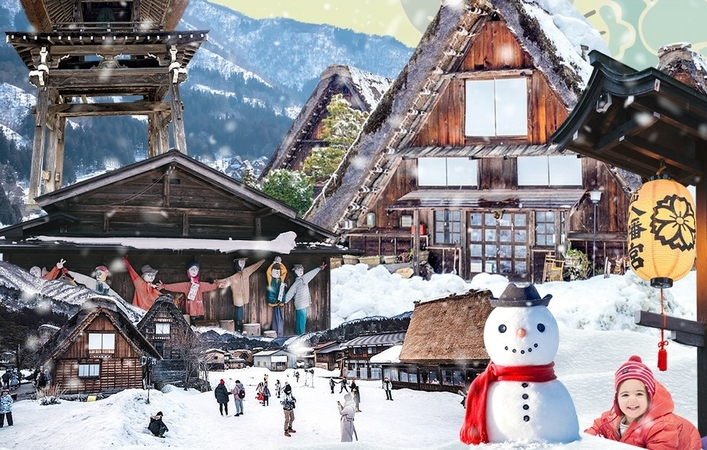 The village is a Unesco World Heritage Site, along with Takayama's old town, which is known as the "land in the embrace of mountains".
"Shirakawako" will be held at Seacon Square from November 20-29, at the Fountain Activity Zone furst floor, Seacon Square, Srinakarin, and from December 11-20 at the main atrium zone, first floor, Seacon Bangkae, Phetkasem Road.
The event is organised in collaboration with the Embassy of Japan in Thailand to give visitors and the public an experience of winter through the simulation of winter atmosphere and the snow in Shirakawago Village. The village has an architectural style known as Gassho Tsukuri, a traditional Japanese style with palm trees. The roof slopes at an angle of 60 degrees, which looks like two hands paying obeisance. In addition, the event has replicated many interesting places to see, such as Takayama Old Town, known as the land in the embrace of mountains where the water pipes are so clean that koi fish live.
Visitors can also experience artificial snow in the middle of a shopping centre. In the open there is a special zone for playing with artificial snow to make a snowman every day, 45 minutes per round.
Plus there will be a mini-concert by Thai idol bands who will take turns for entertainment from Friday to Sunday, such as I-MI, SIXTER, Daisy Daisy, Aster, Wishdom and Shining Stars. A Sarubobo doll workshop will be held on Saturday and Sunday.
Seventy famous Japanese souvenirs will be on sale and food will be sold in the atmosphere of the famous Sanmachi Street shopping district, also known as Hida Takayama.