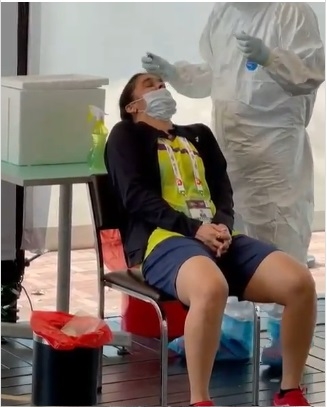 India's former world No 1 Saina Nehwal had to withdraw from the US$1-million Thailand Open after she tested positive for Covid-19.

The 2012 Thailand Open champion and another Indian player, HS Prannoy, were confirmed to be infected.

The result of Nehwal's third test on Monday was positive and was revealed just hours before her first-round match against Kisona Selvaduray of Malaysia. The latter gets a walkover into the next round.

The tournament is the first of a three-tournament Asian leg in Thailand including the BWF World Tour finals, all being held at Impact Arena Muang Thong Thani in Nonthaburi province on the outskirts of Bangkok.

The 30-year-old Nehwal, currently world No. 20, and Prannnoy have to leave the tournament to be hospitalised.

The BWF also confirmed that four players -- two Indians, a German and an Egyptian had tested positive.

Nehwal, who won the 2012 Olympic bronze medal in London, became the latest high-profile player to withdraw from the event.

Earlier world No 1 Kento Momota of Japan and the No 1 men’s doubles pair of Marcus Fernaldi Gideon and Kevin Sanjaya Sukamuljo cancelled their trip to Thailand due to the same reason.

Meanwhile in the first round actions, Thai No 2 Busanan Ongbamrungphan moved past Swiss Sabrina Jaquet 21-6 21-17 in the women’ singles while three-time world junior No 1 Kunlavut Vitidsarn rebounded from a second set loss to beat Luis Enrique Penalver of Spain 21-12 19-21 21-16.