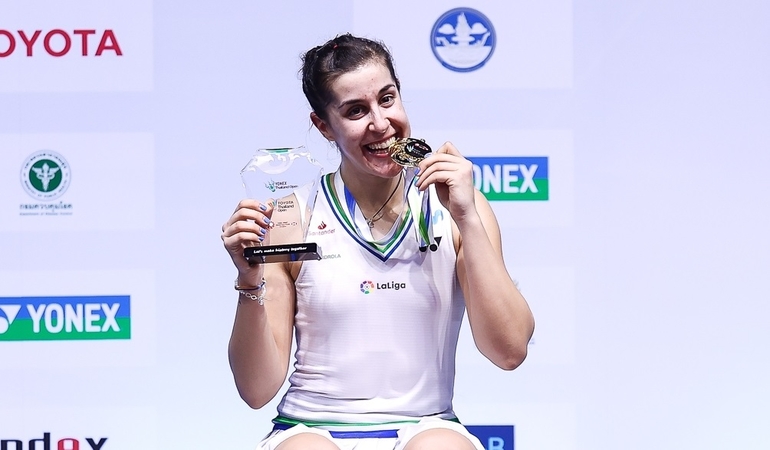 The world No. 6 did not drop a game during the whole week as she lifted her first crown since winning the Super 300 event in Lucknow, India in December 2019.

Throughout the 42-minute encounter, the three-time world champion never allowed Tai to get into any momentum, unleashing a series of aggressive and well-placed shots to beat the Taiwanese for the seventh time out of 16 meetings.

“Firstly, I wanted to enjoy every point, and I did, so I feel very happy. It was my determination; I want to keep going over the next weeks. I wanted to show her [Tai] from the beginning that I wanted to win,” said Marin, the only player to have won three world titles -- 2014, 2015 and 2018.

“I feel really happy that I could change my mind from last year; I had a difficult year personally in 2020, but I recovered well and my mind should decide what I want for the future, whether it’s the Olympics or World Championships,” added the left-handed Marin, who has won three Super 1000 titles, including the 2018 and 2019 China Open.

In the men’s singles showdown, former world No 1 Viktor Axelsen of Denmark, despite having a cold, tamed Ng Ka Long Angus of Hong Kong 21-14, 21-14 for his second straight Super 1000 victory after winning the All England Open in March last year.

“I wasn’t feeling 100 per cent going into the final. But I’m happy that I managed to win the match,” said the world No. 4.

Thailand Open II will start next week, also under a closed-door policy at the Impact Arena in Nonthaburi province. Players are trying to book their place in the World Tour Finals, which will take place during the last week of January.