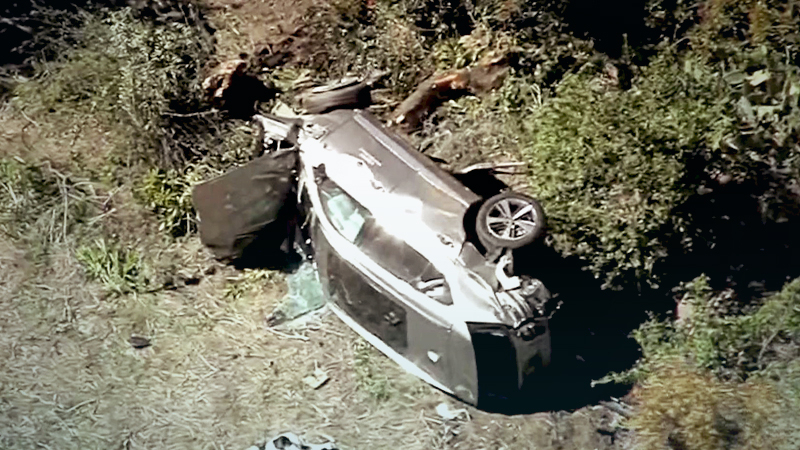 Casting a cloud of uncertainty on the next chapter of his storied career, golf legend Tiger Woods suffered leg injuries in a single-car crash Tuesday morning in a residential area south of Los Angeles, the Los Angeles County Sheriff's Department announced Tuesday afternoon.

Woods was extricated from his vehicle and was transferred to a hospital. Mark Steinberg, his longtime agent, said in a statement that Woods had undergone surgery, "and we thank you for your privacy and support." The extent of his injuries and any prognosis for recovery were not available Tuesday afternoon.

The crash is the latest turn for Woods, whose professional highs and personal lows have been broadcast the past quarter-century for the world to see, from the sight of him wearing his signature red shirt on the Sunday of a tournament to the viral clips of a 2017 arrest. The news especially rocked the golf world, the uncertainty fueling speculation about whether Woods, who has had injuries and ailments the past several years, would be able to mount another comeback and ever again hoist a trophy at a major championship.

According to the sheriff's department, Woods was alone in the car, traveling north on Hawthorne Boulevard at 7:12 a.m. local time when the vehicle flipped at Blackhorse Road, on the border separating Rancho Palos Verdes and Rolling Hills Estates in Los Angeles County.

The sheriff's department said Woods's vehicle suffered "major damage" in the crash, which is still under investigation, and television cameras broadcast images of the car turned on its side, front end destroyed and windows shattered.

With more than a dozen reporters converging on the crash scene and news helicopters circling overhead, investigators used caution tape to block off a curving stretch of Hawthorne Boulevard, a major, four-lane road through Rancho Palos Verdes. The hilly community about 30 miles southwest of downtown L.A. is known for its picturesque cliffs, golf courses and sweeping Pacific Ocean views.

Woods was taken to Harbor-UCLA Medical Center near Carson, Calif., a Level 1 trauma center located about nine miles northeast of the crash site, according to CNN. Citing privacy laws, a hospital spokesperson declined to comment or confirm that Woods had been admitted.

Woods hosted the most recent PGA Tour event, the Genesis Open at Riviera Country Club in Pacific Palisades, Calif. Although he did not play in the tournament because of recent back surgery, he was at the course with his fellow players, presenting the championship trophy Sunday to Max Homa.

"I'm sick to my stomach," an emotional Justin Thomas told reporters gathered Tuesday in Florida for this week's WGC-Workday Championship. "It hurts to see one of your . . . closest friends get in an accident. I just hope he's all right. Just worried for his kids. I'm sure they're struggling."

PGA Tour Commissioner Jay Monahan said the tour was aware of the crash and was "awaiting further information when he comes out of surgery."

Meanwhile, word spread quickly among players, many of whom had gathered in Florida for practice rounds ahead of this week's tournament. Golfer Justin Rose directed a tweet at Woods, saying: "We know how tough you are, we've seen it a hundred times. Hoping and praying you're ok my friend."

Woods has been a transcendent star whose life and career has been under a spotlight since he was first learning to swing a golf club. He rewrote record books, chased down the game's legends and became one of the world's most marketable celebrities, signing lucrative endorsement deals with companies with a host of Fortune 500 companies.

From 1997 until 2008, he was without peer on the course, winning 14 major championships, including four Masters tournaments, trailing only Jack Nicklaus' 18 majors in the history books. His fame often overshadowed the sport, and headlines and tabloids increasingly focused on his personal life. Woods admitted to extramarital affairs and announced a break from golf in December 2009.

In the ensuing years, Woods battled through injuries - particularly lingering back issues that derailed his game - broke with his longtime caddie and slid down the world rankings. He was arrested near his Florida home in May 2017 for driving under the influence of drugs or alcohol. He eventually took part in a DUI offender program and pleaded guilty to reckless driving. He told police at the time he was taking prescription painkillers and later issued a statement saying he'd experienced "an unexpected reaction to prescribed medications."

Five weeks later, Woods shared in a tweet that he'd undergone a "private intensive program" and will "continue to tackle" an issue that he did not specify.

That year had been especially difficult for Woods on the course; he pulled out of the Masters and cut his season short, opting for a fourth back surgery. When he returned the following season, he still showed flashes of a player still capable of brilliance on both tee box and green, finishing second at the 2018 PGA Championship and renewing speculation that he might still have a shot at Nicklaus' vaunted record.

After years of turbulence and speculation, in 2019, Woods won his fifth green jacket at the Masters, his first major since 2008. Unlike the young prodigy who overpowered courses and wowed spectators, Woods was a 43-year old champion, facing a ticking clock and a string of ailments. He had knee surgery in August 2019 and last December underwent a fifth back surgery.

It was his fourth microdiscectomy procedure, aimed at lessening nerve pain. Woods had the same procedure in 2014 and twice the following year. In April 2017, he had spinal fusion, returning to competition in less than a year.

On Sunday, Woods spoke with broadcaster Jim Nantz during the final round of the Genesis Invitational. Asked about playing in this year's Masters, Woods said, "I've got to get there first."