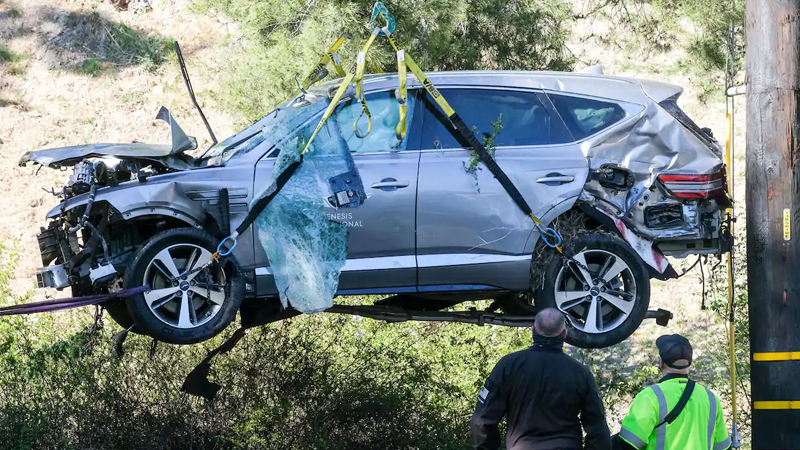 After surgery, medical experts predict a long and difficult recovery for Tiger Woods

The road to recovery for golf legend Tiger Woods, injured in a in a single-car accident Tuesday outside of Los Angeles, began with a lengthy surgery to repair major fractures to his right leg and ankle.

Long before focus can turn to whether he will play competitive golf again, he faces an immediate future full of more pressing matters, including a critical risk of infection, the likelihood of additional surgeries and weeks of recovery simply to be able to walk again.

Woods, 45, suffered "comminuted open fractures" - meaning multiple breaks in which part of the bone breaks through the skin - in both the upper and lower portions of his right tibia and fibula, which required doctors to insert a rod into the tibia, according to a statement Anish Mahajan, chief medical officer and CEO of Harbor-UCLA Medical Center, released early Wednesday through Woods's representatives.

"Additional injuries to the bones of the foot and ankle were stabilized with a combination of screws and pins," Mahajan's statement said. "Trauma to the muscle and soft-tissue of the leg required surgical release of the covering of the muscles to relieve pressure due to swelling."

Woods's team added that the golfer was "awake, responsive and recovering in his hospital room" after what it described as a "long" surgery.

Because of the "open" nature of Woods's fractures, sometimes also called compound fractures, the risk of infection is significant, and the likelihood of additional surgeries is high, according to experts in the field of orthopedic trauma surgery. The injury suffered by quarterback Alex Smith of the Washington Football Team is one well-known example.

"This is not a one-surgery [condition]. This is a multiple-surgery [condition]," said David L. Helfet, orthopedic trauma surgeon at Hospital for Special Surgery in Manhattan. With an open fracture, he said, protocols call for multiple debridements - the removal of dead, damaged or infected tissue.

In addition, Helfet said, Woods "may need soft-tissue procedures, maybe a skin graft. He may need multiple, additional procedures to stabilize the bone perfectly, to restore the length, alignment and rotation of the leg."

Insight into Woods's condition and prognosis by those outside his immediate medical team are naturally limited by a lack of detailed knowledge of the specifics of his case. Among the questions left unaddressed by the statement early Wednesday from Woods's team was whether there were additional injuries to his left leg, as initial reports suggested.

However, Helfet, a surgeon for 40 years, was cautious about Woods's prognosis.

"The risk of an injury like this is not necessarily lifesaving; it's limb-saving. And the sooner you get the patient into the into a trauma center, the better," he said. " . . . To get one of these injuries healed - the bone healed, the soft tissues recovered, [and] assuming there's no nerve and artery damage and the muscle is recoverable, you're talking about, until he can walk and put weight on his leg and actually have function, two to three months, at least.

"My suspicion is, and I'm dealing here with incomplete information, if he doesn't get an infection in his leg and he doesn't get arthritis in his ankle, I think he will definitely play golf again," said Mallon, who played on the tour from 1975-79 and was later a surgeon at Emerge Ortho and a clinical professor at Duke University School of Medicine. Mallon said arthritis is a concern any time a fracture affects a joint, such as the ankle.

Mallon said Woods was fortunate that the injured leg was his right, since it is the left leg that absorbs most of the force in a golfer's downswing during the transfer of weight.

Mallon, while citing his lack of specific knowledge of Woods's condition, guessed Woods would be under non-weight-bearing orders in the immediate future - perhaps with a "knee scooter" to get around while keeping his right leg off the ground - then graduate to partial-weight-bearing protection.

"With fractures of this sort in the lower extremities, it takes about three months to heal enough to fully bear weight," he said.

At Harbor-UCLA, Woods's initial surgical team likely included a general-surgery trauma specialist, as well as vascular, orthopedic and plastic surgeons, according to experts. He was almost certainly placed on a strong antibiotic to reduce the immediate risk of infection. Still, it is a risk that will remain for the duration of his recovery, according to Helfet.

"The danger of infection is there until he is fully healed," he said. "Obviously, it's more likely to occur sooner rather than later. But bugs have a way of hiding . . . They can hide for a long time and only appear later."

According to Andrew Pollak, chair of the department of orthopaedics at the University of Maryland School of Medicine and chief of orthopaedics at the University of Maryland Medical System, the main concerns for Woods in the coming days will be the risk of infection; the potential development of compartment syndrome, in which swelling inside the leg constricts blood flow, often leading to amputation; and the possibility of "nonunion," in which the bones fail to heal properly.

"The real challenge he'll have in the coming weeks," Pollak said, "is whether he'll get primary healing of his wounds."

Pollak said UM's trauma hospital sees injuries such as Woods's several times a week, and that 50% of those are unable to return to work within two to seven years of the injury.

"However, high-performance athletes in our experience generally do better," Pollak added. "What I would say about Tiger is he's already recovered from five spinal surgeries and come back from them. So I wouldn't put anything past him."