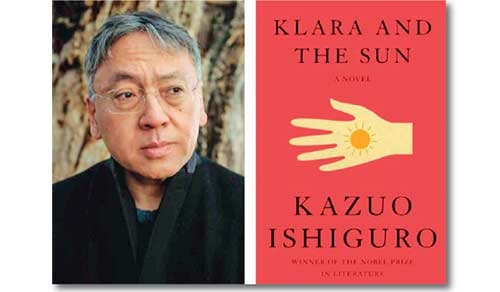 Kazuo Ishiguro’s 2021 novel is about a domestic aide robot

We are hearing and seeing more about robots in the house helping with chores. And really it frightens me. I am glad Sri Lanka is backward in harnessing Artificial Intelligence to have robotic domestic aides.

Kazuo Ishiguro’s new book, Klara and the Sun’ his first since the Nobel Prize in Literature awarded him in 2017 “for works that uncovered the abyss beneath our illusory sense of connection in the world”, is set in a near-future America, “where the social divisions of the present have only widened and liberal-humanist values appear to be in terminal retreat,” with the robot Klara- Artificial Friend – giving his/her opinions. “The book addresses itself to an urgent but neglected set of questions arising from a paradigm shift in human self-conception. If it one day becomes possible to replicate consciousness in a machine, will it still make sense to speak of an irreducible self, or will our ideas about our own exceptionalism go the way of the transistor radio?” Artificial Friend Klara is a sort of mechanical governess bought by a young teenager Josie, suffering from an obscure illness “At first, Josie’s family is unsure how to relate to Klara: She seems to them something in between an au pair and a household appliance. Ishiguro wrings plenty of pathos from these conflicting attitudes.”

Another facet of the story, as Ishiguro sees it, is the rise of ever more sophisticated technology and the widespread adoption of artificial intelligence creating a permanently jobless class, which in turn has led to mass unrest and top-down repression.

I read and quote from a very long critique titled Kazuo Ishiguro Sees What the Future Is Doing to Us by Giles Harvey writing in the New York Review of Books. He sums up his assessment of Ishiguro thus: “With his new novel, the Nobel Prize-winner reaffirms himself as our most profound observer of human fragility in the technological era.”

I was delighted with the article as I had read ‘The Remains of the Day’ (1989), saw the film, and later read ‘Never Let Me Go’ (2005) and found him to be an excellent writer in English. As you know, ‘Remains….’ is the narration of his life story by a faithful English butler, and was awarded the 1989 Booker Prize. James Stevens, the stiff and starchy butler, devotedly serves his lord and master who is a Nazi sympathizer in between the two world wars. He serves without a thought for himself and not permitting the slightest desire to interfere with his daily routines though he is attracted by another of the ‘downstairs staff.’ He realizes his folly too late when he leaves service and drives to seek Miss Sally. She is married by then.

You would think that that sort of story would not make a viewer-drawing film, but it did in the hands of director James Ivory, producer Ismail Merchant, and screen writer Ruth Prawer Jhabwalla, the very successful trio. The film was nominated for eight Academy Awards in 1994, for Best Film, Best Actor (Anthony Hopkins), Best Actress (Emma Thompson), Best Screen Play, Best Director and Best Production, among others. The cast included Hugh Grant and Christopher Reeves.

My reaction to reading “Never Let Me Go’ was strange to say the least. At the start I thought I was reading an account of a school story which would develop to include love and other happenings. Just kept getting a cold feeling as I read about Kathy, her friend Ruth and the third of a triangle of sorts – Tommy, living normal lives in Hailsham, a progressive boarding school. Then came clammy fear when I realized they were cloned human beings – named ‘donors’ and worse, were to donate

their organs to real humans who would be saved but the clones would be ‘complete’ – die in their thirties. The process of donating starts after graduation. Kathy knows what’s coming, and yet she tells her story, and seems to accept her fate, without self-pity or alarm, as though state-sanctioned organ theft were just another one of life’s minor irritations. Ishiguro exposes the defects of our current liberal order, and the selective blindness of its beneficiaries. His comments are relevant to workers who give of their service and even life while the beneficiaries are rich, powerful and of course utterly inconsiderate and unfeeling. Here I thought of our women slaving in the Middle East while the politicos especially back home benefit from their earnings. During the Covid pandemic, these stranded workers were the last to be repatriated and at their cost, after many complaints by thinking members of the public.

“Love and friendship may not survive death, but they grow stronger and deeper right up until the end” This is the moral center of the novel.

The film directed by Mark Romanek in 2010 starred Carey Mulligan, Keira Knightly and Andrew Garfield. Frankly, I would not want to see it. Donors and transplants are all too common now, but this novel, termed a dystopian tragedy. would be hard for me to watch.

He is a British novelist, screenwriter and short story writer and is one of the most celebrated current ‘men of letters’. Born November 8, 1954 in Nagasaki, to a traditional three generational Japanese family, with Nagasaki developed but standing as a symbol of human destruction. To watch his favorite program, “The Lone Ranger,” Ishiguro had to go to his friend’s next door.

Ishiguro’s father, Shizuo, was an oceanographer whose work on storm surges caught the interest of the British government. In 1960, he moved his young family to Guildford to take up a short-term research job. Like Nagasaki, Guildford was a place of long-established custom. Everyone was white, and yet the new arrivals were warmly received. Ishiguro picked up the language quickly, and learned to turn his foreignness to his advantage, putting it about, for instance, that he was an expert in judo. He also started going to church, where he became the head choir boy. His family believed it was important to respect local ways, however odd they might appear. His father’s employment was extended. Growing up between two cultures, Ish, as everyone now called him, acclimatised himself effortlessly. His mother, Shizuko, schoolteacher, maintained close contact with family back home. To be Japanese was for the growing boy a private source of confidence, but he was firmly rooted in England. It was a relief, when, in the late 1960s, his parents decided to stay for good.

He was a good student and experimented in life. Before studying English and philosophy at the University of Kent, Ishiguro hitchhiked around America and held a series of jobs in England, including grouse beater for the Queen Mother at Balmoral Castle in Scotland. After graduating, he took a job in an organization in West London that helped homeless people find housing. While there, he met Lorna MacDougall, a social worker from Glasgow, whom he married in 1986. She is Ishiguro’s first and most important reader, and her comments can be unsparing. In 1979, he studied creative writing at the University of East Anglia.

In his late teens and early 20s, when he was trying to make it as a singer-songwriter, Ishiguro had shoulder-length hair and went around in torn jeans and colorful shirts. In late October 1983, young writer Ishiguro, who’d recently published his first novel, joined a quarter million people in central London to protest against thermonuclear weapons.

Ishiguro’s first novel – 1982 – when he was 27, ‘A Pale View of Hills,’ written while at the University of East Anglia, is largely set in a Japan of the mind, an imaginary counterfeit of the place and was acclaimed. The following spring, Granta magazine named him on its list of Best Young British Novelists along with Salman Rushdie, Martin Amis and Ian McEwan. He decided to quit his job and devote himself full time to writing. He named Charlotte Brontë as the novelist who influenced him most.

He is meticulous in his writing, spending years mulling over a story. Then he draws detailed blueprints for the entire novel, First, he writes very quickly without revisions. He drafts a chapter in longhand; reads it through, dividing the text into numbered sections. On a new sheet of paper he now produces a sort of map of what he has just written, summarizing in short bullet points each of the numbered sections from the draft. Working from this sheet, he then produces a flow chart, which in turn serves as the basis for a second, more painstaking and deliberate draft. When this is finished to his satisfaction he finally types it up. Then he moves on to the next chapter and the process starts again.

By his own admitting he is not obsessive about his writing. ‘Klara and the Sun’ is only his eighth novel. When he does want to, he is capable of going flat out. He produced a first draft of ‘The Remains of the Day’ in a four-week crash, writing from morning till night, stopping only for meals.

“He’s very at peace with himself,” Robert McCrum, a longtime friend and former editor, said. “There’s no darkness in him. Or if there is, I haven’t seen it.”

NOTE: a text formatting issue caused the omission of many words in one paragraph in Nan’s last week’s article; Nan apologizes to her readers for the garbled text.”