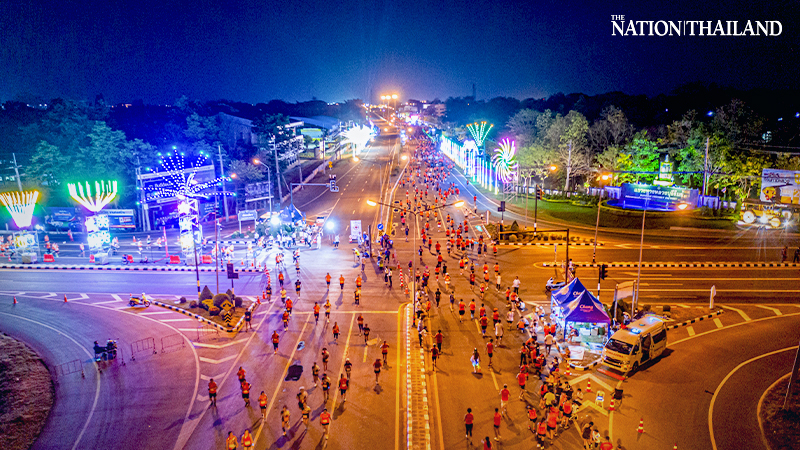 More than 21,000 runners participated in the Buri Ram Marathon 2021 organised by Chang on Saturday night.

The night marathon, with dazzling, colourful lights, started at the Chang International Circuit and ended at Chang Arena Stadium,

The marathon was divided into three men's and three women's categories.

Sergei Siriyanov from Russia won the 42.195-kilometre marathon for men in a time of 2 hours, 35 minutes, 01 second, while the winner in the women's category was Rabiang Rangpia in 3:14:57.

Thailand's Nattawut Innum won the men's half marathon, running the 21.2km race in 1:11:48, while the women's winner was Natthaya Thanaronnawat in 1:26:55.

Tourism and Sports Minister Pipat Ratchakitprakarn, who presided over the opening ceremony, said this was the first time that the Buri Ram Marathon was kicked off at night compared to the previous years when it was held in the morning.

He added that the marathon organisers had implemented measures to contain the spread of Covid-19.

"This marathon also helped stimulate the economy as the majority of runners took their families to travel in the province," he said.

He expected runners from foreign countries to participate in the country's marathon in the latter part of this year once runners in Thailand receive their Covid-19 jab.