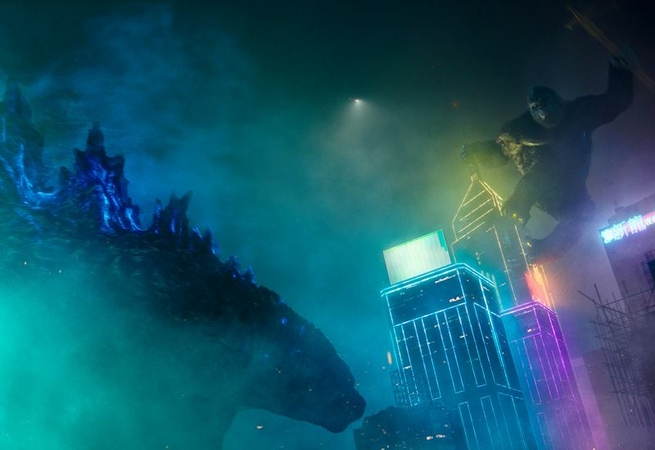 'Godzilla vs. Kong' is a clash of the titans - and mismatched storytelling styles

If "Godzilla vs. Kong" sounds like the billing in a prize fight, the movie - a creature-feature sequel to 2017's witty, stylish "Kong: Skull Island" and 2019's more flat-footed "Godzilla: King of the Monsters" - lives up to that rock-'em, sock-'em dynamic, in more ways than one. In a literal sense, it's a multi-round matchup between the reptilian behemoth, an atomic blast-breathing kaiju, and the big ape, who's looking a little worse for wear and gray in the muzzle as the film begins, several decades after the Vietnam War-era setting of "Skull Island." In a stylistic sense, it's also a battle between storytelling with an emotional connection and monster-moviemaking at its most reductive: loud, effects-laden stimulation for the retina, but not much brain or heart.

As Kong awakens from a peaceful night's sleep at the start of the film, he's almost cuddly, even when he uproots a massive tree with his bare hands, strips it of leaves and branches and hurls it skyward like a javelin. Jia (Kaylee Hottle), the little deaf girl who is watching him from nearby, unafraid, seems to sense this. The last surviving member of the indigenous tribe that once shared the island with Kong, Jia has a strange rapport with the beast - and vice versa. (It's more than a rapport, really, as we'll learn later in the film's most touching and provocative scene. But "Godzilla vs. Kong" doesn't seem to know how to take full advantage of Jia and Kong's surprising bond, which, while a significant plot point, is underutilized.)

It's always a bad idea to weigh a film against the one you wish you'd seen, and not simply by what you're given. With "Godzilla vs. Kong," we're given two antagonists, but only one of them - the titanic primate, a cousin of Man, however overgrown the big lug may be - is easy to love. The coldblooded Godzilla, despite efforts to find motivation for the mayhem he wreaks, will never be especially relatable.

But, oh, how the film does try.

As things get underway, two parallel plots start to fall into place: Godzilla, in his first attack in three years, emerges from the seas to wreak havoc in Florida. (His arrival, like an inanimate storm, is referred to as making "landfall." But hurricanes have more personality.) That story line involves a "Scooby-Doo"-esque investigation of Godzilla's motives - and, naturally, the discovery of a secret plot engineered by a shady corporation - uncovered by a trio of meddling, conspiracy-minded misfits (Millie Bobby Brown, Julian Dennison and Brian Tyree Henry). The human protagonists skew young here, which tells you something about the film's target demographic.

The other plot involves a team of commandos (Alexander Skarsgard; Rebecca Hall, who plays Jia's adoptive mother; and Eiza González). They have been tasked with recruiting Kong as an escort on a mission to the center of the Earth. There, in a deep cavity that is believed to be the ancestral home of all the monsters plaguing mankind - and there are a lot - is a power source that the film's villain (Demián Bichir) needs to combat Godzilla.

Kong, groggy from sedation and strapped to the deck of an aircraft carrier en route to the "Hollow Earth" access point in Antarctica, meets the lizard king in the middle of the Tasman Sea for Round 1. And so begins what might be called the Thrilla with Godzilla. It actually is pretty thrilling, as CGI pugilism goes. (So, for that matter, are some of the effects used to render the Hollow Earth, where gravity is said to be "inverted," whatever that means.)

Their epic faceoff will include other battles, in Hong Kong, and with additional adversaries. You might guess who - or, rather, what - one of them turns out to be, simply by looking up some of the best-loved Japanese movie monsters.

Is love too much to ask for? In one corner, we have Kong: a soulful-eyed galoot who, as has been true since the original film, is just looking for a little tenderness. In the other corner: Godzilla, a scaly, albeit misunderstood, misanthrope. One half of "Godzilla vs. Kong" wants to tell a human story. Believe it or not, it partly succeeds. The other half just wants to break stuff.