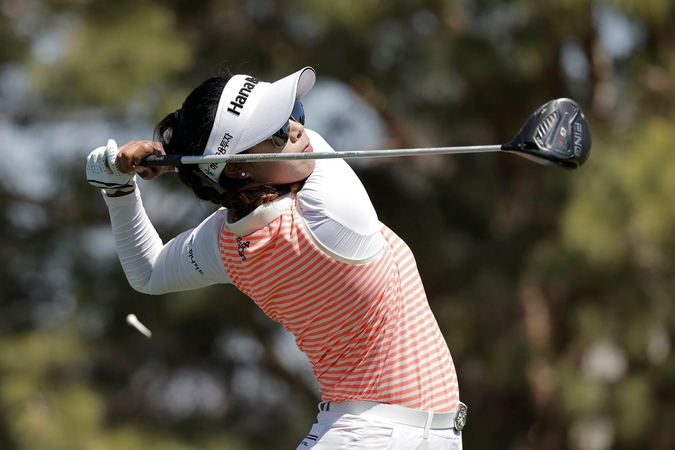 For the second consecutive day, Paphangkorn "Patty" Tavatanakit settled any major championship nerves to hold the ANA Inspiration lead after a second-round 69 to sit at -9 overall. The 2010/21 Tour rookie, who holds a 36-hole lead for the first time in her career, rebounded from a bogey on her first hole (No. 10) with a slam-dunk eagle on No. 15 followed by a birdie on No. 16 to pick up momentum making the turn.

“It was a little -- the wind was a little off the right. I've got 115 to the hole I think and the pin was pretty front. I only have five on, so -- and it was kind of windy. The greens are firm, so I wasn't going to play the short number, the front number. So I told my caddie, I was like, I'm just going to hit like a 107 shot. Everything is going far right now. It's probably going to land a little further, which it did, and just slam dunk in there. It was really good shot, a little bit of a draw spin in,” said Tavatanakit of the eagle. “I could feel it like moving right to left and towards the hole. I looked good and then I heard like (making noise) and it was a good feeling.”

Tavatanakit went on to birdie holes 2 and 4 but struggled with her putting on No. 7 as the winds picked up on Friday evening. Settling for two pars to close out the day, Tavatanakit said she’s up for the challenge of contending for her first LPGA Tour title.

“(I’m) pretty confident, but nothing too, you know, getting ahead of myself. I don't want to do that. That's a red flag right there. You don't want to be -- that to be in good position on the weekend,” said Tavatanakit, who won three times on the Symetra Tour in 2019. “Just keep doing what I'm doing and stay patient, stay with the present. I been doing that pretty well today. Just listening to different kind of sounds out there and just being in my own world.”

Close behind is Shanshan Feng after a second-round 69 to sit in solo second at -8. Feng persisted through a roller-coaster of a front nine, carding four birdies and three bogeys before making the turn. Staying patient turned out to be the key for the two-time major champion, who closed with birdies on Nos. 17 and 18.

“I didn't really expect myself to shoot a bogey-free round yesterday, so I expect on this course, especially my first tournament coming back, I am going to have some mistakes. And so, you know, I just missed a few fairways and few up and downs and so I made some bogeys. I was very like fine with it because I expected it,” said Feng. “But I felt really happy that after that, I mean, I started to hit more fairways on the back, so be able to hit more greens and have more birdie chances. Coming back on the back nine I think was pretty well done.”

Feng, who said she slept for 14 hours Thursday night, said she was more happy about playing again on Tour and making the cut then being in contention at the season’s first major.

“I didn't really focus on how I was playing. I was trying to find out, you know, the same feeling like how I was reacting on the course and if I was enjoying everything on the course,” said Feng. “Yesterday people said coming into this booth they couldn't tell if I shot 5-under or 5-over, so still the same. I mean, all I can say is that I really enjoy the whole time on the course. Doesn't matter if I was playing well or not.”

Moriya Jutanugarn, who carded her career-best finish at Mission Hills Country Club in 2018 (T6), is third at -7. “It was another pretty solid round for me. You know, just have to be a lot of patient out there. Seems like the wind blowing starting this morning and it's just make it different,” said Jutanugarn. “Just like trying to be patient out there and just take it when I can.”

A total of 71 players made the cut at +1, tying the record for the lowest cut in ANA Inspiration history, last recorded in 2018. The lone amateur in the field, 2020 Women’s British Amateur Champion Aline Krauter, will miss the weekend after finishing +3 overall.

TRIO OF KOREAN MAJOR CHAMPIONS IN THE HUNT HEADING INTO THE WEEKEND
The flurry of names tied for sixth includes three notable Korean compatriots who have all made the jump into Poppie’s Pond – defending champion Mirim Lee, who won the 2020 championship in a playoff; Jin Young Ko, who took a three-stroke win in 2019; and Inbee Park, a four-stroke winner in 2013.

A second ANA Inspiration title could vault Park back to the top of the Rolex Rankings, a position she has held for 106 cumulative weeks over her illustrious career. It would move her past Ko, who has held that spot for all but four weeks since she hoisted the Dinah Shore Trophy in April 2019. As expected, Park is not remotely focused on Sunday’s outcome. She has her eyes on the course and the temperature, which could reach triple digits over the weekend.

“It's just the heat that we have to watch out for,” said Park, who shot 69 on Friday. “The course is going to play firm and fast, which is a good thing, and obviously you just going to have a lot of energy to play in this heat.”

The temperatures have firmed up a perfectly groomed Dinah Shore Tournament Course and also garnered Ko’s full attention as she heads into the weekend. “It's going to be firmer than last two days,” said Ko. “I will focus on my game, on the course and I will just enjoy.”

For Lee, a strong finish would go far in helping her qualify for Team Korea at the Tokyo Olympic Games in August. Currently No. 31 in the Rolex Rankings, Lee needs to pass at least six of her countrywomen to potentially lock in a spot on what is perhaps the toughest team to make in the entire Games. It would seem that her second-round 70 was a step toward both a successful title defense and a trip to Tokyo, but Lee was focused more on how she could continue to improve heading into weekend action.

“My downswing is a little bit behind,” said Lee. “That's why ball is going left to right and right to left. So might fix it today.”

Note – There may be additional possibilities with tie scenarios and separate projection scenarios would need to be run to check.

MAJOR CHAMPIONSHIPS PUSH ANNA NORDQVIST TO EXCEL
“These are the ones that motivate me to go practice every day. If you get a little taste of it, it’s just such an incredible feeling.”

In 12 career starts at Mission Hills Country Club (including this week), Nordqvist has never missed a cut and earned six top-20 finishes. On top of that, she has played the weekend in 80% of the 56 major starts in her career, with 15 top-10s.

“I keep working hard and try to put myself in the same position again [and again],” said Nordqvist, who fired a 2-under 70 on Friday to reach -6 overall at the ANA Inspiration halfway point. “I feel pretty solid with my game and like it’s trending in the right direction. That’s really all I can do. I’m very happy with the game.”

INJURY CAN’T HOLD BACK CHARLEY HULL ON A FAVORITE COURSE

The Dinah Shore Tournament Course has historically been very kind to Charley Hull. The English star is competing in her eighth ANA Inspiration, dating back to her first appearance as an amateur in 2012. That debut performance brought her “worst” finish to date, a tie for 38th. Since then, Hull has never finished worse than 26th, including a runner-up finish in 2016, and revels in taking to the difficult track at the foot of the San Jacinto Mountains.

“I first played in this event I think when I was 15 years old, as an amateur and my dad was here with me. I just really love it,” said Hull, whose lone LPGA Tour victory came at the 2016 CME Group Tour Championship. “I just like it because it's quite a tight golf course and the rough can be thick and the greens are firm. I feel like that suits my game because I hit the ball quite high and I'm able to stop it where others find it quite hard.”

Hull missed the 2020 ANA Inspiration after being diagnosed with COVID-19 during the standard pre-tournament testing process. She had hoped that 2021 would go off without a hitch, but she sprained her ankle while out for a run last week in Carlsbad before her final round of the Kia Classic. Thankfully for Hull, it was more a case of injured pride and she sits in a tie for fourth heading into the weekend as she searches for her first major title.

“Beware the injured golfer they say. Yeah, I literally went for a 5K run, fell over a pothole and banged my chin. I was more embarrassed at the time. It didn't really hurt. Carried on with my 5k, played 18 holes at the Kia, and wasn't until after, until I sat down for an hour and I stood up and couldn't walk on it,” said Hull of her mishap. “I rang my friend Jason who used to work for me as a physio. He told me to ice it and I listened to him and it worked a lot, then the guys here have been strapping it up for me. Feels loads better.”

EUBANKS: POPOV AT HOME NEAR THE TOP

It’s every week now. Since Sophia Popov won the AIG Women’s Open last summer, she hasn’t missed a single cut. That’s a nice story, one worth mentioning. But she’s even better than that. Popov seems like a regular now on the front page of the leaderboard, a fixture on the Golf Channel leaders graphics, always at or near the top.

This ANA Inspiration is no exception. Once again, a quick gander down the board shows the ebullient 28-year-old a stone’s throw from the lead going into what is supposed to a boiling hot weekend at Mission Hills.

“Yeah, it's nice talking to you guys every week,” she said at her post-round press conference on Friday after shooting 69 in windy conditions to reach 5-under par. “I know things are going well (when you want to talk to me).”

Popov came into the desert with two top-10s in four starts this year. She was a Saturday hiccup at the Kia Classic away from perhaps making it three out of four. And in major championship conditions with firm, fast greens and gnarly rough – anything but fun – Popov continues to smile and joke and engage. She’s stress-free, like every round is a Wednesday pro-am.

“I'm just a lot calmer out there,” she said of her positive vibe. “I'm enjoying myself. I'm hitting good shots. I wouldn't even say every part of my game is 100% right now. But I think the confidence is really giving me that little edge. When a round could go one way it's going the other way just because I feel like I don't have a lot to lose. I'm not sure why I feel like I'm in that position, but I think I am. I'm just kind of going out and creating as many chances as I can and going along and trying to make birdies.”

Even without her game at 100%, Popov has had one bad hole in two rounds, a double bogey at the seventh in round one. Since then, she’s played her last 29 holes with seven birdies and no bogeys.

“If it's stress-free and you're making a lot of pars, that always feels good,” she said.