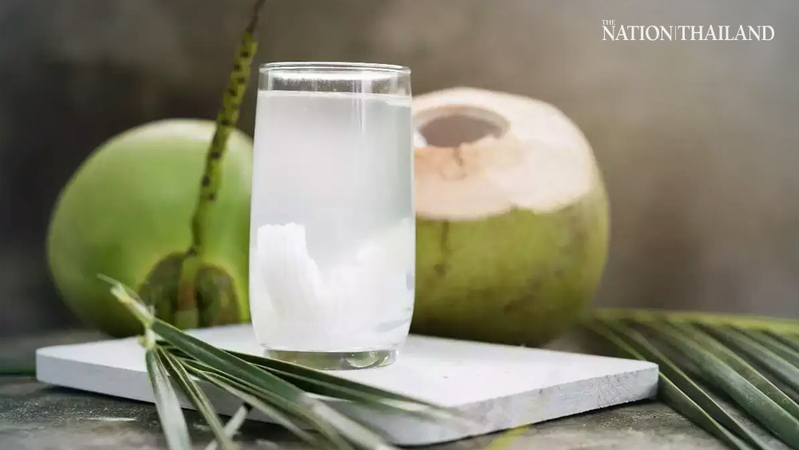 Why fresh coconut water is better than canned version

Fresh coconut water has more nutritional value than coconut water in a sealed container, according to a study by the Bureau of Quality and Safety of Food under the Department of Medical Sciences.

The analysis showed that calcium, magnesium, sodium, potassium, phosphorus, manganese, iron, zinc, selenium and chloride in fresh coconut water were greater than that found in coconut water in a sealed container.

Vitamin B2 found in fresh coconut water was less than 0.01mg per 100 millilitre, but not found in processed coconut water. This is because vitamin B2 is water-soluble and is easily destroyed by light. Vitamin B3 also was found in average amounts of 0.04 - 0.1mg per 100g because Vitamin B3 is more resistant to heat and light.

Meanwhile, testosterone is less than 0.2 nanograms per ml.

The pH value was found to be in the range of 4.9 - 5.4 and no residue of the chemical was detected.

Supakit Sirilak, chief of the Department of Medical Sciences, said that the study showed coconut water had a high content of minerals and mineral salts.

The glucose, fructose and sucrose found in fresh coconut water was consistent with the research that fresh coconut water had higher glucose than other sugars (approximately 50 per cent of total sugar) and their sugar content depended on the age of the coconut. Young coconuts will have a higher sugar content than mature coconuts. Coconut water in a sealed container has high sucrose, which may come from sugar added to it during the production process to flavour or add sweetness. Consuming water from 1 coconut, or 1 bottle (approximately 200 - 300ml) will yield 7 - 25 grams of sugar.

The Department of Health recommends no more than 32 grams of sugar per day, so people should consume only one coconut per day, which helps to maintain good blood sugar levels.

Also, research by the Food and Agriculture Organization found that good quality coconut water should have a pH between 5.0 - 5.4.

Studies on the effects of consuming coconut water on the reproductive system have shown that it can stimulate the endocrine system, which regulates the secretion of sex hormones, and has an effect on the reproductive organs of the female and male along with helping to make the sperm stronger.

Therefore, drinking coconut water may be one of many factors for enhancing sexual function which can be the result of many minerals in coconut water, such as potassium, zinc, manganese and vitamins that help the circulatory system work better, resulting in a healthy body, the study said.