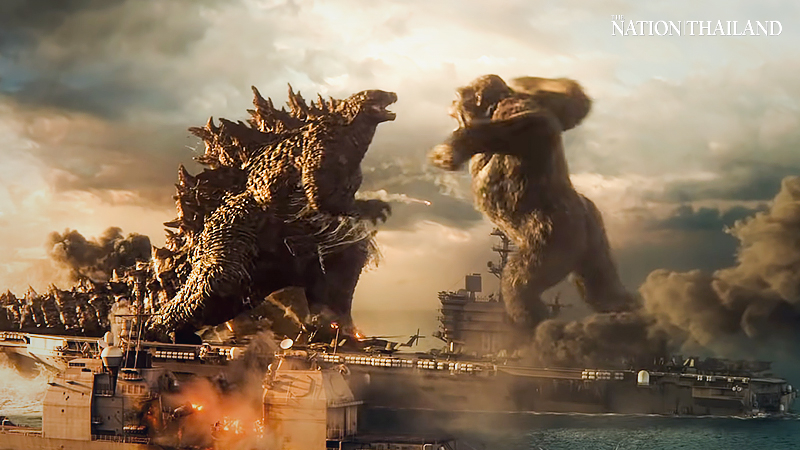 "Godzilla vs. Kong," the Warner Bros. and Legendary action film, is drawing the largest weekend crowds to movie theaters since the start of the Covid-19 pandemic more than a year ago.

The monster movie brought in ticket sales of about $32.2 million between Friday and Sunday in North America and $48.5 million over the five-day Good Friday holiday period, according to researcher Comscore Inc. The domestic sales were roughly double that of "Wonder Women 1984," the previous best weekend opening in the pandemic era.

"This is the best news the theatrical side of the business has had in over a year," said Comscore senior media analyst Paul Dergarabedian, adding that the results proved that a big budget sci-fi action extravaganza like "Godzilla vs. Kong" is "tailor-made for the immersive and impactful experience that only the big screen can provide."

The movie theaters badly needs the jolt. Ticket sales have fallen more than 85% from a year earlier, according to Comscore, and theaters are only reopening slowly, with more than half now back in business. They're also imposing strict limits on how many customers may attend at one time.

Still the early returns -- with audiences again willing to turn out for major-budget films -- suggest there's pent-up demand, even with studios making their best releases, including "Godzilla vs. Kong," available online.

"We may not yet be talking about pre-pandemic box office levels, but for this film to come out of the gate swinging shows how eager audiences are to return to movie theaters," said Shawn Robbins, chief analyst at Boxoffice Pro. "This is one of the necessary inflection points the movie industry has been waiting and hoping for."

The film, starring Millie Bobby Brown and Alexander Skarsgard, also had a large international premiere. It scored the biggest foreign opening in China in at least 15 months, generating about $137 million in ticket sales there. Its worldwide sales now have reached $285 million, Comscore said.

Analysts and industry insiders have been predicting this type of popcorn film would draw fans back to the big screen. Big-budget action movies, particularly those with recognizable characters like King Kong and Godzilla, tend to sit atop the box office. However, studios mostly held back those releases until more theaters reopened and more moviegoers could gather.

Now, cinemas have reopened in every major U.S. market. AMC Entertainment Holdings Inc., the world's largest theater chain, said Thursday it has reopened 99% of its locations. "Godzilla vs. Kong" will probably show about 80,000 times across the U.S. between Friday and Sunday, according to Boxoffice Pro.

By comparison, "Wonder Woman 1984" screened 50,000 times during its opening weekend over Christmas and brought in about $17 million in ticket sales over that span. Both movies were also available on HBO Max the same day they came out in theaters, at no additional cost to subscribers.

"The Unholy," a horror film, took the No. 2 spot with $3.2 million, according to Comscore. "Nobody," a thriller from Universal Pictures that debuted last weekend, came in the third. Walt Disney Co.'s "Raya and Last Dragon," an animated film about a warrior girl, ranked No. 4 with ticket sales of $2 million.