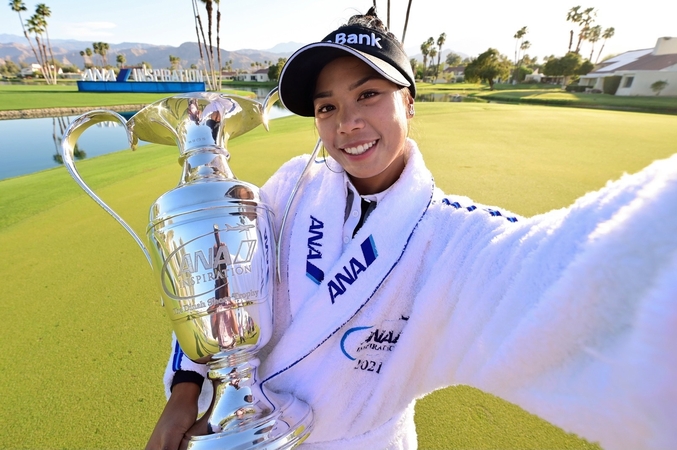 The 21-year-old Thai carded an unblemished final-round 68 for a total 18-under-par 270 to beat the inspired Lydia Ko of New Zealand by two stokes for her first career win.

Patty became the second Thai to triumph in a Major event after Ariya Jutanugarn at the Women’s British Open in 2016.

She is also the fourth Thai winner on the LPGA. Ariya was the first when she won the Yokohama Ture LPGA Classic in 2016 while her elder sister Moriya emerged winner in the Hugel-JTBC LA Open two years later. Thidapa “Jasmine” Suwannapura was the third Thai victory, at the 2018 Marathorn Classic.

“It's amazing I'm still calm, there is some calmness in me. I don't know why. But like I said, I just wanted it to be done since this morning; didn't get a lot of sleep last night. But I meditated twice this morning. Just be patient. I knew it was going to be hard out here and I got to be really strong mentally,” said Tavatanakit, who became the season’s first Rolex First-Time Winner. “So it feels great to be a major champion. It still hasn't really sunk in yet the fact that I'm like, I just turned 21 six months ago and now I'm a major champion in my rookie year. Just crazy.”

Tavatanakit started the day strong with an eagle on No. 2, chipping in from off the green. A birdie on the eighth had her making the turn at -17, and a bogey-free effort in her final nine holes, highlighted by a birdie on No. 12, was enough for to pull out the two-stroke victory. The three-time Symetra Tour winner became the 19th player to earn her first major title at the ANA Inspiration, a moment not lost by the young Thai native as she completed her round on the island green.

“I was happy and excited and I got a little emotional, but I just kept telling myself, It's not over yet. You still have to try your best to make the putt or to two-putt that,” said Tavatanakit, who was greeted by a slew of her fellow Thai players, spraying her with champagne. “I think Ryan, my caddie, saw me got a little bit emotional and he said, Come on. Let's focus on the last one, which I did. I feel like I just pulled myself out of the emotional state and back to where I needed to be.”

Three groupings ahead, the 2016 ANA Inspiration champion Lydia Ko was firing on all cylinders with a nothing-to-lose attitude. Starting the day eight strokes back, Ko carded an eagle and five birdies to break the nine-hole ANA scoring record with a 29 and was inching closer to Tavatanakit’s lead. The 29 also tied the lowest nine-hole score of any major championship, last recorded by Sei Young Kim in the second round of her win at the 2020 KPMG Women’s PGA Championship. Ko ended the day posting a 62 to finish at -16, tying Lorena Ochoa in 2006 for the lowest 18-hole score at the ANA.

“To me going into today I didn't want to play conservatively. I just wanted to go out there and play as aggressively but as smart as I can, and I think to some point when you're so far behind, all you know is that you need to make as many birdies as you can. It was not a bad position to be in,” said Ko. “Sean [Foley] gave me a little pep talk on his way to the Masters while I was warming up today, and yeah, this place has so many great memories, me jumping into Poppie’s Pond with my family and team and having my second major championship win here, and even though we don't technically have friends here, the members were out watching us, and they've always supported me and all of us and they love seeing the LPGA here.”

Four players finished in a tie for third at -11: Sei Young Kim, Nelly Korda, Nanna Koerstz Maden and Shanshan Feng. Kim, Korda and Koerstz Madsen all posted 6-under 66s, with Feng pulling together a bogey-free 69 with three birdies on Nos. 11, 13 and 16.

“Feeling very good. I mean, I still missed like some of the putts, but I was watching the groups in front and behind, and looks like the greens are just kind of tough,” said Feng, who was competing in her first event since December 2019. “I mean, so finally I actually got a couple birdies out from the rough, from the fairway, so I was very happy about that.”

2019 ANA Inspiration champion Jin Young Ko finished in a tie for seventh with 2013 champion Inbee Park and LPGA Tour winner Ally Ewing at -10, with Megan Khang, Moriya Jutanugarn and defending champion Mirim Lee ending in a tie for 10th at -9.

The winner of the Rolex ANNIKA Major Award will be honored at the Rolex LPGA Awards at the CME Group Tour Championship, the culmination what is sure to be an exciting 2021 major season.

The leaderboard through the 2021 ANA Inspiration is as follows:

Ko mentioned after the final round that she would not have been able to put together such a historic performance without some words from her swing coach Sean Foley.

“Sean gave me a little pep talk on his way to the Masters while I was warming up today,” Ko said after her runner-up result, her second straight top-10 finish at the ANA Inspiration. “I was chipping, and my phone rang. He always goes, ‘What up, Lyds?’ That’s how he starts pretty much every conversation, and he said however many shots back I am is never too far away. He told me to go out there, play my own game and I said, ‘Yeah, I’m going to have fun and see where it takes me.’ He said all week to make sure and play with 100 percent conviction. I was able to do that the best today.”

Her front-nine 29 this afternoon also set the ANA Inspiration nine-hole scoring record and matched the mark for nine holes at a major championship, which was most recently recorded by Sei Young Kim in the second round of the 2020 KPMG Women’s PGA Championship.

With three top-10s in four starts so far this season, including a pair of runner-up finishes, Ko said she does not want people to think she is back but rather, she is right where she is supposed to be. And it all ties together on this Easter Sunday.

“I was actually thinking in my head, ‘I wonder if on the [Golf Channel] coverage they are going to be like, oh, Lydia Ko is back,” the 15-time LPGA Tour champion said. “I hope it’s not the sense that I’m back to a position where I was or where I could be. I just want to be the best version of myself right now.

“I’ve had so many different experiences, ups and downs since I was World No. 1, to this point and I think at the end of the day I’m not going to be the same person anymore. I think everything happens for a reason and I am in this position for a reason. All I can do is keep working hard and see where it takes me.

“This is another Sean thing. He said, ‘We’re always in the position or place that we are meant to be at that time.’ He said just because I win an event or miss the cut, that doesn’t make me a better or worse human being, and I think that kind of strips everything back. All day I had in mind that God has a plan for all of us. I just have to believe that, have faith and go on my journey. I might not know what that journey is, but I feel like it’s all laid out. All I can do is try my best at that exact moment.”

EUBANKS: THE ARRIVAL OF GOLF’S NEXT SUPERSTAR

Of all the impressive accomplishments Patty Tavatanakit achieved with her two-shot victory in the season’s first major – coming within a shot of Dottie Pepper’s all-time scoring record, sleeping on a lead every night, leading the field in driving distance by an eye-popping margin, and holding off one of the most impressive final-round charges in major championship history, a 62 by Lydia Ko – Patty making this championship her maiden win as a rookie might be the best. Annika didn’t do it. Lorena couldn’t pull it off. Inbee didn’t get it done. Pepper, Inkster, Judy Rankin, Patty Sheehan, Betsy King, they all won in the desert. But only Patty Tavatanakit made it her first victory as a rookie.

“Amazing,” the winner said, still dripping from her plunge into Poppie’s Pond after a closing 68. “It makes me feel accomplished.  You know, coming into this year I didn't really set any goals because I knew how tough (golf in general) was last year. I just wanted to come out and learn to be a better player.

“My dad kind of told me that if anything, you should set a goal of being inside the top 100 on the Rolex Rankings and top 60 on the CME (points list). But it’s been kind of my goal at the back of my mind, I really wanted to win. I told Grant (Waite) my coach about it. But I didn't expect to win here.”

That sort of honesty makes you love Patty T. even more. But then she spoke about the texts she sent back and forth with on Easter Sunday with her coaches, Pia Nilsson and Lynn Marriott of Vision 54.

Grabbing her phone, she read the messages.

“’Reality check,’” she said, reading what Nilsson and Marriott had sent her. “’You don't know if you're going to win or not today. You can play good and not win or you can play so-so and still win. You do want to make yourself proud by taking the best actions possible to manage yourself and your game plan. That was huge.’

“I took that really seriously. Just focus on what is 100% under your control, because the outcome is – you can't control it.”