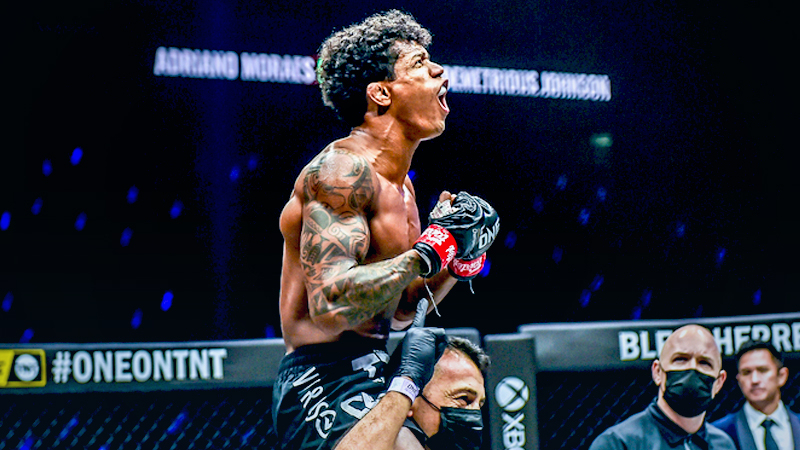 ONE Championship (ONE) returned to U.S. prime time with “ONE on TNT I” live from the Singapore Indoor Stadium.

The card featured a pair of ONE Super Series all-striking matches and four mixed martial arts fights, including a historic battle for the ONE Flyweight World Title.

Moraes utilized his height and reach advantage as he circled Johnson from the outside. Johnson tried to close the distance, but Moraes caught the challenger with an uppercut and knee before completing the stunning second-round finish with a barrage of ground strikes. It was the first knockout loss of Johnson’s storied career.

The co-main event between multiple-time Lightweight World Champion Eddie "The Underground King" Alvarez and #2-ranked lightweight contender Iuri Lapicus ended in controversial fashion. After a brief grappling exchange, the action was halted after the referee made the determination that Alvarez had landed illegal strikes to the back of the head, resulting in a red card and subsequent disqualification.

ONE Flyweight Muay Thai World Champion Rodtang "The Iron Man" Jitmuangnon was spectacular in his U.S. prime-time debut, winning a unanimous decision over "Mini T" Danial Williams after an explosive three-round contest. Williams came out firing from the opening bell, but Rodtang pressed the action and scored a knockdown in the second round with a sharp left hook. In the final round, Rodtang and Williams exchanged thunderous strikes in the center of the Circle to end the bout in style.

On the B/R lead card, welterweight contender Raimond Magomedaliev overcame a spirited effort from former ONE World Title challenger Tyler McGuire to earn a unanimous decision victory. In a rematch of featherweight kickboxing stars, Enriko "The Hurricane" Kehl edged out a split decision over the debuting Chingiz "Chinga" Allazov. And in a heavyweight clash, Senegalese sensation "Reug Reug" Oumar Kane pounded out Patrick "Big Swiss" Schmid for a TKO victory.