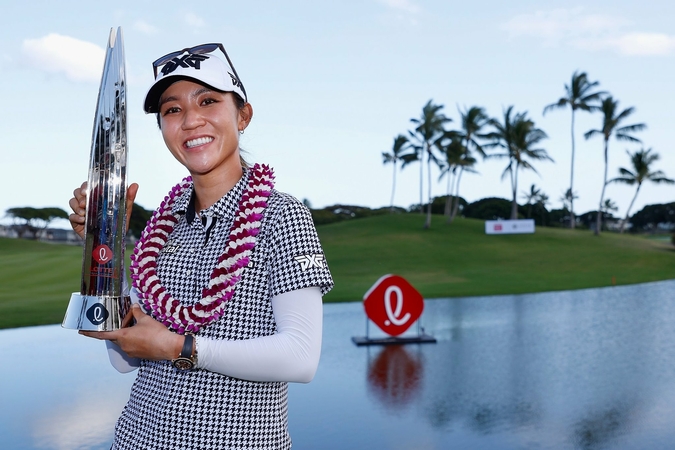 Lydia Ko entered the final round of the LOTTE Championship up one-stroke ahead of playing partner Nelly Korda at -21.

The last time Ko slept on the 54-hole lead was at the 2020 Marathon Classic, where she ultimately finished in a tie for second. But less than one year later, on the shores of Oahu, Ko secured her 16th win on the LPGA Tour after a final-round 65 to finish -28 for the tournament, her first victory in 1,084 days.

“Like I told my mom this morning, honestly, before Marathon I couldn't even sleep on Saturday night. Because even though I had been in that position before because it had been such a long time, I think I was putting a lot of pressure on myself and I know there were expectations. I slept great last night. I just said, Hey, my fate is all right chosen. I'm just going to play the best golf I can today. I hung in there,” said Ko. “I knew it wasn't going to be easy, especially around a golf course like this. Can go really low and it doesn't matter how far back you are, you can always be in it. I just continued to stick to my game plan, and I think this kind of -- it proves to myself. I think that's the biggest thing. I could be here with my team and family, so I'm super grateful that they're with me along this journey.”

Her 260 breaks not only her personal-best but also the tournament scoring record. Ko’s -28 is also the third lowest in LPGA Tour history, behind only Sei Young Kim’s -31 from the 2018 Thornberry Creek LPGA Classic and -29 from Shanshan Feng at Thornberry in 2019. Ko also recorded 29 total birdies, including a streak of four on Nos. 9-12 on Saturday. The 29 birdies also ties the Tour’s third-best number of most sub-par holes (birdies/eagles) in a single event, last recorded by Jessica Korda at the 2021 Diamond Resorts Tournament of Champions. Despite her impressive play in the final round, Ko said she never felt like resting on her laurels.

“I was quite a ways back a few week ago at ANA and put myself right into it, so I knew that could be the case today,” said Ko. “So I said to myself, even seeing that I had a six-shot lead, You know what? You just got to focus and do a good job with each shot. You don't want to make careless mistakes. I think I played smart and felt like I focused until the last putt dropped on the last hole.”

Ko turns around a record-setting performance at the LOTTE Championship and sets her sights on the HUGEL AIR-PREMIA LA Open. The New Zealander said she hopes to carry the momentum and every positive from her time in Hawaii with her through the next couple of weeks.

“I feel like when I'm hitting it with confidence and aggressive kind of mindset, that's when I hit it the best and play the best, because it's more free and I'm controlling it less. I don't know why I did that better this week than others, but I think I was being less tentative just sticking to my game plan. And if it was a tough driving hole, just hit it more aggressively. I felt it was -- felt great hitting a really solid drive down the last,” said Ko. “I guess things just clicked, and I don't mean like it clicked in a technical way, but I think it just clicked I think sometimes between the ears. I think just having my team to kind of always remind me of my keys, key aspects has really been helpful for that.”

Korda, who started the day at -20, finished with a final-round 71 to sit in a tie for second at -21 with Inbee Park, Sei Young Kim and Leona Maguire. Korda struggled on the front nine, parring her first seven holes until a bogey on No. 8, but said she was proud of way she bounced back through two bogeys and four birdies in her last nine holes.

“I'm happy with a second finish. You never complain finishing second in a tournament. Left a lot out there, but Lydia played so well. It was her time. But, yeah, every single time I put myself into these positions I learn from it. And my putter was definitely -- if there is a way for my putter to be dead, ice cold, my putter was dead today,” said Korda. “I mean, like it just happens in golf. You have these days. And thankfully I came in with a couple birdies and I fought back to finish tied second.”

Maguire secured her career-best finish on Tour with the tie for second at LOTTE, and said she’s known this kind of performance has been a continual work in progress.

“I played really nice this week. Drove the ball really well. Today was probably the best all week today. Irons were solid all week. Putted nicely. Not the best I've ever putted, but nicely. So everything is trending very nicely in the right direction,” said Maguire. “I knew Lydia was going to go low today and I was going to have to do something very special to try and catch her. Proud of the way I finished strong.”

LPGA Tour winner Jenny Shin felt she had nothing to lose heading into the final day of the LOTTE Championship. Starting the day in a tie for 36th, Shin said it was her goal to go as low as possible. “3-under feels like even-par here,” she said. Shin started strong with three birdies on her opening holes, later making four more on Nos. 7-10. By day’s end, the 28-year-old finished one-shot off the tournament’s 18-hole record, a 62, to secure a T6 result.

“I started with three great birdies. Made -- first two putts were not short so they were a great momentum picking up. And I had troubles on two holes, 11 and 12, so -- no, it was 12 and 13. I handled that well. Got up and down; made par,” said Shin. “I think that was a huge deal for me. I was able to make a birdie, two birdies closing in, so it was a great day overall.”

Shin said her confidence has been high since a top-10 finish at the Gainbridge LPGA, and had the 18-hole record in her mind as she made her way around Kapolei Golf Club. “That last putt I wanted it so badly and I hit it a little bit too firm and I was just like, Oh, my gosh,” said Shin. “I didn't really know where I was coming down until the last few holes. I was starting to count and I was like, Where am I? I really need to birdie the last two holes,. I did that yesterday, so I thought could totally be a possibility. Did the best I could, but, yeah, maybe not today.”

Shin started the week with a little advice from her boyfriend, who is native to the area and grew up playing Kapolei. She was impressed by the conditions of the public course and is thrilled to enter the HUGEL-AIR PREMIA LA Open with a chip on her shoulder.

“I was telling my caddie and my boyfriend as well, because he grew up on this golf course. I said, This is a public golf course, and to have this kind of condition on the greens was really surprising,” said Shin. “I'm looking forward to my Asia events. I've done pretty well in both Thailand and Singapore. This is a really good, and I look forward to it. So it's a great opening of my four-week run.”