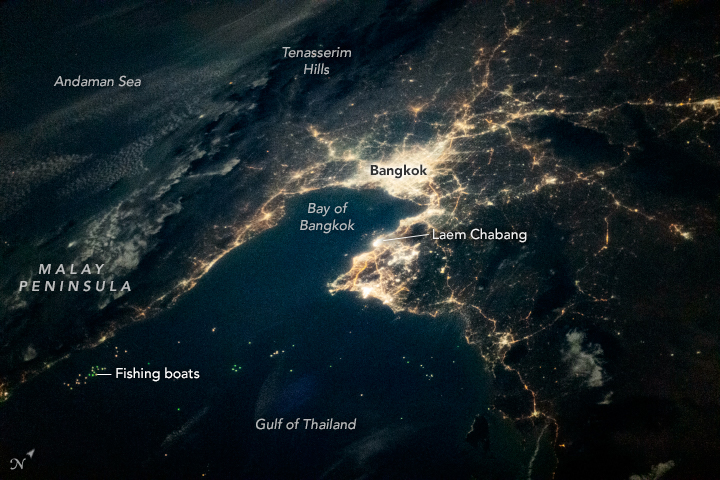 A dazzling view of Bangkok from space

This oblique photograph captures an astronaut’s perspective of Thailand at night as viewed from the International Space Station. The prominent lights of Bangkok — Thailand’s capital and most populous city — are the focal point, with the lights of other cities lining the coast of the Gulf of Thailand.

The dark swath of land in the top left is the Malay Peninsula, which separates the Andaman Sea from the Gulf of Thailand. The darker, forested Tenasserim Hills stand out from the lighter-toned, lower coastal plains to the east.

Bangkok is considered a "primate city", which is defined as a city twice as large as the next largest in the urban hierarchy of a country and twice as significant economically. Bangkok’s population of more than 10 million is many times greater than that of Chon Buri (population 1.4 million), the next largest.

City lights provide a visual indication of the high population density in and around the city centre.

Laem Chabang is visible along the eastern coast of the Bay of Bangkok. It is the country’s largest deep seaport and sees most of the international shipping reach Thailand.

The green dots sprinkled throughout the Gulf are fishing boats using lights to attract plankton and squid. Fishing is an important industry, as most of Thailand’s consumption of animal protein comes from seafood.

Companies around the Gulf of Thailand are also among the largest foreign suppliers of fish to the United States.

Astronaut photograph ISS064-E-37842 was acquired on February 26, 2021, with a Nikon D5 digital camera using a focal length of 58 millimetres. It is provided by the ISS Crew Earth Observations Facility and the Earth Science and Remote Sensing Unit, Johnson Space Center.

The image was taken by a member of the Expedition 64 crew. The image has been cropped and enhanced to improve contrast, and lens artifacts have been removed.

The International Space Station Program supports the laboratory as part of the ISS National Lab to help astronauts take pictures of Earth that will be of the greatest value to scientists and the public, and to make those images freely available on the Internet. Additional images taken by astronauts and cosmonauts can be viewed at the Nasa/JSC Gateway to Astronaut Photography of Earth.