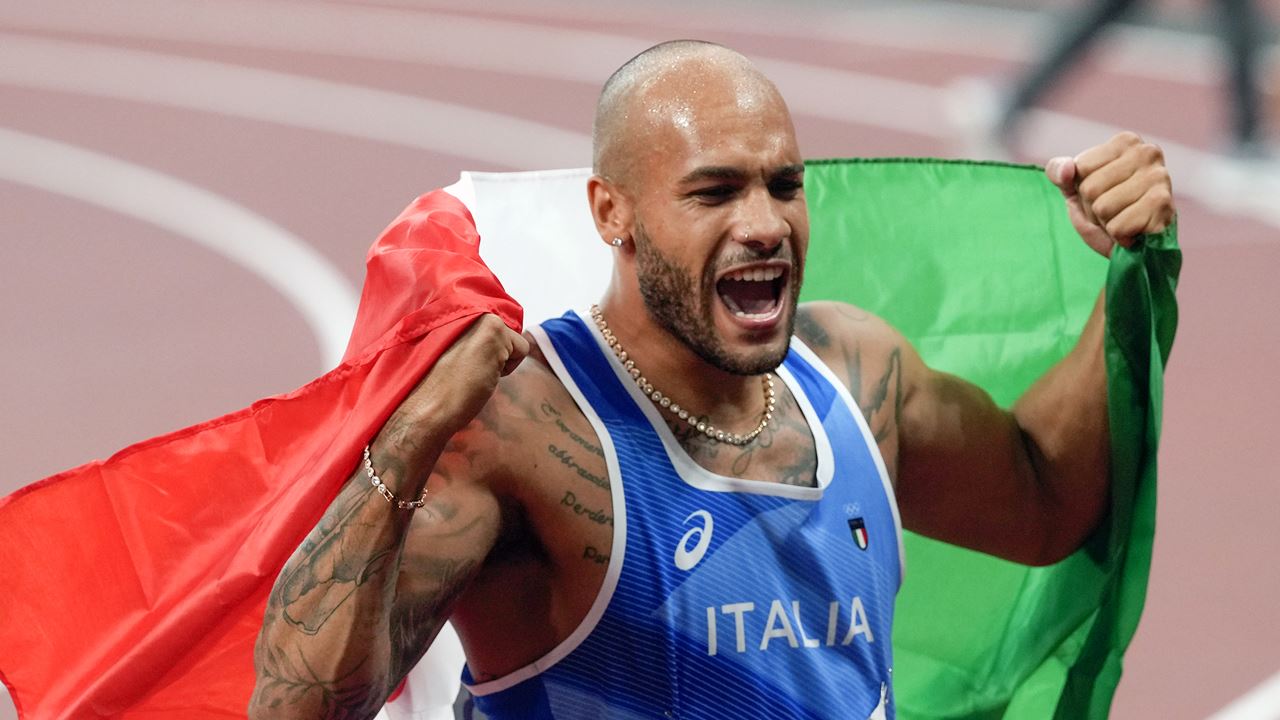 The message read: "You can do it. We are with you."

Jacobs dreamed to make the final of the men's 100 meters at the Tokyo Olympics. No Italian man ever had, and despite the place of his birth, Jacobs identified fully as Italian. Lamont Marcell Jacobs Sr. conceived a child in Texas with an Italian woman in the mid-1990s. When Jacobs was 6 months old, his parents separated. Jacobs has not seen his father since. He spoke with him last year for the first time.

Jacobs believes his father was watching Sunday night, when the globe fixed its gaze on a strip of brick-red vulcanized rubber inside National Stadium. Jacobs dug his spikes into the blocks on Lane 3. He sprinted faster than he ever had before. In the first Olympic 100 meters after the retirement of Usain Bolt, the only three-time Olympic gold medal winner in the 100 and the undisputed fastest man of all time, the world received a shock winner.

A 26-year-old who until this spring performed on the periphery of elite sprinting, Jacobs won the 100 meters in 9.80 seconds and earned the unofficial title of fastest man in the world. The instant reaction within track and field was that nobody could have seen Jacobs coming. Jacobs did not, either.

Only the most ardent track and field followers would have even heard of Jacobs. Bookmakers made him somewhere between an 8-1 and 10-1 long shot. American Fred Kerley, who won silver in a personal-best 9.84 seconds, said of the man who followed Bolt as the champion, "I really didn't know nothing about him."

Late Sunday night in Tokyo, Jacobs started to introduce himself. The timing of his surge, for him, was not a coincidence. Last year, after a childhood, adolescence and young adulthood without a father, Jacobs reached out to his namesake. They have not visited in person, but they have become long-distance correspondents. They are not close - Jacobs said he does not know what his father does for a living. The budding relationship, 2 1/2 decades overdue, has given Jacobs peace.

"I lived all my life without that," Jacobs said. "When people asked me, 'Who is your dad?' 'I don't know. I don't know.' I tried to start a new relation with him. For me, it was really important."

Before 2021, Jacobs had never run the 100 in less than 10.03 seconds, a time that would not have qualified him for the final at June's U.S. Olympic trials. By the end of Sunday night, only 10 men had run 100 meters faster than him.

It is not Jacobs's fault that the history of track and field casts suspicion on sudden and immense improvement. The annals of the sport are littered with pop-up champions later revealed to be drug cheats. It would be unfair to accuse Jacobs. It would be incomplete not to acknowledge the context of his accomplishment. Jacobs deserves the benefit of the doubt, but his sport does not.

Jacobs credited his success to small tangible changes and one large intangible change. He tweaked the technique of his start. He improved his diet and ate more vegetables. Most important, he said, he changed his mentality at his most important moments.

"I really worked hard with my mind, because when I was arriving in the big moment, my legs don't work really good," he said. "Now my legs go really good when it's a big moment."

In February and March, Jacobs ran 11 60-meter races, a distance that requires a fast start, and finished first or second in all of them. In May, with help from a strong-but-legal tail wind, he broke 10 seconds for the first time, running 9.95. On July 9, his final race before the Olympics, he broke 10 seconds again, just barely, at 9.99 seconds.

On Saturday morning, Jacobs qualified for the semifinals by running 9.94 seconds, a personal best. That night, in his room in the Olympic Village, he played PlayStation with Italian high jumper Gianmarco Tamberi.

Jacobs expected the semifinal would be the most important race of his life. It would determine whether his dream would come true. He blasted off the line and ran 9.84 seconds - more than 0.1 seconds faster than he had ever run before the Olympics, an astonishing margin of improvement.

As Jacobs warmed up for the final, Tamberi approached the conclusion of a showdown with Qatari Mutaz Essa Barshim. After both jumpers failed at the same bar three times, they agreed to call it a tie - two gold medals would be awarded.

Jacobs surged from the blocks and ran with extreme power - had he been raised in the state of his birth, he could have been a great linebacker. Jacobs seized control after about 30 meters. He kept on leading. National Stadium's seats were empty because of coronavirus restrictions. Italian journalists stood, wide-eyed, and spoke in tones of ecstatic realization: "Italia. Italia! ITALIA!"

Jacobs screamed as he passed a clock that read 9.80. Tamberi sprinted at him, a red, white and green Italian flag draped over his shoulder, and leaped into Jacobs's arms.

"I love him," Jacobs said. "We are all two Olympic champions. This is amazing for we and for Italy."

The only man who had challenged Jacobs was Kerley, a muscular sprinter who was raised by his aunt. Kerley won the 400-meter national championship in 2017, and he figured to be a medal contender at that distance at these Games. Early in the year, at the urging of his coach, he dropped down to run the 100 and 200, a decision that drew criticism in track circles.

"I feel like it justified it," Kerley said. "You got to be happy with coming to the biggest stage of their career. A lot of people can't say they came to the Olympic Games. You got to let them know."

In Italy, the image of Jacobs and Tamberi wrapped together in the Italian flag would live forever.

The men's 100 may be diminished without Bolt, but it still delivered, as the Olympics tend to do, a cocktail of drama, history and backstory. Late Sunday night, an Italian born in the United States stepped to a microphone before a gaggle of mostly American reporters. He was asked what Americans should know about him.

"Hey, here I am," Jacobs said. "I am here. See you next year at the world championships."

They will be held in Eugene, Ore., in the country where Jacobs was born. Maybe his father will see him run. For one night, the greatest night he ever had, Jacobs believes the man with whom he shares a name was with him.