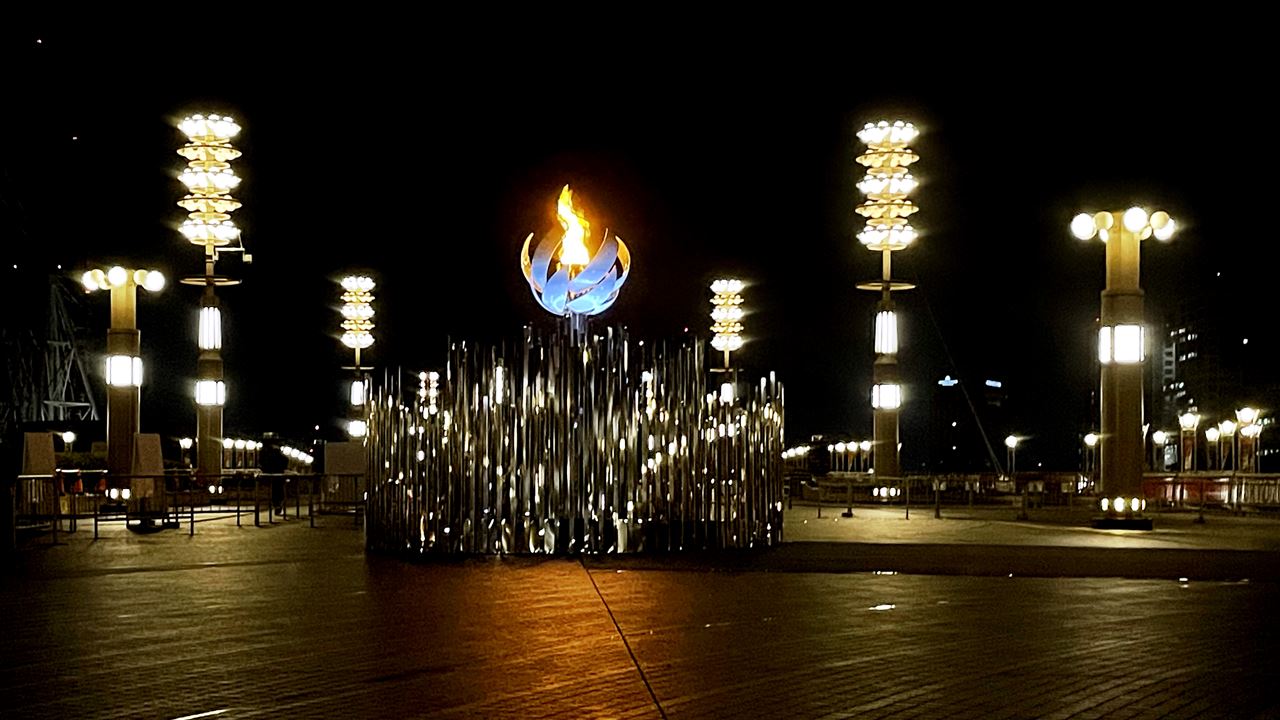 Late at night, on a bridge in Tokyo Bay, the Olympic flame burns alone

TOKYO - The Olympics have closed for the night, and the vast brick promenade that stretches between many of the competition venues is empty after 2 a.m. Normally at an Olympics, such a walk would be filled by a never-ending party. Tonight, in this pandemic-wary city, the lone sound is the clumping of a pedestrians feet.

And then beyond a small rise in the pathway, the Olympic flame appears, an orange glow in a silver cauldron improbably placed in the center of the promenade, a bridge connecting two man-made islands in Tokyo Bay. The flame is so low to the ground that from a distance it looks more like a flaming trash can than the everlasting fire burning from Olympics past.

It's a jarring sight. Olympic flames are usually robust things, anchored high above the main stadium, ignited on the initial night as a declaration that the Games are open. Even in these darkest hours just before dawn, Olympic flames are mighty and welcoming, an invitation to a 17-day festival. People stare at them in awe.

But these Olympics are the fulfillment of contracts, played before empty stands and amid resentment from much of the host country, whose people don't welcome the intrusion of outsiders during a pandemic. Each day, the number of positive coronavirus cases hits a new high in Tokyo. Hoisting a flame high above the city center seems a bad idea.

So, the flame is here, on a pedestrian concourse, connecting two sparsely populated places named Ariake and Aomi across a sliver of Tokyo Bay. It burns from a sphere of broken aluminum plates set inside a thicket of silver posts, guarded by a square of steel barricades discouraging anyone from coming too close. It can't be more than 15 feet high.

In the daytime, people come to see the flame. Some walk dogs; others carry parasols to shade against the scorching afternoon sun. Parents bring children. In the evenings, as the day cools and the sky turns a pastel hue, the flame can be a lure. Everyone pulls out phones, pointing cameras above the railings, careful to stay behind the signs that warn against stepping too close.

Guards lurk nearby holding speakers that tell the curious they must not linger long. Signs attached to street cones say photos can be taking only from one end or the other. The sides, they say, have to be kept open as a walkway despite the fact there are never enough people to clog the sprawling concourse. The crowds are steady but never significant. This isn't an easy place for many in the city to reach.

And now in the silence that comes well after 2 a.m., with most of Tokyo long asleep, the flame burns alone, apart from three policemen lurking along the bridge's edge. Tiny flashing red lights comically warn of a giant burning Olympic flame lying just ahead in the concourse's center.

The flame and surrounding streetlights reflect off the brick walk, this night clear, the promenade dry. Nothing moves but the flickering fire. Drawing close, one can hear it: Who knew the Olympic flame actually makes noise?

The sound is something like a furnace chugging through a winter night, a steady, sturdy mechanical undulation. Standing alone behind the barricades and hearing only that rumble, it's easy to imagine the flame is alive, to get lost in the dance of its quivering blaze.

Then the trance breaks. Amid the barriers and the flashing red lights, the flame has never looked this vulnerable, burning alone with only a few metal barriers and law enforcement officers to keep it safe.

These have not been the best of times for the Olympic flame. Its torch relay to Tokyo was greeted with constant scorn. Not long before the Games began, a woman tried to douse the torch with a water pistol. The flame's lone spectacular moment came when Naomi Osaka lit the huge cauldron inside the main stadium at Opening Ceremonies. Hours later, it was quietly moved here to the bridge between two islands in Tokyo Bay, hidden in plain sight.

And while other Olympic flames have burned on city streets - Rio de Janeiro, for instance, had a second flame in a historic part of town - they have been centerpieces, never afterthoughts and never alone. Never like this.

Now, in the silence of the dark night, someone else approaches, a man holding a camera. Boldly, he walks to the side to take a photograph, in defiance of all the signs prohibiting such actions. With no crowds to keep moving and no social distancing to ensure, there seems no reason not to.

The man bows. He pulls down his phone down and walks away. The policeman slides back into the darkness. The Olympic flame is alone again, shimmering proudly on a vacant bridge, performing its eternal dance for an audience of none throughout the silent Tokyo night.