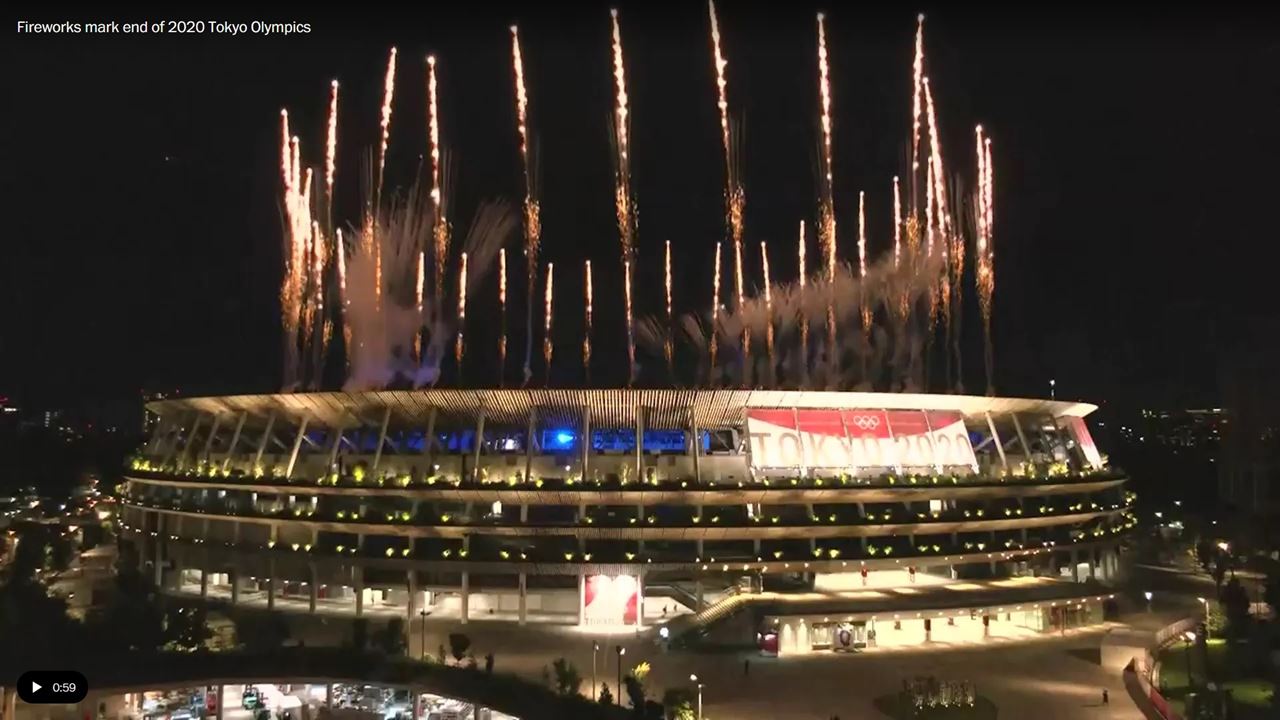 Olympic magic cut through the pandemic gloom, but the Tokyo Games legacy is complex

TOKYO - The flame that burned throughout one of historys most controversial Games was extinguished Sunday as Japan brought the curtain down on the Tokyo Olympics with closing ceremonies that were as unusual as the event itself.

Most of the athletes weren't even present; they were sent home within 48 hours of competing as part of the strict rules meant to contain the pandemic. For those who attended, organizers offered a show of music, juggling and dance that was supposed to replicate the experience of visiting a grassy Tokyo park - an experience that had been off-limits to athletes during the Games.

"In these difficult times, you gave the world the most precious of gifts: hope," International Olympic Committee President Thomas Bach told the athletes. "For the first time since the pandemic began, the entire world came together, sport returned to center stage, billions of people around the globe were united by emotion, sharing moments of joy and inspiration."

It was a fitting, bittersweet end to a complicated Games. While the ban on spectators meant the Games looked and felt nothing like the electric showcase of Japan for which organizers had hoped, the Olympics nonetheless provided a much-needed respite, a burst of joy and human wonder, for viewers around the world exhausted by the pandemic.

Day after day over two weeks, the magic of Olympic sporting competition cut through the gloom and isolation of the long coronavirus pandemic. Hour after hour, athletes emerged from long years of sacrifice, self-discipline and often adversity into the global spotlight and lit up the world's hearts with their modesty, grace and joy.

"Life seems very divisive just now. Everybody's in polarized positions and there's so much just controversy and frustration in life," British Olympic cyclist Chris Hoy told the BBC. "It's just wonderful to see the power of sport and the way it's brought us all together and reminded us about the Olympic Games and the wonderful role that it plays in all our lives."

"This Games, even though it was a struggle getting it to start and getting it going, I think ultimately it was the relief that a lot of people needed," he said.

New sports brought new audiences and new subcultures to the Games. The obvious camaraderie of the BMX riders, skateboarders and sports climbers shone brightly - and never more so than when 15-year-old Misugu Okamoto from Japan was carried off the skateboarding park on the shoulders of her fellow competitors after falling on her final run.

For Team USA, there were uncountable moments of enchantment, from 17-year-old Lydia Jacobs' shock victory in the 100-meter breaststroke to Allyson Felix's bronze in the 400 meters at her fifth Olympics, and her first as a mother, to become the most decorated female track and field athlete in Olympic history.

There was Sunisa Lee's emergence from the shadow of Simone Biles to win the women's all-around gymnastics, and the joy and relief for Biles herself when she won bronze on the balance beam after returning from her well-documented withdrawal.

There were Japan's judo brother and sister Hifumi and Uta Abe who won gold medals within an hour of each other, and Jason Kenny's seventh gold in track cycling on the final day to become Britain's most successful Olympian ever, beautifully capped by his fellow medalists lifting him on their shoulders on the podium.

For host country Japan, which suffered 18 months of anguish and anger over the pandemic-delayed event, there was a welcome burst of national pride as it recorded easily its greatest haul of 58 medals including 27 golds.

Japan proved to the world that, despite all the criticism, it could hold an Olympic Games in the midst of a global pandemic. Some of the rules, forcing athletes to wear masks on the podium and put medals around their own necks, might have seemed suffocating, but the thick web of restrictions ultimately proved effective in allowing the competition to go ahead.

Public opinion, so long skeptical or, in some cases, downright hostile, appeared to turn around, at least in part, with crowds turning out on the streets of Sapporo to cheer on the marathon runners in the Games' final days.

Yet there was still an emptiness, a sense of loneliness and even a bitterness that the joy and achievement couldn't wash entirely away.

The feeling that the International Olympic Committee (IOC) forced these Games on an unwilling public left an impression of arrogance and materialism, some critics said, and the sexist and discriminatory attitudes of Japan's conservative and elderly male elite in the run-up to the event was exposed to global scrutiny and caused national embarrassment.

There were signs of incremental progress: These were the most gender-balanced Games and the most diverse in terms of openly LGBTQ participation. The choice of Naomi Osaka to light the Olympic torch at the Opening Ceremonies was a well-received nod to Japan's marginalized mixed-race populations.

Japan boasted that it had used the Games to boost its citizens' participation in sport and exercise, sailing into a global head wind of rising inactivity, and significantly improved disabled access to everything from venues and Metro stations. On television, commentators talked more respectfully about mixed-race or transgender participants, even if intolerance and cruelty still raised its head on social media.

Yet the were also wounds, the biggest of which was partly self-inflicted.

Japan inexplicably dragged its feet over its coronavirus vaccination campaign, forcing it first to ban overseas fans and then even domestic spectators.

Olympians clustered in the empty stands to cheer their teammates along, but this made-for-television Games was deprived of the communal passion, the fervor and the fun that come with a hyped-up crowd.

Athletes clutching medals gamely waved at their far-off families on specially set-up video screens, but the absence of their families and friends was palpable.

Bach boasted that 1 out of 10 Japanese people had seen some part of the Games, but outside the fenced-off and policed competition venues, it sometimes felt as if the city of Tokyo had turned its back on the Olympics.

It's true there were some moments of enthusiasm: More than an hour before the closing ceremony began, Tokyo residents lined up outside the stadium to get the best views of the fireworks. But there was no trace of the festival atmosphere that the Games usually brings to its host cities.

Instead of welcoming foreigners with open arms and showing Japan's famous hospitality, the mood toward outsiders seemed at times to crystallize into silent mistrust of the tens of thousands of strangers who might be bringing in new strains of the coronavirus. Outward-facing Japan seemed to turn its face inward.

And all the while, in Tokyo and across Japan, the pandemic worsened, setting records with metronomic regularity. Daily cases rose by nearly four times during the two weeks of the Olympics alone.

The IOC and Tokyo 2020 organizers boasted every day of their extensive testing regime and how few people involved in the Games had tested positive - 430 since the beginning of July.

On Sunday, Tokyo 2020 President Seiko Hashimoto said there was no "medical or scientific" proof that cases had spread from the Olympics bubble to the general public.

But many public health experts were unpersuaded. They argued the Games undermined the government's already unconvincing calls for self-restraint and suggested the Olympic "bubble" was far more porous than organizers had claimed.

"I thought of the legacy of this Olympics," said Kenji Shibuya, the former founding director of the Institute for Population Health at King's College London who recently moved back to Japan to help with mass vaccination efforts here. "First, it clearly showed that unless the pandemic is tackled, a safe and secure Olympics is a fantasy."

Shibuya said the Games have "left a scar on Japanese society," causing division and distrust as well as a "health and economic debt."

The IOC will walk away from these Games with its broadcast revenue intact and its finances in good shape. The Japanese taxpayer, though, will be left footing a multibillion dollar bill, a huge hangover without having been invited to the party.

"The athletes should be the focus of the Games, and they have gone a long way in rescuing the extravaganza from the venal and feckless global sports aristocracy and Japan's political elite," said Jeff Kingston, a professor of political science at Temple University Japan.

But "the stories of resilience and indomitable spirits overcoming adversity" couldn't mask the unpalatable truths the Games exposed, he said.

"The Pandemic Olympics featured some glorious performances, but the empty venues made them an eerie rather than epic experience, a brief diversion from the surging delta curse."