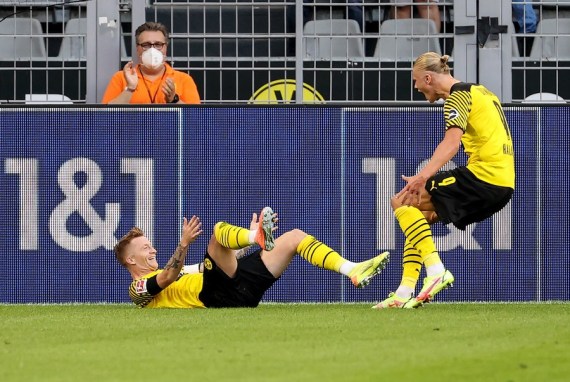 Dortmund ease 5-2 past Frankfurt in Bundesliga

Borussia Dortmund opened their German Bundesliga campaign with a 5-2 victory over Eintracht Frankfurt thanks to Erling Haalands brace.

Erling Haaland provided a brace in Borussia Dortmund's 5-2 victory over uninspired Eintracht Frankfurt in the first round of Bundesliga on Saturday.

The "BVB" dominated the proceedings from the starting whistle and kept Frankfurt's defence busy. It took the hosts, however, some time to produce clear-cut opportunities.

Even though Frankfurt lacked in penetration, the visitors leveled the scores out of the blue in the 27th minute when Dortmund defender Felix Passlack cleared the ball into the wrong goal.

Marco Rose's men remained unimpressed and restored their one goal lead moments later through Thorgan Hazard, who had all time and space in the box to beat Frankfurt goalkeeper Kevin Trapp.

Frankfurt couldn't put up resistance whereas Dortmund continued powerful to make it 3-1 after Haaland shrugged off a defender before sending the ball past hapless Trapp in the 34th minute.

Dortmund thought they had made it four but the video assistant referee disallowed Reus' second goal of the night five minutes before the break.

After the restart, the "Eagles" took over as Rafael Santos Borre came close twice. The striker's header on target got defused by Dortmund keeper Gregor Kobel before Borre pulled over the goal from promising position in the 55th minute.

Just when Frankfurt was on fire, it was Dortmund who made it 4-1 as Giovanni Reyna benefitted on a loose ball and poke home from five meters at the hour mark.

The "BVB" wasn't done with the scoring and killed the game with 70 minutes played when Reus sent Haaland, who finished the job with only Trapp to beat.

Frankfurt reduced the arrears against the flow on the game as Jens Petter Hauge tapped home a flicked corner from very close with four minutes remaining.

"A good performance by my team. It was about that we wanted to start well and that's what we did," Dortmund head coach Marco Rose said.

"Today we have to recognize that we had no chance. We made too many mistakes," Frankfurt head coach Oliver Glasner said.

On Sunday, Mainz host Leipzig while Cologne take on Hertha Berlin to conclude the first round in Bundesliga.