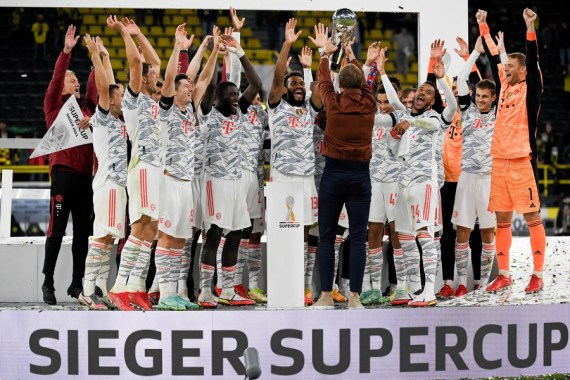 Robert Lewandowski's brace ensured Bayern Munich's first trophy of the season after moving 3-1 past Borussia Dortmund in the Supercup 2021 at the Signal Iduna Park on Tuesday.

As in tradition, the Supercup hosts the titleholders of the German Cup and the Bundesliga. Cup winners Dortmund and Bundesliga champions staged a fast-paced opening period without testing the goalkeepers.

Thomas Muller created the first clear-cut chance of the clash after 13 minutes but missed the target despite Serge Gnabry's good build-up work.

Bayern responded with two promising opportunities in quick succession, but for all that, neither Muller nor Lewandowski was able to overcome Gregor Kobel at the half-hour mark.

Dortmund continued to attack, but Youssoufa Moukoko's goal was ruled offside before Neuer had to be on guard to deny Haaland.

The opener was scored at the other end of the pitch though as Gnabry's cross into the area found Lewandowski, who made no mistake to head home from a central position in the 41st minute.

After the restart, the German champions started where they left off and doubled their advantage as Alphonso Davis raced down the left wing before squaring into the path of Muller, who poked home into the empty goal with three minutes played in the second half.

Despite the 2-0, Dortmund continued unimpressed and kept Bayern's defense busy as Haaland had another goal ruled offside in the 53rd minute.

Dortmund's efforts paid off at the hour mark when Jude Bellingham's square pass allowed Reus to unleash a hammer into the top right corner, halving the deficit from the edge of the box.

Marco Rose's men gained momentum and were about to take over, but Manuel Akanji's poor pass, deep in Dortmund territory, got intercepted by Corentin Tolisso. The Frenchman teed up for Lewandowski, whose second goal of the night broke Dortmund's resilience in the 74th minute.

"We are of course disappointed as we wanted to win. I think both sides staged an entertaining encounter over 90 minutes for the spectators. I saw a lot of good things but also a lot we need to improve," Dortmund head coach Rose said.

"We have defended very well in the first half and should have scored earlier. It is great to start the season with a title," Bayern head coach Julian Nagelsmann said.