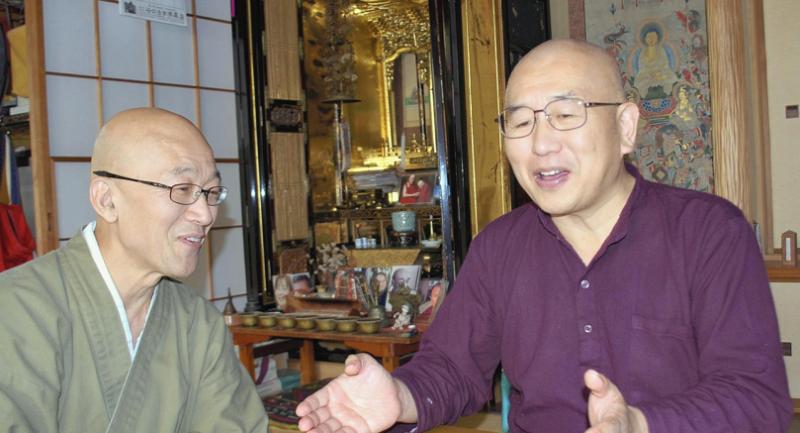 Issho Fujita, left, and Ryodo Yamashita explain how the number of people who participate in their zazen seated meditation and study sessions has been rapidly increasing. Photo/The Yomiuri Shimbun

The phrase “Buddhism 3.0” has been attracting attention in recent years but those who are not directly involved have little idea what it means,

Buddhist priests, Issho Fujita and Ryodo Yamashita, who proposed the concept, are suggesting a new version of the religion and this, disseminated through books written by the two priests, has been favourably received.

One of the books, “Appudeto Suru Bukkyo” (“Buddhism Updating Itself”), is a compilation of discussions between the two priests. The book was first published by Gentosha Inc in 2013, and is currently in its fourth print run.

The other is “Bukkyo 3.0 o Tetsugaku Suru” (“Philosophically Examining Buddhisim 3.0”), which records the detailed talks between the two priests and Hitoshi Nagai, a philosopher. The book was first published by Shunjusha in September, and is now in its third reprint.

The two priests and Nagai held a talk in October before an audience of about 100 people.

Neither Fujita nor Yamashita is originally from a religious background. They share the belief that they wish to resolve the problems of what they refer to as “one’s own life”, based on Buddhism.

They first practised Buddhism in training facilities in Japan before going to other countries, such as the US and Myanmar, where they both supervised zazen seated meditation and meditated themselves. After their overseas activities, they returned to Japan.

The two priests agree that Buddhism has several “versions”. Adopting the technical terms used in computer science, they categorise aspects of Buddhism into versions “1.0”, “2.0” and “3.0”.

In addition, they present a theory that the 1.0 and 2.0 versions of Buddhism have problematic points, but that it is all right to update them while maintaining the good points. The updated version is simply “Buddhism 3.0”.

Version 1.0 refers to existing Japanese Buddhism. Yamashita’s view on the present version is critical, saying that it is “a hospital where medical treatment is not provided”.

He thinks that there are hospitals (temples), doctors (priests) and patients (followers), but neither the doctors nor the patients believe that diseases can be cured – or that relief can be obtained.

Yamashita says that there is a deep nihilism in mainstream Japanese Buddhism.

Fujita concurs, saying, “Even among priests, they do not talk much about Buddhism.”

For this reason, Yamashita believes that version 1.0 can no longer save people who are suffering. As a result, people in recent years have been attracted to another kind of Buddhism, which the two priests regard as version 2.0.

Version 2.0 refers to Theravada Buddhism, and also refers to methods of reducing stresses through Buddhist meditation, and a psychological therapy called mindfulness. Both priests, though, have concerns about the spread of version 2.0 in Japan.

Fujita admits that mindfulness as a therapy has a certain degree of effectiveness.

But he points out that mindfulness is used as “a tool for people to make themselves better”, and thus it is different from the original Buddhism, which shows people the way of getting over their sense of “self”.

The two priests describe mindfulness as “muscle training for the mind” which is similar to merely treating symptoms.

The priests insist that people will not be able to clear their worries using the methods commonly employed by mind-training programs for eliminating worry.

According to the priests, as long as the root cause of a person’s worries lies in the belief that there is only “my mind and this world”, they need to get over their sense of self, including their past experiences, by fundamentally changing their template and their interpretation of the world.

This practice of “replacing one’s mind” is “the nature of original Buddhism” which has been forgotten.

Version 3.0 is also a movement recalling the forgotten nature of the religion and continuing its practice.

“The aim of Buddhism is to understand one’s worries, to go through them and to find a way to overcome them. It is not to destroy people’s suffering or make them forget about it, nor to try to comfort people,” Fujita says.

“People wrongly believe that they are clouds. But when they realise that they are not clouds but blue skies, the clouds will lose their meaning. Then suffering and worries will disappear,” Yamashita adds.

The two priests call on people to change their interpretation of the world.

Issho Fujita was born in 1954. He left a doctoral course in a graduate school at the University of Tokyo to become a priest of the Sotoshu sect. After spending time in the United States, he is now the head of the Soto Zen Buddhism International Centre, where he makes efforts to instruct and popularise Zen Buddhism. He is the author of “Gendai Zazen Kogi” (“Lectures on modern zazen seated meditation”).

Ryodo Yamashita was born in 1956. After graduating from Tokyo University of Foreign Studies, he became a priest of the Sotoshu sect. After spending time in other countries, including the United States and Myanmar, he left the sect. Currently he conducts instruction of zazen seated meditation at his base of Ippoan (One Dharma Hermitage) in Kamakura, Kanagawa Prefecture. He written works include “Honto no Jibun to Tsunagaru Meiso Nyumon” (“Instruction for beginners of meditation which can connect you to the true nature of yourself”).