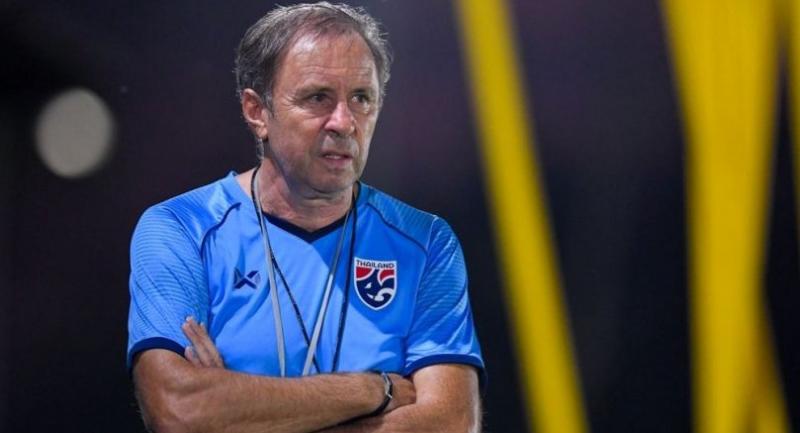 Your last chance: do this for Thailand or lose your job

Thailand coach Milovan Rajevac must find a way to lead Thailand into at least the round of 16 in the upcoming Asian Cup in order to secure his job, according to Thai football chief Somyot Poompanmuang.

The Serbian coach has been in a vulnerable situation after Thailand, as five-time champions, crashed out in the AFF Suzuki Cup semi-finals on the away goals rule to Malaysia.
Rajevac, therefore, has his last chance to plead in the Asian Cup which will take place in the United Arab Emirates from January 5 to February 1.
“The condition is he has to lead the team to a better result. That means the round of 16,” said Football Association of Thailand president Somyot. “By doing so, he will pass the test. If the team goes further, he is lucky. But if not, we have to on separate ways,” he added.
As two-time defending champion, Thailand failed to reach the AFF Cup final for the first time in eight years after a goalless draw with Malaysia in Kuala Lumpur and a 2-2 draw in the return game at the Rajamangala National Stadium.
Meanwhile, Rajevac yesterday revealed his 27-man squad for the Asian Cup and it consists of four key internationals: Chanathip Songkrasin of Consadole Sapporo, Theerathon Bunmathan of Kobe Vessel, Teerasil Dangda of Sanfrecce Hiroshima and Kawin Thamasatchanan of Oh Leuven.
Players will start training from next Tuesday and will play a warm-up match with Thai Honda, a local League 2 team, on December 26 after which Rajevac will trim his squad down to 23 players.
“We need a not-too-tough game to test the tactics and test each player,” he said. “Initially we planned to have a warm-up with Nepal but unfortunately they were committed to a local league.”
The Thailand players will fly to UAE on December 30 and take on Oman as their final warm-up before the Cup.
Thailand, in group A, will open their campaign with India on January 6, then with Bahrain on January 10 and the host on January 14.
The top two teams in each of the six groups plus the four best third-placed teams will progress to the round of 16 knockout stage.

Meawnhile, forward Mongkol Tossakrai announced his retirement from the national team after he was not included in the Asian Cup list. The 31-year-old said he will focus on his career with Army United from now on.