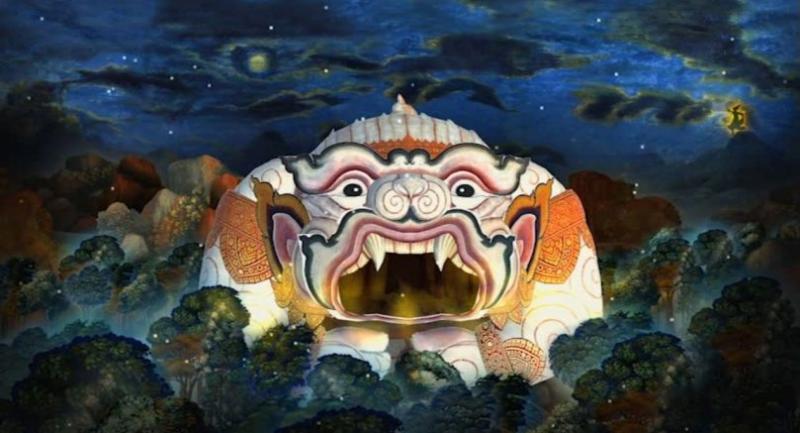 All visitors to the Grand Palace in Bangkok will have admired the murals that illustrate the 500 episodes of the Ramakien, the Thai version of the Ramayana. Yet few can claim to know the whole story of the epic. In textbooks it’s split into fragments and even khon (masked classical dance) performances tend to only to stick to one chapter at a time.
That’s all about to change thanks to the groundbreaking animation “Ramavatar : Murals Brought to Life”, which is being brought to selected theatres nationwide starting next month and at no charge to viewers.
Up until now, it has only been possible to visualise the whole story at Wat Phra Sri Rattana Satsadaram, aka Wat Phra Kaew or the Temple of the Emerald Buddha and while the murals stretch for more than two kilometres, it’s pretty well impossible to grasp the entire story in one visit.

Speaking at the animation’s premiere last week, deputy Prime Minister Wissanu Krea-ngam noted that the story is in every corner of Thai society yet hidden in plain sight. There are hundreds of Thai words we use in our daily lives that are from the Ramakien. Siam’s monarchs have always tried to tell the story, with King Phutthayotfa Julalok the Great, or Rama I, who made Rattanakosin the capital of Siam in 1782, presiding over a glorious renaissance of art and culture that would forever stand the test of time. The King commissioned court poets to author the epic “Ramakien”, proclaimed it the national play and had the Ramakien murals painted along the cloister walls surrounding the Temple of The Emerald Buddha.
“The great murals comprise 178 scenes telling the story from the beginning to the end, but few people have a chance to go through it frame by frame. The result is that they don’t know the whole story,” says Wissanu.
“This animation completes my dream to see the murals comes alive on screen. It brings the paintings on the wall to life,” he adds.
It’s taken more than a decade for culture buff and director Atipat Kamolpet to fulfil his dream. Twelve years ago, the director came up with the idea to bring the murals to the public in a multimedia format that blended khon with the artworks. Culture minister Vira Rojpojanarat –the ministry’s director-general at the time – set out to find funding to bring the project to life but it has still taken 12 years.
During that period, Atipat was granted funding to make the Dhammaraja episode in 2010 to celebrate the 60th anniversary of the accession to the throne of the late King Rama 9.
“The Ramakien is fun and its content relates more to our life than we realise. It crops up in everything from words, beliefs and entertainment. So I want to bring this to everyone,” Atipat says.

And so “Ramakien”, the play written by King Rama I, has become “Ramavatar: Murals Brought To Life”. Experts from various fields worked together, arranging for the mural images to be captured in gigapixel resolution for actual-sized representations. More than 1,000 important characters were photographed in detail. Character movements were based on khon dance poses. Special effects were added to enhance emotions and realism. A working group made up of the best minds in various disciplines finally succeeded in rejuvenating our national cultural heritage. The “Ramavatar” compiles hundreds of paintings from scenes 24 to 49 of the total 178 scenes at the Grand Palace.
“Ramavatar” picks up at the beginning of the story in heaven when the demon Nonthuk, who has been abused by the angels, is granted the powerful diamond index finger from Phra Isuan (Shiva). He uses the finger to kill masses of angels as he claims his revenge. Phra Isuan assigns Phra Narai to kill Nonthuk and so Nonthuk is reborn as the 10-faced and 20-handed giant Tosakant on Earth. Phra Narai is reborn as Phra Ram with a mission to take down all the demons including Totsakant. The conflict starts when Totsakant abducts Nang Sida (Sita), Phra Ram’s wife, and so Phra Ram starts a journey to the Kingdom of Lanka, along the way meeting the monkey chief Hanuman who helps him rescue Sida. The “Ramavatar” ends at the point when Phra Ram arrives in Lanka before a series of wars begin.
Kompin Kemgumnird, who directed the Thai animation blockbuster “Khan Kluay” and who is the animation supervisor on the project, says he and Atipat brainstormed on how far to go in the story and in what dimension but after developing it, decided to keep the power of the murals.
“I am glad to be involved in this project. After years working in animation, it is a good opportunity to learn our roots and make our animation work unique,” says Kompin.
And what better time to release the animation that this year, when Unesco has listed Thai khon as an intangible cultural heritage of humanity.
The entire project has cost Bt12 million, with all of it provided by the Culture Ministry.
Kompin adds that by using modern animation techniques, the team was able to keep the essence of the murals despite their flat dimension. They also studied khon to be able to properly adapt khon gestures to the animated movements.
“But even after we made the mural characters’ movement like khon, it still looked weird so we decided to keep the character of the murals as much as possible,” says Kompin.

The murals at the Grand Palace have gone through massive restoration work every 50 years in the Rattanakosin Era, which is now is its 237th year. To date, the murals have been restored four times, the major work taking place for the 150th year anniversary back in 1932. The restorations, says the director, always involve a degree of new drawing and painting. When the restorers started work in 1932, the original painting was so badly damaged that it had to be recreated. The new version is different in style with the characters given more muscle and an anatomy obviously influenced by the western art of fresco painting. In many ways, this made the gestures similar to khon movements.
“Producing the animation was inspiring. The production bridges two generations as we brought in khon artists to teach the animation team the postures,” says Atipat.
“The murals are a unique national treasure with their own identity and I wanted to keep it that way on screen. Obviously that comes with a price –it doesn’t look real and complete like the animation we are used to today. The audience should be open-mined in watching this film and allow themselves to be embraced by the beauty of our treasure.
Acclaimed movie director Nonzee Nimibutr, who is the producer, says that the animation attempts to entertain the audience and inspire the younger generation to learn more about the mural paintings.
The animation opts to use the Thai version of characters’ names, for example Phra Isuan instead of Shiva, Nang Sida instead of Sita and Phra Ram instead of Rama.
“It makes sense to do that as it is based on the Thai mural paintings,” says the director.
Largely narrated, the animation has little dialogue, though the major characters do speak. Actor David Asavanond is cast as the giant demon Tosakant.
“I’ve loved the Ramakien since I was young so I am very glad to join the project. I like the concept in the fight between good and evil. However, I am impressed by the role of Hanuman and the way that the universe is his playground,” says the actor.
As the mural painting has a flat perspective, the team has worked hard to match the details to the script, completing it by using technology and visual effects.
“When we look at the mural, we have a bird’s eye view so I shifted to eye level on the movie screen. From there we worked at giving the picture greater depth and adding colour and tone to show the beauty of the mural,” says the director.
Atipat is planning to produce two more parts to complete the story of Ramakien but is still struggling to find the funding. In the meantime, he is also working to get more sponsorship to allow him to take the animation to a wider audience.
“Ravavatar” will be shown nationwide starting over the Songkran holiday and will also show in Jakarta, Indonesia on April 24 and at Yogyakarta on April 25 when Thailand becomes the chair of Asean.

BOX
On a screen near you
“Ramavatar : Murals Brought to Life", will be screened at 2.30 and 4pm as follows:
April 13-14 at SF World Cinema at Central World
April 17-18 at SFX Cinema Central Khon Kaen
April 20-21 at SFX Cinema Maya Chiang Mai
May 4-5 at SFX Cinema, Central Festival Pattaya Beach
May 11-12 at SF Cinema Central Plaza Surat Thani
In the meantime, viewers can enjoy an interactive character introduction using the QR Code, which can be scanned through Line or QR Code Reader applications.
For more information and reservations, visit Facebook.com/ramaavatar.animation/.