The “6 months: Mother’s milk is all you need” (#6la) campaign, initiated by Save the Children, Unicef and Alive & Thrive and created by the independent Myanmar agency Bridge, has been recognised by a panel of regional communications experts for its compelling message and the impact it has had on new mothers in Myanmar.

Launched in August 2018, the campaign aimed to combat the aggressive marketing of baby formula and show that breastfeeding for the first six months is best for mothers and babies.

“Campaigns like these are critical to creating an environment where mothers feel supported to breastfeed their children. With so many formula milk companies using advertising to sell their products, it’s important that mother’s milk maintains its position as the undisputed best for babies, and is fed exclusively in the first six months of life,” said Andy Nilsen, director of communications, advocacy and campaigns at Save the Children.

“In Myanmar, where close to one in three children are malnourished, adherence to recommended breastfeeding practices has been proven to reduce child mortality and improve their health, nutrition and cognitive development. It is essential that parents have access to correct, unbiased information about how to best feed their babies. That’s why campaigns like #6la are so important," Hedy Ip, nutrition specialist at Unicef Myanmar, said.

Reaching close to 20 million people in Myanmar in Yangon, Mandalay and Nay Pyi Taw, the #6la campaign helped mothers understand the importance of feeding babies nothing but breast milk for the first six months.

“The nutrition, protection and love that mothers give their child in the first six months of life should be celebrated,” Donald Eastwood, Bridge’s creative director, said. 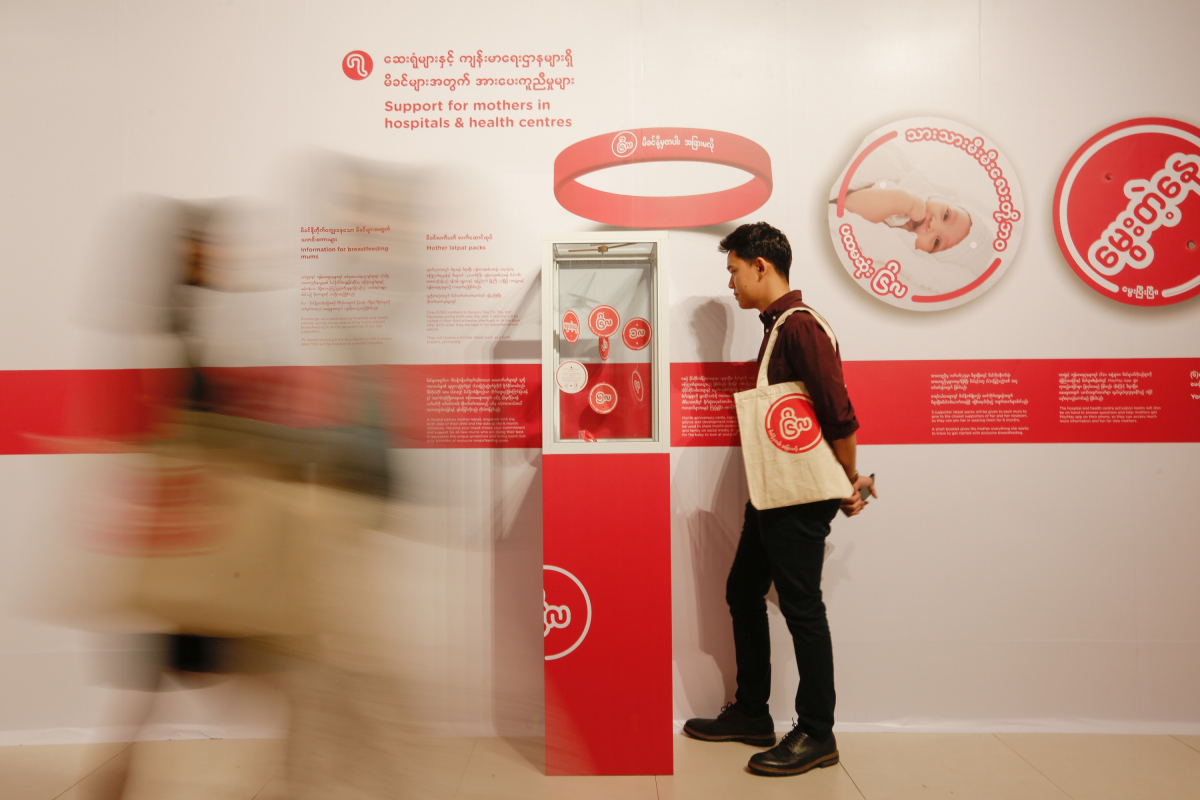 The #6la teams, including trained midwives from Myanmar’s Health and Sports Ministry, visited mothers just after they gave birth and at prenatal groups, giving them a commitment bracelet pack containing basic information. The mothers were also encouraged to join the mHealth app, MayMay, for additional information and long-term engagement, and were given the option of seeking commitment packs for other mothers.

“The team championed the friend, father, sister, grandmother and doctor whose support helps a breastfeeding mother and influences social norms around breastfeeding. Singer Sung Thin Par was our archetypal mother and exclusively breastfed her daughter for six months,” Eastwood said.

The campaign owes part of its success to the support it gained from influential personalities.

Mra Thitsa Than, strategic planner for campaign designer Vero, said: “It was crucial that the campaign addressed family members, neighbours, health specialists, as they weighed in on core decisions made by mothers as well. We know the great role social influencers play in Myanmar, and we worked hard to develop key relationships with influential personalities who could help us bring our message to the right people. By the end of the campaign, close to 50 top tier influencers had taken part in the movement, online or offline, and were advocating for exclusive breastfeeding.

“We also believe in the power of a comprehensive approach to spark social change so we rolled out our messages across communication platforms. We also worked with leading publications to write empowering and educational articles on motherhood and on the benefits of exclusive breastfeeding. We reached out online too through the MayMay app and its Facebook page.”

The power of the movement induced a snowball effect, taking onboard key players of Myanmar’s private sector as well. By the end of the campaign, KBZ Bank had established and announced its first breastfeeding room as well as a revised HR policy to include paid breaks for breastfeeding mothers and were showing the campaign film in over 500 branches.

City Mart also joined the movement, giving supporter bracelets to all staff members, selling supporter packs and giving the proceeds to the campaign as well as displaying messages across 38 supermarkets.

"Globally, a woman’s return to work is one of the key barriers to successful breastfeeding. By addressing real barriers to exclusive breastfeeding in a relatively short period of time, this has proven an important starting point for further advocacy to create more breastfeeding-friendly workplaces in Myanmar," said Roger Mathisen, program director for Alive & Thrive in Southeast Asia.

The campaign has helped break misconceptions about breastfeeding and has empowered mothers to make informed decisions. Testing before and after showed that three in five mothers recognise the brand, and more than 97 per cent of them agree that breastfeeding ensures a strong, healthy and happy baby.

After the campaign’s success last year, Myanmar’s Health and Sports Ministry is looking to see how the campaign can be used to support government efforts to improve nutrition across the country.