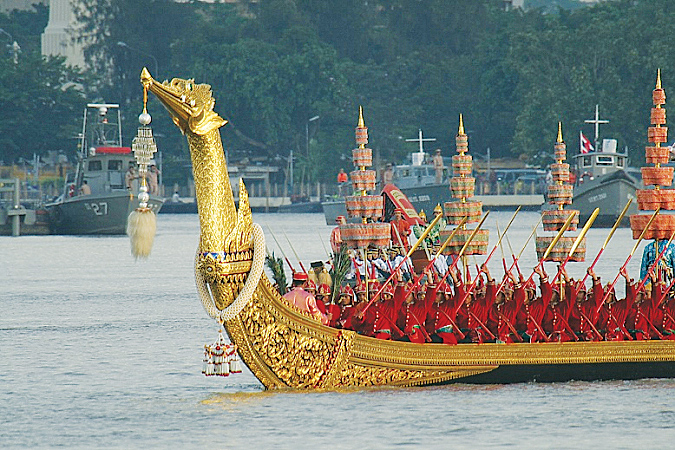 From the times of the Kingdom of Siam to modern-day Thailand, rivers have been at the heart of transportation for the people of this Kingdom.

Besides serving as a mode of transport, there are also many religious ceremonies associated with rivers. They have played a significant role in Thai culture, economy and politics. They have even had royal relevance, with many Thai kings travelling in processions on the river, surrounded by military and police barges.

At the beginning of the lent season in August, Buddhists have a tradition of making merit, called the Kathin ceremony. It is a religious occasion when the devout donate new robes to monks. In the past, communities mostly settled down by the river. The royal barges procession was held for the Royal Kathin Ceremony as well, as a reflection of not only the religious significance but also a depiction of His Majesty the King’s glory.

The first Royal Kathin Ceremony during the reign of King Rama X of the Chakri dynasty will take place on October 24. The event will showcase the rich cultural heritage of the Kingdom of Siam. His Majesty King Maha Vajiralongkorn Bodindradebayavarangkun will travel down the Chao Phraya River in a royal barge procession to present robes to monks as part of the Royal Kathin Ceremony, which will mark a grand finale of his coronation that took place in May. 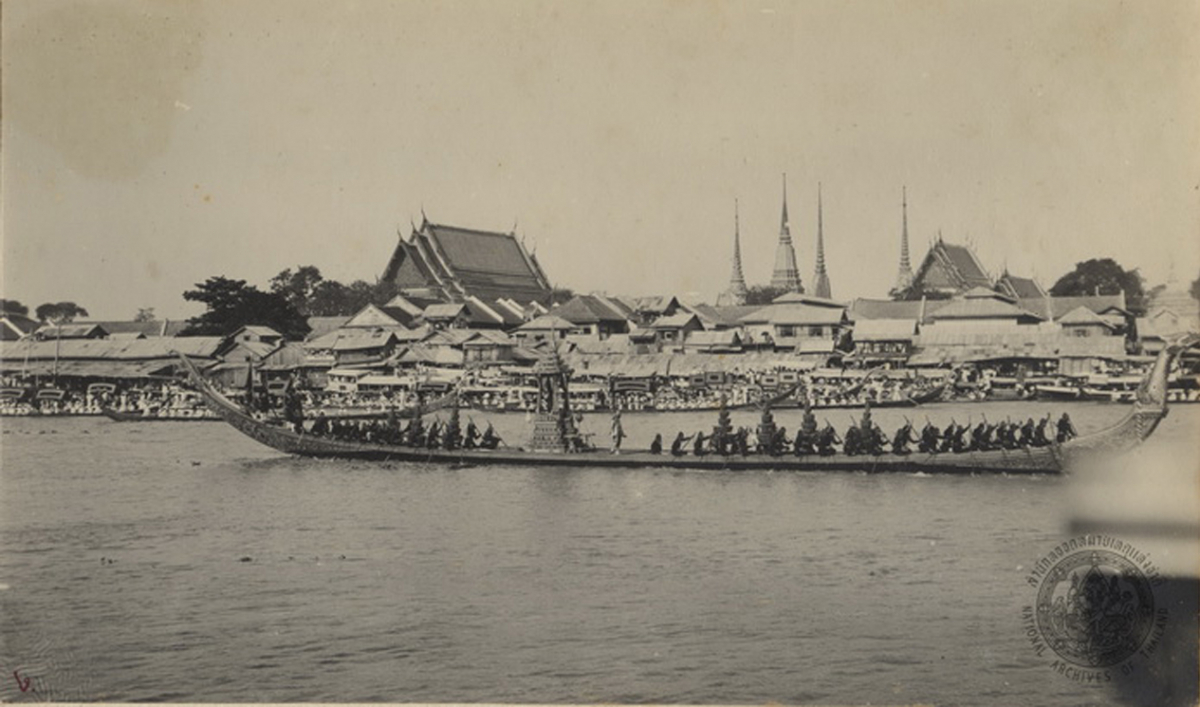 The history of these processions go back to the Ayutthaya period (1351-1776) when a large fleet of barges assembled on the rivers and rowed around the capital of Ayutthaya. Royal barge processions were held for various occasions, such as royal ceremonies, religious events, ceremonies to welcome foreign ambassadors, royal coronations and the Royal Kathin Ceremony.

Royal barge processions were organised for the Royal Kathin Ceremony when the kings travelled to a royal temple for Tod Kathin (making robes and other offerings to the monks). During this period, processions were composed of 33 types of barges; the king sat on a throne placed in the centre of the royal barge surrounded by items of royal regalia such as the state umbrella, fan, flag and four swords. To guard the king and his regalia, two general officers sat in front of the throne, watching for any kind of threat and always prepared to defend the monarch.

A Jesuit priest, who arrived when King Louis XIV of France sent a new ambassador to Siam, has described in detail the procession of more than 150 barges sailing down the Chao Phraya River to welcome them.

The event was held occasionally until absolute monarchy ended in 1932. During World War II, most of the royal barges kept near Thonburi train station were bombed and destroyed. The river processions stopped until the celebration of the 25th century of the Buddhist Era in 1957. In 1959, the Great King Rama IX revived the royal barge procession along with the Royal Kathin Ceremony in order to preserve Thai cultural heritage. 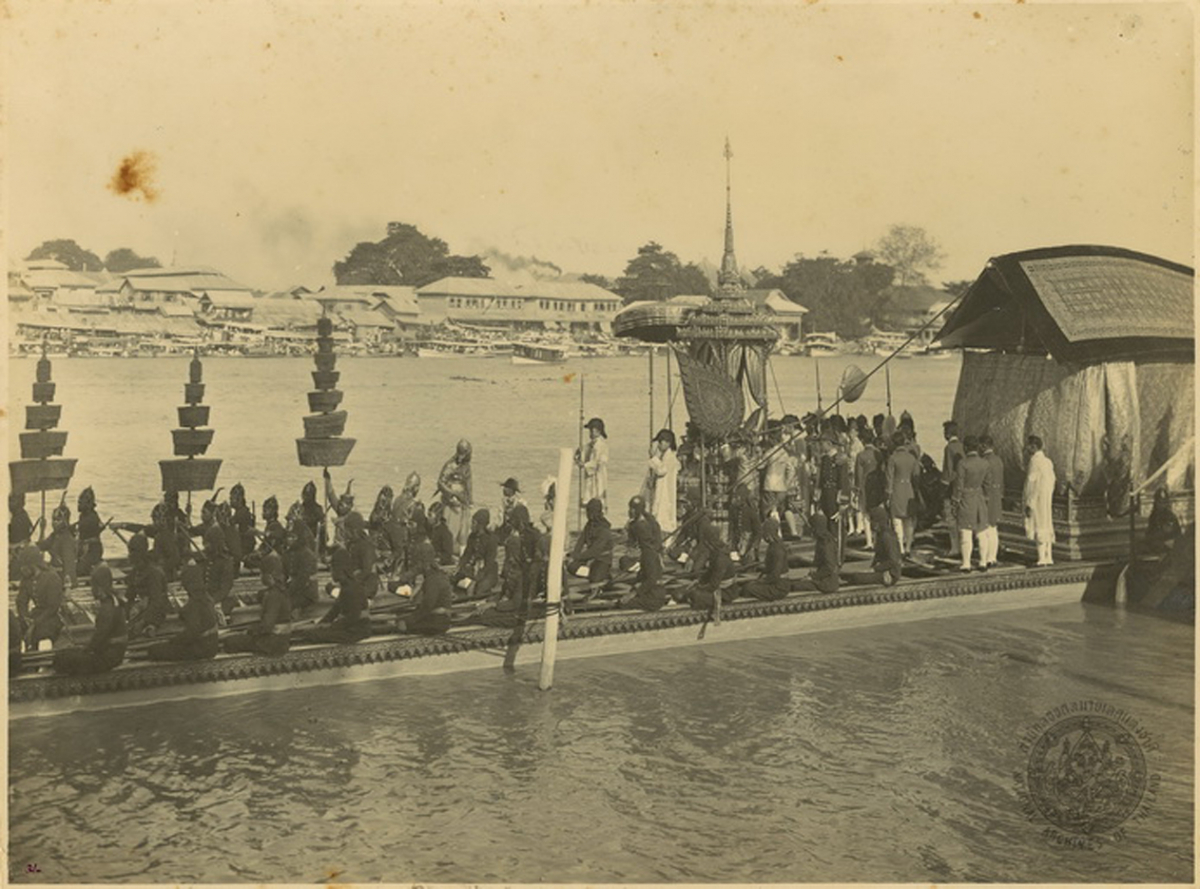 The royal barge Suphannahong (“the Golden Swan” or the “Phoenix”) was built in 1911 during the King Rama VI period. The barge resembles a mythical swan, or Hong. This 46-metre-long barge crafted from a single trunk is painted with golden lacquer and decorated glass, with a crystal ball dangling from the swan’s mouth. There is a golden pavilion on the barge to accommodate the king and the royal family. In 1992, the World Ship Trust honoured the royal Suphannahong barge as a world heritage.

The original royal barge, Anantanakkharat (“Ananta, the King of Serpents”), was built during the reign of King Rama III and was used as the primary Royal Barge of King Rama IV, while the current one was built during the Rama VI era. A distinguishing feature of this barge is the carved seven-headed Nakkharat, the mythical snake-like creature, on the bow in gold paint and glass with a green hull. Unlike the other royal barges that are equipped with pavilions, Anantanakkharat has a pagoda-like structure to carry holy objects.

The Royal Barge, Anekkachatphuchong (“A Variety of Serpents”), is the oldest of the four barges, built in the late 19th century during the reign of King Rama V. The hull is painted pink without any mythical figures on the bow but it is decorated with numerous ornamental small Naga figures. 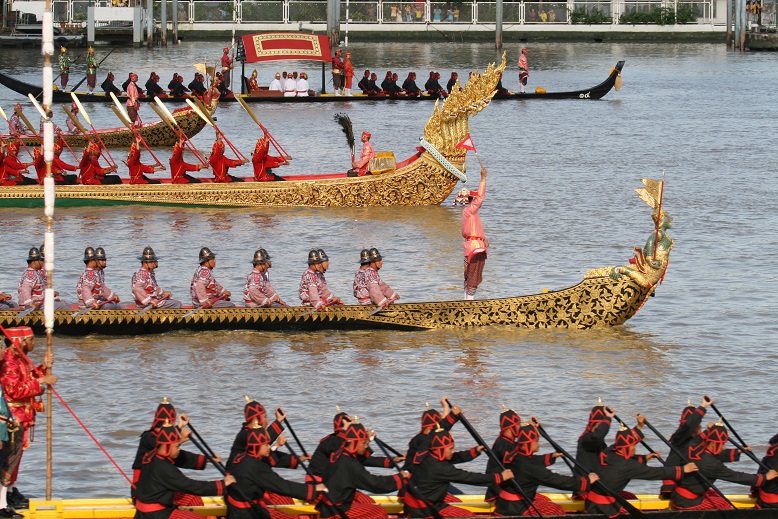 The royal barge Narai Song Suban Ratchakan Thi Kao or The Royal Barge Narai Song Suban HM King Rama IX (“God Narayana on his vehicle, Garuda”) is the only barge built during the reign of the late King Bhumibol Adulyadej, commissioned by the Royal Thai Navy and the Thai Department of Fine Arts in order to celebrate the fifth anniversary of King Rama IX’s accession to the throne. This barge has a striking red hull with the image of god Vishnu, commonly known in Thailand as Narayana, on a Garuda figure carved on the bow.