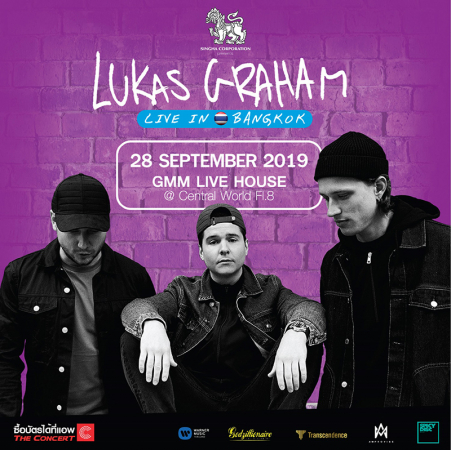 In a surprise for Thai fans, Lukas Graham is to stage their very first Asean concert in Bangkok this September 28 at GMM Live House, CentralWorld, Spicydisc announced on Tuesday.

The Danish pop band is known for its beautiful melodies, accompanied by the sound of piano, good musical arrangements, and their distinct ability to capture a full range of emotions in the song “7 Years”. That number was a phenomenal hit when released in 2015, reaching No 1 on the UK singles Chart and No 2 on the US Billboard Hot 100 and Adult Contemporary charts. It also peaked at the No 1 Adult Top 40 and Mainstream Top 40 at Billboard.

By the end of 2016, “7 Years” had sold 10.4 million units around the globe making it to the 7th best-selling song of the year, and the video will soon reach 900 million views on YouTube.

In addition, “7 Years” was nominated for three Grammy Awards – Record of the Year, Song of the Year and Best Pop Duo/Group Performance. This accomplishment, perhaps guaranteed by its many prizes and awards, reflects the quality of the song which was admired widely and popular internationally.

Moreover, there were lots of hit songs that won Thais over, including “Love Someone”, a pure and sentimental love song featuring the warm and friendly, simple yet sincere lyrics which touched people’s emotions and gained more than 200 million views on YouTube.

Other songs likely to be particularly entertaining at a live venue include “Mama Said”, “You're Not There” and “Drunk in The Morning”.

The Bangkok concert is the band’s first-time full-scale show within Asean. Tickets prices for “Singha Corporation Presents Lukas Graham Live in Bangkok 2019” are Bt2,500 and Bt2,000, with limited early-bird tickets available at Bt2,300 and Bt1,800 (on sale from August 30 to September 6).

Tickets will only go on e-Ticket sale via The Concert Application. The app can be downloaded through https://www.theconcert.co.th/n/64.