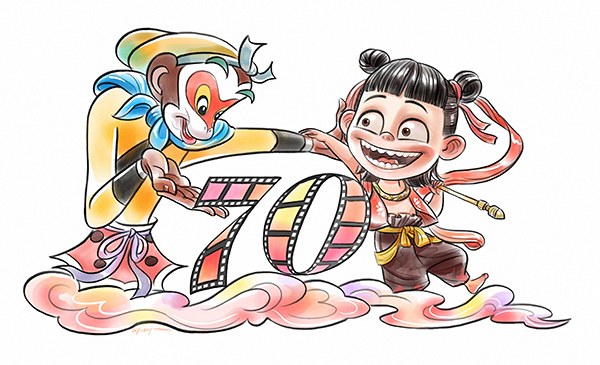 Snow White and the Seven Dwarfs, the world's first animation film, was released in 1937. Four years later, the Wan Brothers screened the first Chinese animation feature, Princess Iron Fan, a fictional character from the Chinese classic Journey to the West.

The pursuit of Chinese style of animation led to the creation of The Monkey King in 1964, a classic animation film well known both at home and abroad. The broad reach and mass appeal of Chinese animations can be gauged from the fact that even Osamu Tezuka, the godfather of manga (the Japanese term for impromptu pictures), was inspired by the works of the Wan Brothers such as Princess Iron Fan and The Monkey King. In fact, during reconstruction of postwar Japan, China's animation style offered a cultural reference to Japanese artists.

The biggest achievement of the generation represented by the Wan Brothers, Te Wei and Ma Kexuan, in the mid-20th century was the successful adoption of the basic Western rule of picture composition and using it to create Chinese-style animations. Especially, ink-wash animations such as Where is Mama (1960), The Cowboy's Flute (1963) and Feeling from Mountain and Water (1988) gave shape to the Chinese style of animation.

In other words, after decades of exploration, Chinese painting found motion on screen. Yet since Lotus Lantern reached the peak of Chinese animation style in 1999, Chinese animation films have rarely created waves at the international level.

Compared with the pioneers who successfully integrated traditional images with cinematic techniques, the later generation of Chinese animators simply applied new techniques to create animations without taking into consideration the contents. For example, since 3D graphic designs are not only about putting on layers of pictures using advanced technology, Chinese animators have to apply Chinese aesthetics and different modern techniques to create animations.

That's why the adaptation of classics using 3D techniques such as The Monkey King and The Magic Brush in recent years has met with some success but never achieved the past glory.

Since 2016, the Chinese government has taken measures to boost the country's animation industry which has seen a rapid increase in productions and consumer demand.

The introduction of the development plan for China's animation industry in the 12th Five-Year Plan (2011-15) lifted the industry to the central strategic level from 2012. It has since seen about 30 percent annual growth and is worth 100 billion yuan ($14.05 billion) today. A series of animations have been created during this period with some excellent examples being the Pleasant Goat and Big Big Wolf, Boonie Bears, Kuiba and The Legend of Qin.

However, the application of Hollywood and Japanese techniques and values to Chinese animation features has not only failed to increase box office returns but also compromised the Chinese characteristics.

Luckily, China's animation industry has learned a lesson from its failures and is trying to change its approach. Ne Zha, for example, has become the top-grossing film next only to Wolf Warrior 2.

The reason why Ne Zha has been welcomed by Chinese audiences is that it has applied a range of traditional aesthetic elements, from Taoist, Peking Opera and Lunar New Year paintings to Chinese animation techniques. Actually, China's animation movies are finding the right rhythm, achieving box office returns of about 60 billion yuan in the country.

But despite Ne Zha breaking several box office records, China's animation industry still faces many challenges. Ne Zha achieved almost unprecedented success because of the cooperation of more than 70 enterprises, indicating how decentralized China's animation industry is. It also shows why the producers of The Monkey King: A Hero's Return and Big Fish& Begonia have not been able to make sequels or new animation films despite the relatively easy access to capital, and have sought foreign enterprises' help to make new animation movies.

The author is a researcher at the Chinese National Academy of Arts. The views don't necessarily represent those of China Daily.