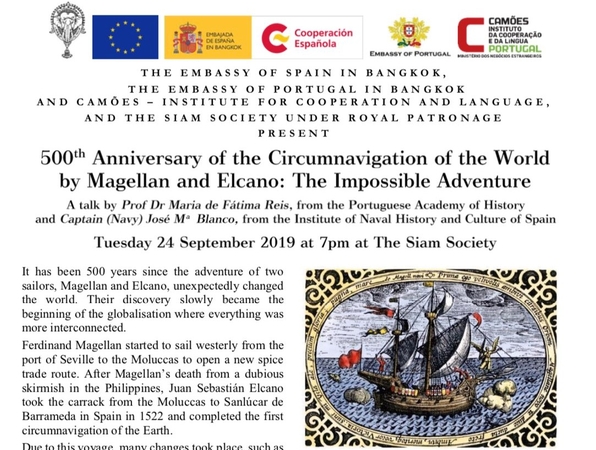 Five hundred years ago, two sailors -- Ferdinand Magellan and Juan Sebastián Elcano -- embarked on a historic voyage, sailing from Seville in Spain and crossing the Atlantic, Pacific and Indian oceans.

To celebrate the 500th anniversary of the circumnavigation, the embassies of Spain and Portugal in Bangkok, Camoes – Institute for Cooperation and Language, together with The Siam Society Under Royal Patronage and with the support of the European Union Delegation in Bangkok, will organise a special talk.

Two specialists from both countries -- Prof Dr Maria de Fatima Reis, from the Portuguese Academy of History, and Captain (Navy) Jose Maria Blanco from the Institute of Naval History and Culture of Spain -- will speak on the “500th Anniversary of the Circumnavigation of the World by Magellan" and "Elcano: The Impossible Adventure”, on September 24 at 7pm at The Siam Society.

It has been 500 years since the adventure of Magellan and Elcano unexpectedly changed the world. Their discovery slowly became the beginning of the globalisation where everything was more interconnected.

Ferdinand Magellan started to sail westerly from the port of Seville to the Moluccas to open a new spice trade route. After Magellan’s death from a dubious skirmish in the Philippines, Juan Sebastian Elcano took the carrack from the Moluccas to Sanlucar de Barrameda in Spain in 1522 and completed the first circumnavigation of the Earth. Due to this voyage, many changes took place such as the rejection of the flat-earth theory, advances in science, commerce and communication and a renewed flow of people, plants and animals.

Captain Jose Maria Blanco, Captain of the Spanish Navy, is a historian who has published many books on the Spanish fleet, including La Diversion de Tolon, La Armada Espanola en la Primera Mitad del Siglo XVIII, and La Armada Espanola en la Segunda Mitad del Siglo XVIII, as well as a correspondent for the Real Academia de la Historia and a frequent collaborator of the Revista General de Marina. He was a professor at the Higher Centre for National Defence Studies.