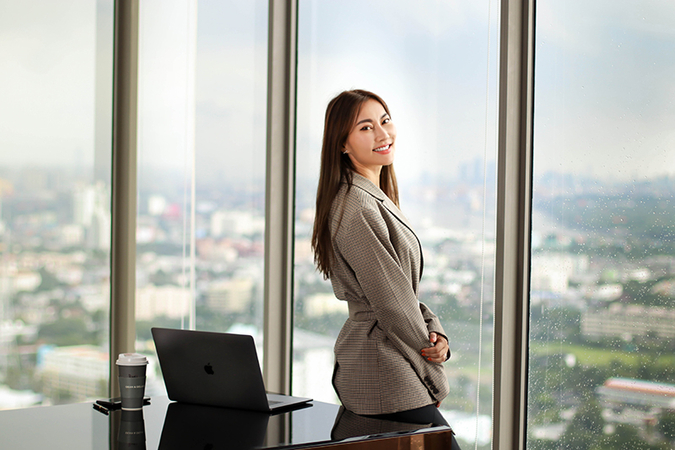 Stasha Dansithiteshodom is an artist-turned-businesswoman who has found her true passion in life.

Thidasiri “App” Danvadhanakul, a former Grammy artist who shot to fame with her first single “Kham Saraphap Khong Nak Suksa Fuek Ngarn” released as part of the label’s modern lukkrung” (MLK) project back in 2004, is today enjoying even more success, this time as the organiser of creative pool parties.

In business for 7 years, her company, Mad Stash Co Ltd, has its roots in her new name, Stasha Dansithiteshodom.

The word Stasha means resurrection and according to those who know about such things, people with this name tend to be very active and love to try new things and take chances. Professionally, they can be successful as a public figure, in the media, or at developing new ideas for businesses.

“It’s rather like being reborn,” Stasha says with a smile. “I found my lucky numbers through my name and it was approved by a well-known monk. Lucky numbers have reinforced my power. I also changed my family name and was pleasantly surprised when my parents said they liked it. That gave me confidence in myself and the new name has made me a lot stronger. I’m even invited to sing at several events every week.”

After leaving GMM Grammy, Stasha worked for a while as a coordinator for Sensation Thailand by Heineken, which was organised for the first time at Impact Arena in 2012, and later for a company that brought American media personality and fashion icon Paris Hilton to Thailand.

“The jobs were fun but I kept asking myself if I wouldn’t be better going it alone. And so I set my own company and team, and called it Mad Stash,” says the singer-turned-businesswoman.

Mad Stash Co Ltd was set up in 2013 as an organiser of new stylish fashion & music events for Bangkok’s entertainment business and to produce and manage professional international fashion models and DJs, both well-known and not so well-known, to perform Mad Stash-style.

“The first proposal I wrote was submitted to Sofitel So Bangkok and offered a stylish pool party that perfectly matched the hotel’s concept. In the beginning, the entrance fee to the party was Bt250 but now it has gone up to Bt600 because there are many more people interested in the parties but the hotel can’t support all of them.

"It’s an event that everyone can enjoy during the day – listening to music, dancing and chatting with friends from 1pm to 9pm. During the Songkran Festival, the pool party was packed with more than 1,500 people. We have created new themes for the pool parties and sometimes we invite an international DJ from Ultra Records. In addition to So Pool Party, we also organise the Westin Pool Party and Splash Pool Party,” says Stasha. “Mad Stash puts together rooftop events for the Marriott and Avani and also provides digital marketing – promoting the events through our social medial channels and our influencers and celebrities.”

More recently, Stasha formed another company, Innotra Co Ltd, which serves as the parent company of two brands – MadBike for motorbike rental and Scoota for electric scooter for rent. Scoota gets you wherever you need to go – whether you’re commuting to work, going to class, running errands or exploring the city. The electric scooter is fun, easy to ride and completely emission-free.

“The German ambassador to Thailand rides our electric scooter as part of his personal commitment to reducing greenhouse gases. We expect to have more than 500 stations for electric scooter rental at several hotels, restaurants and cafes around the country. Users can drop the electric scooter at another station. We just launched the application and Scoota won an award for the Global Expansion Track of the Dtac Accelerate Batch,” says Stasha proudly. “For MadBike, most of renters for motorcycle are expats and foreign tourists as well as some foreign CEOs.”

And Stasha says music is no longer her sole love. She’s passionate about her business too.

“If we are not passionate about what we do, we’ll never achieve success. The greatest goal is the pursuit of happiness – we are happy with what we manage and committed to making people happy,” she says.