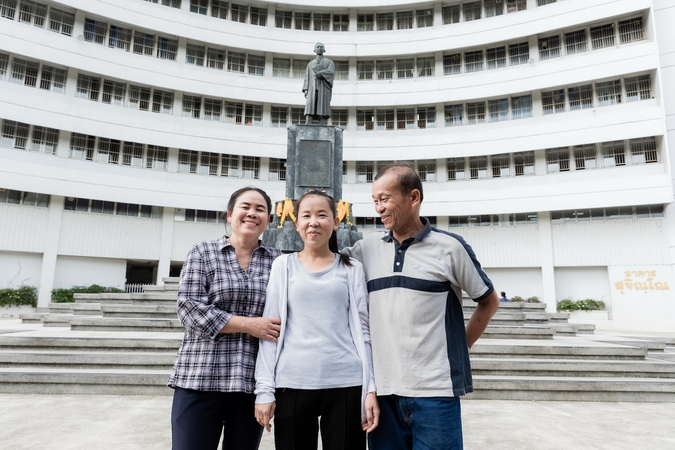 Wanitcha Kaewya, centre, and her parents. Wanitchaya is a patient of Gaucher Disease - the rare condition and affect one in 100,000 people.

When Wanitcha Kaewya was about a year old, her mum felt something was wrong – the little girl had an irregularly large abdomen, she cried often and rarely ate or even learned to speak.

When the child appeared to have aching bones and trouble breathing, her parents took her to the doctor, who found that Wanitcha’s spleen was unusually large and removed it. For nearly 20 years, doctors had been treating Wanitcha for symptoms, because they had no idea what she was suffering from. It was not until Wanitcha turned 20 that a doctor at Maharaj Nakorn Chiang Mai Hospital eventually found that she was suffering from Gaucher Disease.

Gaucher is a rare condition and affects one in 100,000 people. It is estimated that some 600 people are suffering from this condition in Thailand, but so far, only 30 have been diagnosed and only 20 are being treated under state-provided healthcare benefits.

These figures do not just portray the challenges faced by the public health system in Thailand, but also illustrate the need for research and awareness of the disease among both the medical community and the general public.

An inherited disease, Gaucher is created by the mutation of the gene that is responsible for creating the glucocerebrosidase enzyme that the body needs to break down a particular kind of fat called glucocerebroside.

The early signs of this disease can be very alarming as the body starts getting disfigured due to a deficiency of this enzyme, as the body becomes incapable of eliminating certain fatty substances in the cells, causing an accumulation of the fat, which then disfigures the organs.

The first organs to be enlarged are the liver and spleen, before the patient starts showing signs of blood abnormalities. Affected people can develop anaemia, get easily bruised or start bleeding due to a low level of platelets. Some patients may also develop bone abnormalities, like pain, thinning or fractures. The condition can also cause slow development in certain patients. Gaucher Disease Type 2 and Type 3 present neurological disorders such as a slowdown in intellectual development and seizures.

In 2013, LSD Thailand Foundation notified Wanitcha’s mum that the disease can be treated via enzyme replacement therapy, and that it was included in the National List of Essential Medicines. The mother was finally able to see her daughter get better and happier.

Nevertheless, the family is still concerned about the expenses, because they have to travel almost 100 kilometres every two weeks for the treatment. They wish the government would also provide financial aid to cover all expenses related to the treatment.

Wanitcha is now 30, living a normal life, and is offering to advise anyone else fighting this rare disease. Assoc Professor Adisak Tantiworawit, MD, a haematologist at Maharaj Nakorn Chiang Mai Hospital, affiliated to the Faculty of Medicine, Chiang Mai University, said: “The most important characteristic of Gaucher disease and other rare diseases is that they are rarely found. This is why most people, including healthcare personnel, are not aware of rare diseases, as we rarely experience them and the chance of anyone developing these diseases is very slim. The public also lacks an understanding of rare diseases. Also, there are very few specialists in Thailand, making it hard to properly diagnose and treat them. Moreover, there are only about 15 haematologists and geneticists in Thailand who are capable of diagnosing and treating Gaucher disease.

“Every October 1 is International Gaucher Day, and I want to raise awareness of the disease as it is rare and very few physicians understand the symptoms well enough to make an accurate diagnosis. Reports from other countries indicate that on average patients with Gaucher disease spend 10 years seeing seven different doctors before they finally meet one who can correctly diagnose their disease. The symptoms of Gaucher disease may appear at any age, though symptoms in adults are not as outstanding as in children. Also, different patients do not necessarily have the same symptoms. Moreover, the symptoms are usually similar to those of other haematological disorders such as thalassemia, leukaemia and lymphoma, which are so much more common than Gaucher. Therefore, Gaucher disease can be easily misdiagnosed,” Dr Adisak added.

In Thailand, there are 30 confirmed Gaucher Disease patients, 90 per cent of whom are children with most of them affected by Gaucher Type 3, which is characterised by brain complications. The incidence in Thailand is worth studying as it is contrary to the occurrence in other countries where more adults are affected than children. In addition, 90 per cent of patients in other countries have Gaucher Type 1, which does not affect the brain.

Dr Adisak said Maharaj Nakorn Chiang Mai Hospital has established a specific guideline called High-Risk Screening Project to screen patients and to provide them with quick diagnosis when they come to see a haematologist. Under this scheme, when doctors find patients displaying physical signs of Gaucher disease or whose lab results suggest they have the condition, such as an abnormally enlarged spleen or low levels of either red or white-blood cells, or particularly low levels of platelets, they will be tested for Gaucher Disease.

“Initially, we will draw blood from the fingertip of suspected patients. If test results point to Gaucher disease, the patients will have to undergo a test for genetic mutation to determine if they are actually affected by the disease. Confirmed patients will then register for treatment to be funded by the National Health Security Office under the Public Health Ministry. The patient will have to undergo enzyme replacement therapy every two weeks for the rest of their life. The other option is bone-marrow transplant, but this method is costly and there are many limitations at present.”

The Public Health Ministry recently introduced guidelines for the care for patients suffering rare disease under the National Health Security System. A task force to develop a caring system for patients with rare diseases will also be established to ensure fair access to treatment.

“Rare diseases are difficult to manage. The number of affected people is small while specialists on those diseases and service centres are also limited. There is an issue of inaccessibility to treatment and medication. Due to these factors, a proposal for the development of a concrete system for rare diseases treatment has been prepared,” Dr Adisak added.