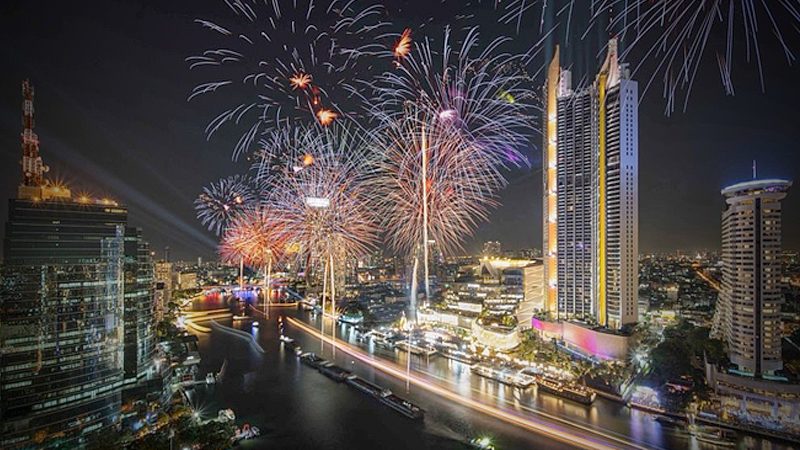 The Tourism Authority of Thailand (TAT) has teamed up with public and private partners, as well as communities along the Chao Phraya River for "Amazing Thailand Countdown 2020", promised to be the grandest and most spectacular event in welcoming in the New Year.

Designed under the concept "Seven Wonders of Blessings" and taking place on December 31 at River Park, ICONSIAM, on the banks of the historical Chao Phraya River, the event celebrates New Year's Eve and welcomes the beginning of another year.

TAT governor Yuthasak Supasorn said:" It is one of the biggest events marking the end of the year and one which TAT organises every year in various destinations in Thailand to promote the travel industry, boost the economy and generate income during the festive period as a gift to the Thai people".

This year TAT is hosting the celebrations in Bangkok and six other provinces: Ratchaburi, Chiang Rai, Phatthalung, Kalasin, Sa Kaeo, and Lopburi.

In Bangkok, TAT will collaborate with ICONSIAM as well as partners along both sides of the Chao Phraya River for the world-class celebration "Amazing Thailand Countdown 2020" on December 31 at River Park, ICONSIAM.

Supoj Chaiwatsirikul, Managing Director of ICONSIAM Company Limited, said the countdown event is part of ICONSIAM's mission to make the historical Chao Phraya River known all over the world.

"To present the Chao Phraya river as a leading destination and a famous national landmark for the countdown to 2020, we are proud to be involved in the organisation of "Amazing Thailand Countdown 2019" with TAT and other partners under the concept 'Seven Wonders of Blessings' on December 31 at River Park, ICONSIAM.

"There will be dazzling lights along the river. To bring happiness to Thais and foreign tourists, we have lined up truly magnificent art and cultural performances. The highlight will be a fireworks show of Thai sticky rice – an sustainable and eco-friendly innovation from Japan. It will be set up along the river over 1,400 metres in length and expects more than one million viewers within 2 kilometers of the venue.

The magnificent fireworks are broken down into seven acts on the concept of "Seven Wonders of Blessings", all illustrating the rich heritage of Thai history, the kingdom's prosperity, the nation, religion, monarchy, and the agricultural abundance due to the expanse of water, as well as paying respect to the royal institution that has overseen the happiness of the people for a long time. All Seven Acts have auspicious meanings.

1st – The Glory: begins with golden showers of fireworks representing the glorious victory over the land and water and telling the world that this is the golden land blessed by the reigns of Thai Kings until the present time.

2nd – Health Giving: wishes the King a long life. The fireworks blast up into the sky and expand like a big tree spreading out its branches. This represents the loving kindness of His Majesty the King towards Thai people.

3rd – Way up High: points to the moral glorification of the religion. The fireworks that light up the sky can be compared to the enlightenment that leads the way to a peaceful life.

4th – Joy to the World: felicity and peace. Colourful fireworks in thin and big lines spread through the sky with joy of happiness, representing the contentment of people at leading a happy life in this peaceful land.

5th – Diamond in the Sky: wealth and the national resource called Suvarnabhumi – the land of abundance. The fireworks are like diamond flashes that scatter over the sky, resembling seeds that have been spread and will soon grow.

6th - Lucky Star: fortune and harmony. Small and large fireworks in various colours light up the sky on the New Year's Eve and welcome the New Year as if bringing an auspicious blessing to the Thai people as well as their everlasting happiness.

7th – Power of Love: divinity to protect the country. The red fireworks represent the power of love, care, and protection that will prevent the water from allowing evil to step on land.

Public and private organisations, including the Marine Department and the Chao Phraya Express Boat Ltd, will provide services, various modes of transport and other facilities for visitors.

The area along Chao Phraya river will be filled with beautiful decorative lights throughout the festive New Year's Eve and New Year celebration.