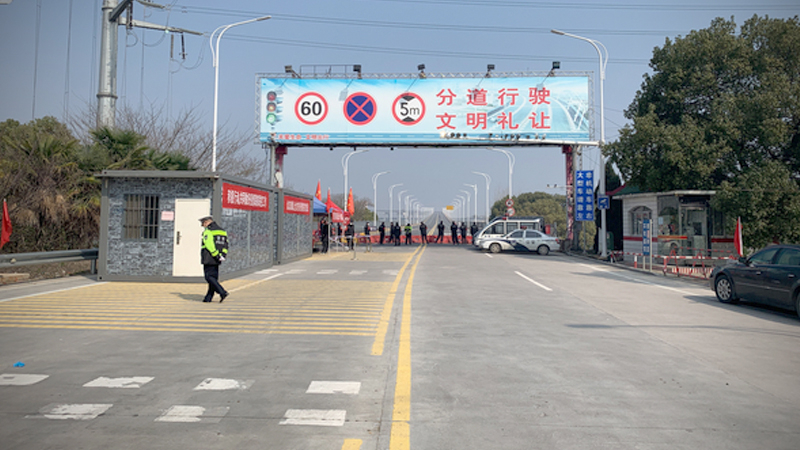 Police guard a barricaded bridge from virus-stricken Hubei Province, which is under quarantine. A loudspeaker warns Hubei residents and vehicles that they may not enter. MUST CREDIT: Washington Post photo by Gerry Shih

JIUJIANG, China - One hand clutching her furry bunny purse and another propping up her disabled grandmother, Shi Zhiyu hobbled down the empty highway on a one-way journey across the Yangtze River.

"You won't be able to come back," a police officer warned at the last checkpoint before the bridge rose then disappeared toward Hubei - the locked-down heart of the coronavirus outbreak. 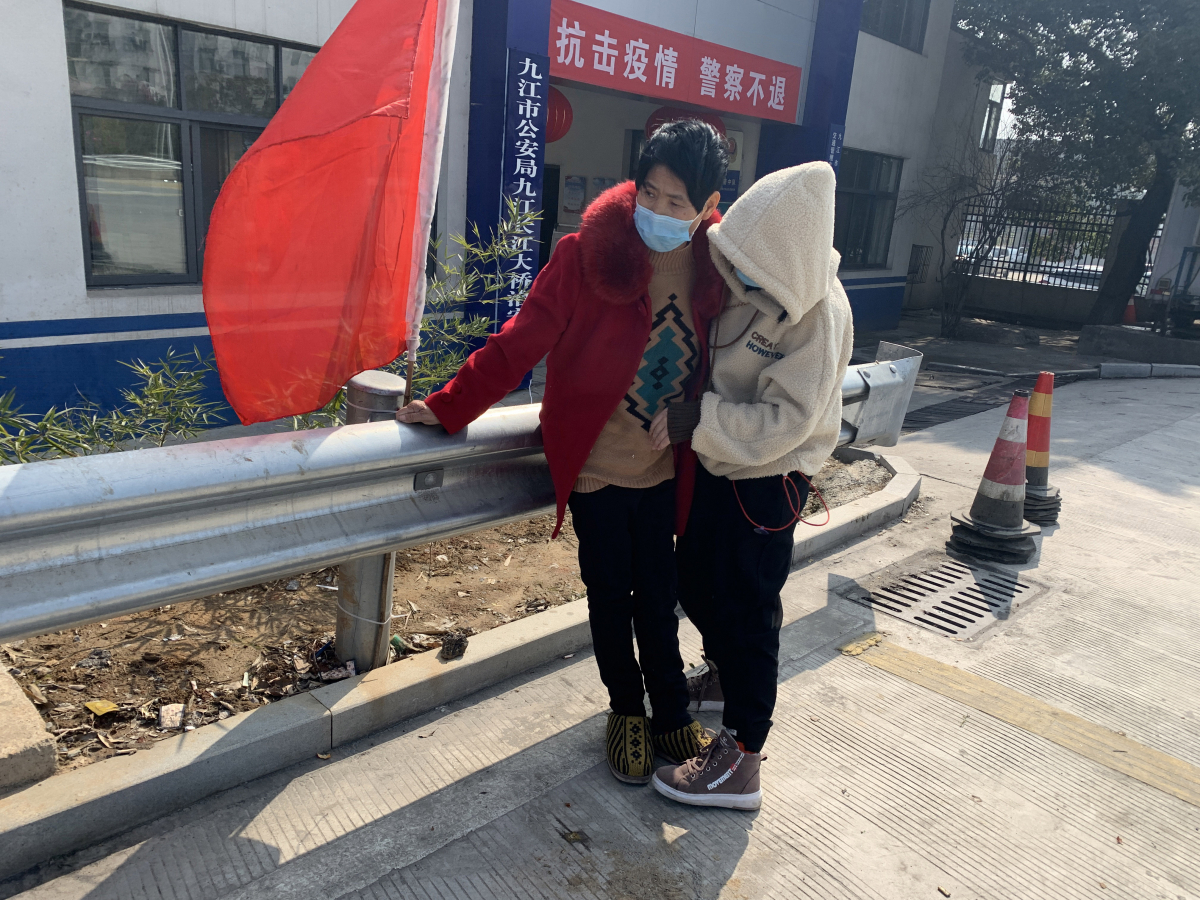 Since Jan. 24, a once-busy bridge connecting eastern Hubei to Jiujiang in Jiangxi province - and the outside world - has been shut as part of an unprecedented Chinese effort to contain the epidemic. Eighteen police officers guard the bridge on each shift, while a loudspeaker warns that "Hubei residents and vehicles are prohibited" from entry.

For a lucky few who have the right documents and appear healthy, the bridge is in fact a rare escape hatch. For Hubei residents locked on the outside and trying to get home, such as Shi and her grandmother, it's a passage into a surreal confinement that will last weeks, if not months.

For the country, the bridge symbolizes the sudden isolation imposed over Hubei, a swath of China's densely interconnected heartland that is now physically cut off.

As the epidemic radiated in recent weeks out from Hubei's capital, Wuhan, the Chinese have turned against those who hail from the province - a domestic microcosm of the stigma that their compatriots now face internationally.

Hotels reject travelers with a Hubei identification card. Nervous workers screening passengers emerging from trains routinely ask whether they traveled from Hubei. Those from Hubei found in other parts of China are tracked down, accosted and sequestered at home by neighbors. When a man tried to escape Hubei by floating down the Yangtze River on a wooden raft last week, he was "educated" then turned back, Jiujiang police said.

Those who are found to "willfully" spread the disease by flouting quarantine rules could be punished by death, national authorities have warned. On social media, Chinese people have condemned the 5 million so-called "public enemies" - Wuhan residents who fled the city in the days before and immediately after the government's lockdown order.

Here in Jiujiang, a lush corner of Jiangxi province 140 miles down the Yangtze from Wuhan, residents say proximity to the crisis has meant disease and paranoia, disrupted lives and commerce. But for a region historically bound to Hubei by trade, culture and blood, it's also more complicated than that.

The bridge suddenly closed in January while Shi, who lives on the Hubei side of the river, was visiting her grandmother Ying Quanlong, who was hospitalized on the Jiangxi side after suffering a stroke.

"We come here all the time for movies and shopping. It's a 20-minute bus ride," said Shi, 15, as she set Ying on a wool blanket and waited for police approval for her father to drive an SUV across the empty bridge to pick her up. "Now, it's another world."

Hauling her luggage the other direction toward Jiujiang was a saleswoman surnamed Gui, who got up at 8 a.m. for a long taxi ride, then a 90-minute hike over the bridge. Like a trickle of other pedestrians, Gui was one of the few allowed to pass the police barricade and leave Hubei because she showed proof that she purchased train tickets onward to Shenzhen well before the quarantine announcement - and she had passed a temperature test for fever.

"I don't blame" the quarantine, Gui said, laughing and seemingly relieved at her escape. "The country has to do what it has to do."

Less than a quarter-mile away, in an alley off a deserted commercial drag, shopkeeper Zhang Hubin was less pleased about his city's neighbors.

"It's not right to be prejudiced, but when I hear a customer with a Wuhan accent, I get nervous," said Zhang, who has seen his business grind to a halt as Jiujiang authorities ordered shops near the Hubei border closed and residents voluntarily stay indoors.

City officials have reported more than 87 coronavirus cases. Two Jiujiang hospitals last week posted requests on social media for donated masks and protective suits. The hospital seemed calm and sparsely populated on a recent afternoon, but two nurses confirmed that there was still a shortage of supplies.

Fear has spread beyond the immediate provincial border. On a country road outside Jiujiang, a red government banner proclaims: "Don't run around if you just came back from Wuhan - it's all over if you spread the disease." Another reads: "You go running door-to-door? Death will show up at your door!"

In the foothills of the steep Mount Lu, a half-dozen thickset men loitered around a roadblock they constructed out of bamboo poles.

They were volunteers assigned by local officials to keep visitors - and the risk of infection - out of Shimendong Village. Other men were tasked with keeping fellow villagers inside, explained a volunteer surnamed Hu: many families in the village had migrant workers returning home from Hubei before the Lunar New Year holiday. They needed to be cautious.

"The village committee went door to door accounting for everyone who came back from Hubei," Hu said. "We have them all isolated at home and under surveillance. Thankfully, no one is sick."

He added: "This should be understandable."

Those from Hubei have aired their despair about the fear and loathing they face. A woman told the Chinese newspaper Time Weekly that her housemates locked her out of her Beijing apartment. In the northern city of Shijiazhuang, neighborhood committees offered bounties of $280 to anyone who reported someone who had visited Wuhan. An apartment block in Shenzhen cut off water to force tenants from Hubei to register after returning to the southern city.

In Jiangxi's provincial capital, Nanchang, hotels asked guests to answer surveys asking whether they had traveled to Hubei. A receptionist at a major international chain assured a visitor that there were no guests from Hubei in the building. "We've rejected them all," he said.

Some officials, including the Communist Party chief of Wuhan, have taken notice and urged Chinese people not to treat their compatriots with scorn. The People's Daily, the party's official mouthpiece, instructed citizens to "not hold prejudice or treat cold-heartedly" people from Wuhan.

"They wish more than anyone to eliminate the epidemic," the paper wrote. "They want safety, assurance and care."

On an abandoned boulevard in Jiujiang, Tian Hongfa, a 62-year-old flower arranger, said he depended for years on a flow of tourists and flower purveyors from Hubei to sustain his business. He feared that Hubei's isolation would plunge his city and much of central China into prolonged misery.

"We had already been having five years of slowing economy - and now this disease," Tian said. "It'll be a long time before we can lift our heads out of this."

Jiangxi's destiny is tied to Hubei, in the past and the present, Tian said. Like the ancestors of many in these parts, Tian's father fled the Japanese invasion of Wuhan in the 1930s with two sacks of his belongings strapped to a bamboo pole across his shoulder and settled in Jiujiang, he said.

"I say we should have sympathy for those in Hubei," Tian said. "We're one family, of the river."