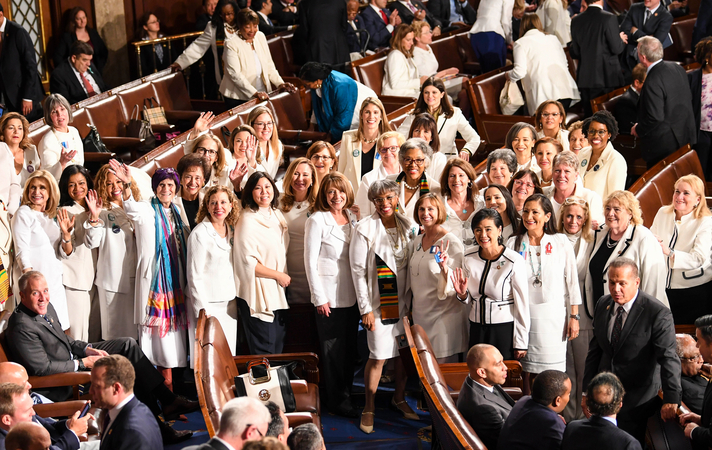 Female lawmakers wear white in a nod to the suffragette movement before the State of the Union address Tuesday, Feb. 4, 2020. MUST CREDIT: Washington Post photo by Toni L. Sandys

The Democrats came into the House chambers jovially. They greeted each other warmly and posed for group pictures before the State of the Union address. They laughed. Civility was evident.

But they were angry. And by the end of President Donald Trump's speech, that conviviality, that decorum had been shredded. 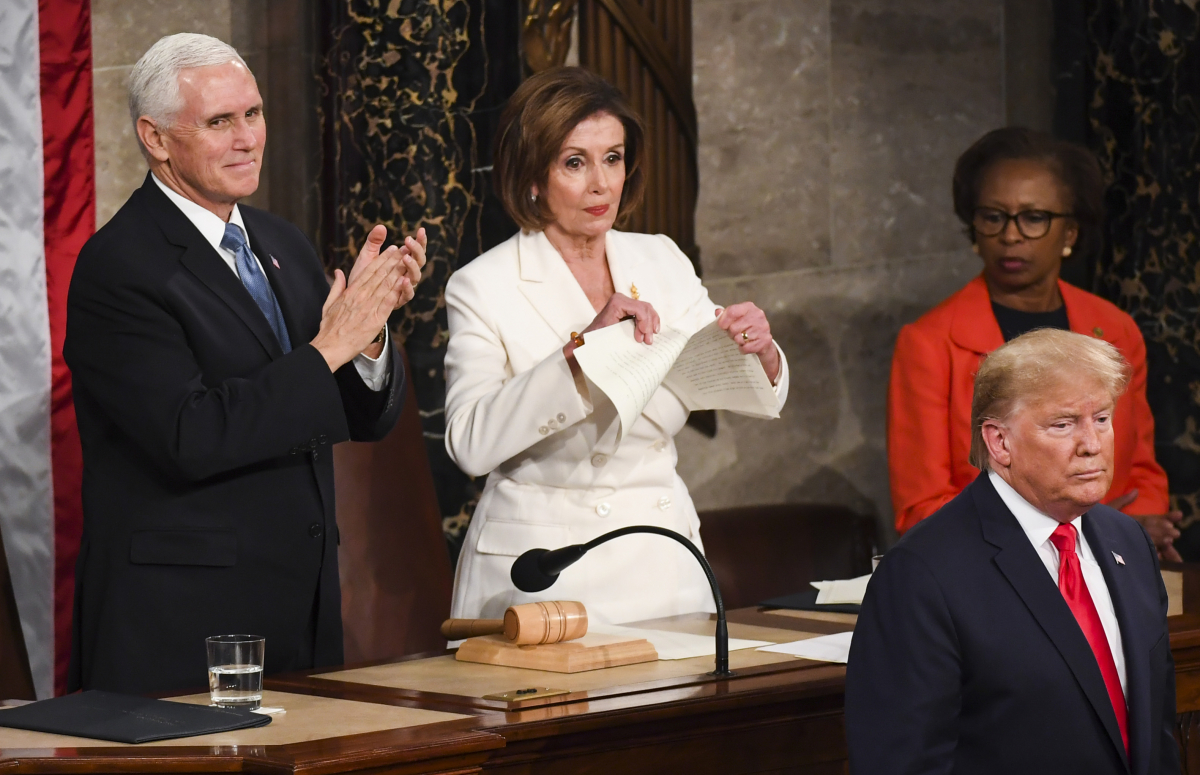 Maybe they didn't "hate" anyone, as House Speaker Nancy Pelosi, D-Calif., has said she does not. But boy oh boy. When Trump arrived to deliver his State of the Union address, the smiles faded. The faces went blank. Democrats glared. They smirked. They waved their hands in dismay.

Trump made his entrance wearing a dark suit and fire-engine-red tie. He fiddled with his jacket. He thrust his chin forward. His swirl of hair was mussed at the sides, as if he'd tried to smooth it down without the benefit of a mirror. He rode in on a cloud of self-satisfaction.

When he reached the lectern, he greeted the speaker, along with Vice President Mike Pence, by handing them advance copies of his speech. He did not shake Pelosi's hand, which she had extended. She did not seem to care.

The women of the House Democratic caucus had pulled out their white suits for the speech. It's never good for Trump when they pull out the suffrage white and move en masse like some righteous regiment of lady warriors. The clothing choice was ostensibly to mark the 100th anniversary of the passage of the 19th Amendment, which gave white women the right to vote. But the color was also emblematic of a white hot fury that is roiling the Democratic Party.

Pelosi had been wearing violet earlier in the day. A patriotic flag brooch had been pinned to her lapel. By evening, she, too, was in white. The flag was replaced by her Mace of the Republic pin, a symbol of the power of Congress. Of endurance. This president has been impeached. He is unbowed. But she remains a believer in this union, of checks and balances, despite the current state.

The Democratic fury was writ large. The president was barely five minutes into his speech and Rep. James Clyburn, D-S.C., was already shaking his head with his face furrowed into an expression that was one part disgust and one part sorrow. Pelosi's lips were already pursed; she would soon throw her hands up in exasperation. Rep. Debbie Dingell, D-Mich., whose grief after the death of her husband former congressman John Dingell, D-Mich., had been mocked by the president, had her reading glasses perched atop her head. Her face was without affect and she was slowly and methodically blinking as if to keep daggers from jutting from her eyes.

And, of course, the Republicans in the chamber, along with Sen. Kyrsten Sinema, D-Ariz., were bounding from their seats with thunderous applause like an exclamation point on the end of every sentence.

As always, the party differences are obvious with a single sweep of the television cameras across the chambers. There's the president's Cabinet - so many well-heeled, white men in dark suits. There are the Democrats - a klatch of women in white, black legislators in African stoles, Rep. Ilhan Omar, D-Minn., with her colorful headwrap swirling high. Our political polarization is made plain in hair styles, bolts of fabric and the Pantone color chart.

Some members of Congress were so furious that they decided to boycott the speech. For some this was nothing new, they've been in a state of low simmering anger ever since Trump was elected. Rep. Alexandria Ocasio-Cortez, D-N.Y., tweeted that she would not attend because she was fed up: "I will not use my presence at a state ceremony to normalize Trump's lawless conduct & subversion of the Constitution. None of this is normal, and I will not legitimize it."

Her colleague Rep. Ayanna Pressley, D-Mass., skipped the speech, too. She also posted the announcement on Twitter, along with a portrait of herself standing with her arms crossed with the Capitol in the background. Gone was the wig that she has been wearing in public to hide her alopecia. She was confidently herself and making it clear that the personal is political and that in this moment politics threatens the well-being of many persons of color, many women, many immigrants, many, many, many.

Rep. Tim Ryan, D-Ohio, tweeted that he walked out of the address at about the halfway mark. "I've had enough," he wrote. "It's like watching professional wrestling. It's all fake." Actually, it was a bit like watching a game show with various members of the audience suddenly finding themselves the recipient of a grand prize. It was in-your-face television: A little black girl gets a scholarship to go to any school she chooses and stares up in shock and confusion. A uniformed soldier, home from a deployment overseas, walks into the first lady's row to the surprise of his family. A gray-haired Rush Limbaugh, who recently announced that he has lung cancer, receives the Presidential Medal of Freedom right then and there. Melania Trump drapes the honor around his neck and he covers his face in gratitude.

There was no need to flash an applause sign. The audience's role was clear.

The president finished his address. He took a moment to bask in the approval from his monochrome supporters. His critics' gaze bore into him. The speaker stood - her pristine suit aglow, her mace brooch shining. White hot fury. She bit into her lower lip; she neatly organized her copy of the president's speech. And then she ripped it up.