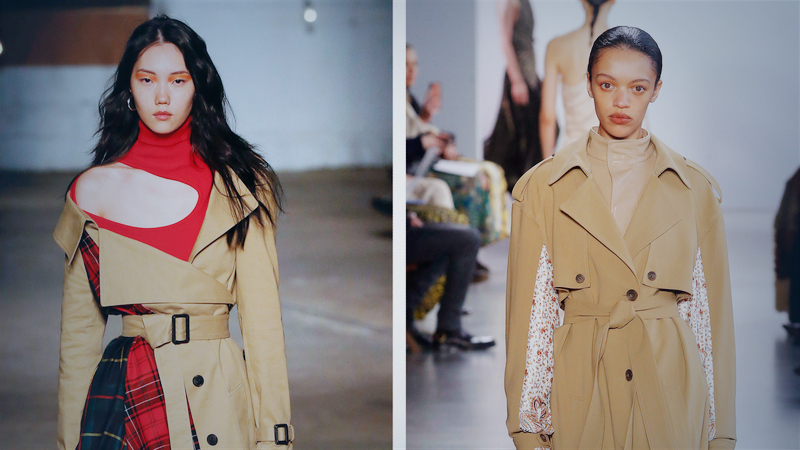 NEW YORK - The classic trench coat is being ripped apart, chopped in half, blown up - and then put back together. Don't try this at home.

On Monday at Fashion Week, designer Jonathan Simkhai, who founded his self-named brand in 2010, showed a collection in which he cut away the backs of trench coats and inserted yards of flowing brightly patterned fabric, juxtaposing the angular tailoring of the jacket, which has its roots in menswear, with the fluidity of a dress.

At Monse last week, the designers Fernando Garcia and Laura Kim used trenches in their exploration of punk, splicing their hacked-up bits with swaths of nubby plaid and holding it all together with giant safety pins. It was a gentle form of subversiveness - nothing too jarring. All of the shapes and ideas were recognizable; they were just conjoined in unique ways.

And a newcomer, Wei Ge, used the trench coat as a way of exploring gender traditions and blurring the lines that still separate them. The formal debut of his brand KEH, in a gallery space in Chelsea, showed his skillful execution of roomy tailoring, his quiet use of color and a well-edited point of view. The graduate of Parsons had a theme that was clear and succinct: menswear with just enough sensuality and experimentation to excite the senses. 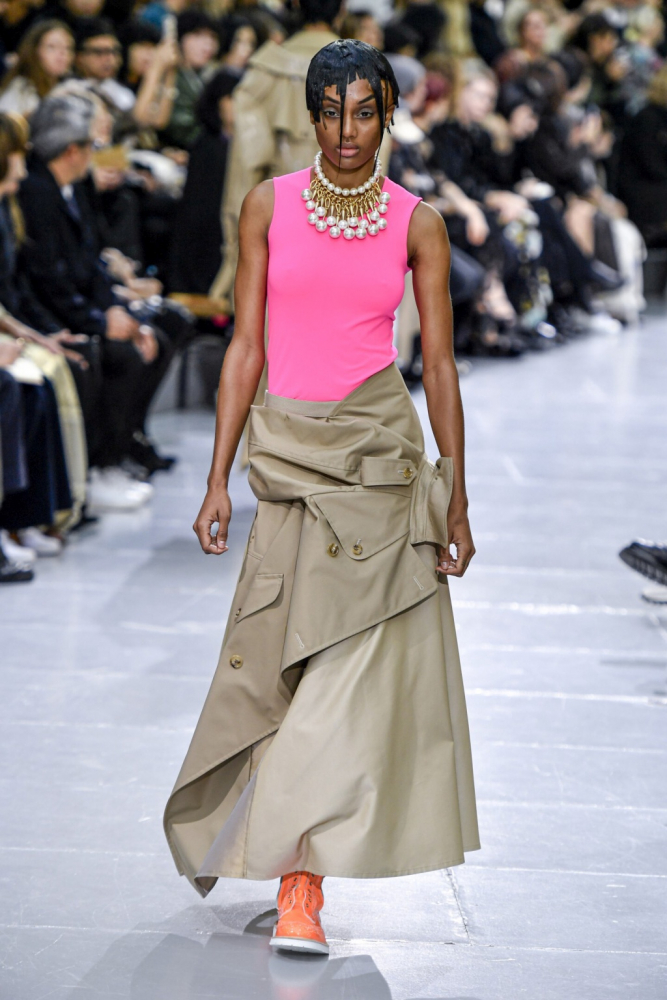 All this attention on the trench coat is not so much a trend as a newfound obsession. A trend would suggest that a look - or a technique - is brand new or at least that it has not been seen for a good long time. Japanese designer Chitose Abe has spent years separating basics into their various pieces and then splicing those elements back together with bits of contrasting fabrics stitched in. The trench coat is a favorite foil.

Designer Kunihiko Morinaga explored proportions of various classic garments - including blazers, crew neck sweaters and trench coats - in his spring 2020 collection for Anrealage. And most notably, Junya Watanabe dedicated his entire spring 2020 collection to the khaki-colored coat. He turned it into skirts and dresses. Its various elements - the lapels, epaulets, belt - were misplaced and reworked. And as filtered through Watanabe's imagination, the trench coat became the equivalent of a singular melody that was transformed into an endless stream of remixes.

The classic coat's history dates to World War I - and really even beyond that once you start parsing exactly what counts as a trench. It's a reflection of tradition, technical ingenuity, patriotism and classism. Thomas Burberry is typically given credit for creating the modern version of the style thanks to his creation of gabardine, a fabric that was water repellent and that allowed the fabric to breathe so that wearers weren't left roasting in their own sweat.

The style exists in countless iterations in a host of brands, but it's also an irresistible point of experimentation. It's a recognizable symbol of the Establishment, a key element in the masculine vocabulary and a paean to practicality. To reinvent it, is not just a bit of fashion slight-of-hand - it's a stress test of cultural traditions. Designers can't resist.