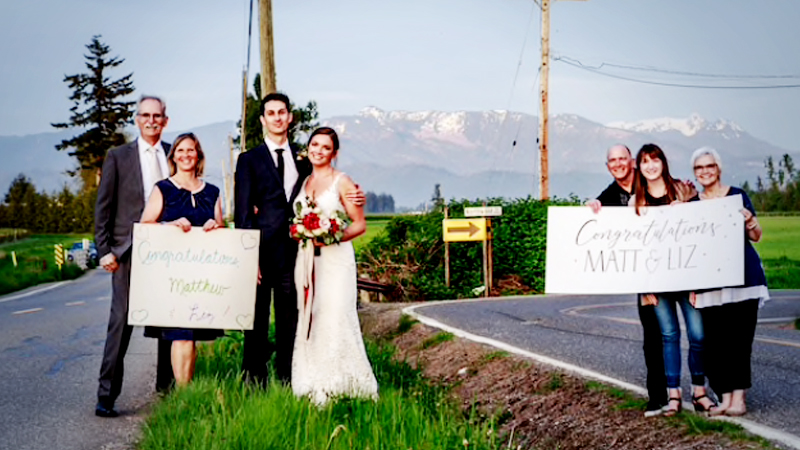 By Special to The Washington Post · Sydney Page · FEATURES

Nick Smith and Leah Bosello were desperate to see each other.

Ever since the border between the United States and Canada closed to nonessential travel in mid-March because of the novel coronavirus, cross-border couples like them were blocked from being together.

So the pair found a workaround: They started meeting at a ditch just off 0 Avenue, a heavily patrolled road in British Columbia that divides the two countries.

They would talk from several feet apart - Smith, 27, firmly planted on the U.S. side in Washington state and Bosello, 31, on the Canadian side. Border officers eavesdropped, and trucks sped by, drowning out their already muffled conversations, they said.

Other couples and families started showing up at the 0 Avenue ditch, too. For months, it was a strange and dusty meetup spot where couples would go to see each other and would often notice others doing the same.

Meeting this way was painful, Bosello said, "but it was still better than nothing."

As the weather warmed and shutdowns lifted, a superior reunion spot emerged in mid-May: Peace Arch Park. There, cross-national couples and families could actually embrace - at long last.

The recently reopened park is situated between Blaine, Wash., and Surrey, B.C.

"When I finally hugged him again, it felt like it was the first time I ever did," Bosello said.

In fact, the couple, who has been together for five years, was so ecstatic to reunite, they took a huge relationship leap. On June 6, they gathered a small group of family and friends and got married.

"Being separated made us realize what's truly important to us," Smith said. "The circumstances we found ourselves in really highlighted that we wanted to make it official."

The couple ordered silicone rings online to use as temporary wedding bands, and Bosello wore a navy dress she had ordered for a friend's wedding - paired with sneakers.

"It was all very casual and improvised," Bosello said. "But it was such a wonderful day, and so nice to just turn off everything else going on in the world."

The couple, who meet at the park daily, is hoping their marriage will speed up the process of Smith becoming a permanent Canadian resident, for which he submitted an application nearly two years ago.

Smith is originally from Beltsville, Md., and was serving in the military in South Korea when he met Bosello, who was temporarily working abroad as a teacher.

Bosello moved home to Canada three weeks after the couple hit it off at a bar in Seoul, and they've been in a long-distance relationship ever since. She stayed in Vancouver while Smith moved to Seattle and finally to Blaine.

The couple would see each other regularly because the drive between their respective homes is only about 40 minutes.

"For a while, the distance was very manageable," Bosello said. "Then the pandemic hit."

They are not the only couple who had the idea to tie the knot at the border.

Before the park reopened, Liz Peters' parents drove seven hours from Portland, Oregon, to celebrate her wedding along 0 Avenue, while still standing on American soil. The couple married nearby and met her parents right after to celebrate because they couldn't be at the ceremony.

"I'm very close with my parents and could never imagine them not being there on my wedding day," said Peters, 27, who lives in Abbotsford, B.C.

But as word started getting out about the lucky loophole at Peace Arch Park, lovesick Americans and Canadians began showing up there to be together.

The day after Smith and Bosello tied the knot, Ryan Hamilton, 26, and Savannah Koop, 25, did, too.

Koop, a Canadian, and her American husband also met regularly along 0 Avenue before the park reopened, each with their own coffee and snacks, for weekly date nights.

"It was so hard to be so close yet so far," Koop said.

When the couple heard the park reopened, they also decided to make their love official in the only place they could be together, after their original wedding was canceled because of the pandemic.

This spontaneous ceremony, they said, was even more special after their time apart.

Entryways from both the American and Canadian sides are patrolled, and the park itself is surveilled to ensure no one exits the wrong side. But as long as visitors stay within the 42-acre area, they are permitted to roam freely throughout the grounds. According to the park's website, it is a space that is "devoted to peace and serenity."

Chelsea Horner, 30, who is in the midst of an American immigration process, took a ferry with her two kids from Canada to meet her husband, who is based on Whidbey Island, Wash.

"Anything is worth it to be able to see the person you love and unite your family," she said.

The couple, who normally commute back and forth, have plans to meet at the park again for Father's Day this weekend.

In addition to couples, it's been an important meeting spot for other loved ones.

Kylie Hults, 34, visits with her parents at the park. She drives two hours from Brenton, Wash., while her folks travel 10 minutes from the Canadian border.

Hults, who is an only child, said this time together has been very important for her parents during the pandemic.

For them, and many others, Peace Arch Park is "the happiest place on earth."

"It is the Disneyland of the Pacific Northwest," said Erik Buddingh, 33.

The Canadian man ventured to the park to reunite with his American girlfriend, who flew from Indiana to Seattle and then drove to the border for a few stolen hours with him.

"The park is filled with grandparents meeting their grandchildren for the first time, families reuniting after being divided by the border closure, couples coming together and even old friends meeting just to catch up," Buddingh said.

Time apart from his long-distance love has taught him to appreciate the little things, he said.

Above all, though, "this park shows that love knows no borders."