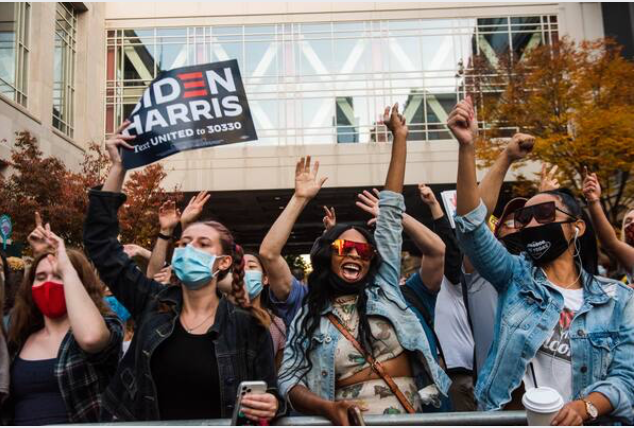 Joe Biden and Kamala Harris supporters celebrate Saturday outside the Pennsylvania Convention Center following the victory of the President-elect, in Philadelphia. MUST CREDIT: Photo by the Amanda Voisard for The Washington Post

Rep. Barbara Lee began her political career on the campaign of the first Black woman to run for president, Shirley Chisholm, serving as one of Chisholm's delegates to the 1972 Democratic National Convention.

Nearly fifty years later, Lee, D-Calif., watched as Kamala Harris name-dropped Chisholm at nearly every rally as a candidate for president and, later, the Democrats' vice-presidential nominee. On Saturday, Lee celebrated as she learned that Harris is now the first woman elected vice president of the United States.

"I have been waiting and working for this moment. Shirley Chisholm paved the way for so many of us, including myself," said Lee, who represents Harris's hometown of Oakland. "She knew what the challenges were then in terms of racism, in terms of sexism. And also that we had to keep fighting, that this was a marathon, but sooner or later, the country would know what we knew about Black women."

For many, Harris's victory was as much a celebration of that marathon as it was of Harris herself - of those who came before as the one arriving now. Harris, the daughter of Indian and Jamaican immigrants, made such an acknowledgment at nearly every campaign stop she made. She evoked heroes from the civil rights movement and during the Democratic primary she nodded to Chisholm with the colors of her campaign merchandise - yellow, red and blue, the same as Chisholm's - and emphasized the weighty piece of advice her mother gave her as a child.

"Kamala, you may be the first to do many things, but make sure you're not the last," Harris would often tell crowds, reciting the words of her immigrant mother, a breast cancer researcher at the University of California at Berkeley.

Harris is now the first Black woman, Asian American and graduate of a historically Black college or university to ascend to one of the nation's two highest offices. Women across the country are now working to ensure she is not the last, celebrating not only the breaking of the glass ceiling, but of a ladder to and through it.

"We will see in 2021, 2022 and beyond a record number of Black women" running for office," said Glynda Carr, co-founder of Higher Heights and a member of Alpha Kappa Alpha Sorority, just like Harris.

"Her presence extends beyond those who voted for her," Carr said of Harris. "She has forever changed the fabric of women's political leadership, even for those who didn't support her."

Carr, whose organization supports women of color in politics, was usually organizing on election days past and had to mail in her ballot. This year, she ordered a pair of Chuck Taylors - Harris's shoe of choice on the campaign trail - via overnight mail so they would arrive in time, laced them up Tuesday morning, and headed to the polls.

Some supporters were overwhelmed by emotion after learning that President-elect Joe Biden and Harris won the election. Former Democratic National Committee Chair Donna Brazile cried while commentating about Harris's win on Fox News. CNN Commentator Van Jones wept openly about Biden's win and the impact a Biden-Harris ticket could have on minority families.

Others found themselves unexpectedly moved.

"I did not think I would be this moved to see a black woman/south Asian woman/woman as Vice President. But I am. It's so wonderful. My nieces know so much more is possible now," tweeted author Roxane Gay, whose work often centers on race and gender.

Cable news cameras in the streets of Washington, New York and Philadelphia caught glimpses of women wearing shirts with Harris's face on them. The Biden campaign has been selling them for some time, including one that features a picture of Harris as a little girl alongside the phrase "the first, but not the last."

"Representation only goes so far," said Nik Dodani, and Indian American actor who was active in organizing that community in support of the Biden ticket. "Yes, we want our elected officials to look like us, but they also have to represent our values, and that is why Kamala D. Harris means so much to the South Asian community."

Padma Lakshmi, the host of the television show "Top Chef," said Harris brings a mix of backgrounds and experiences to the White House that have never been seen before.

"I'm 50 years old. It's not been easy to be a person and woman of color in this country," said Lakshmi, who was overcome with emotion talking about Harris's rise.

"It's very hard to wrap your head around what it's like to be in someone else's skin. And the psychological impact of that is so deep and so foundational . . . you still feel like a second-class citizen. You still feel a little bit like you don't have the right to reach for the same things as your White counterpart or peer does."

Lakshmi remembers her early days in television, when Sanjay Gupta was one of the few Indian Americans in prominent television roles and her White neighbors could hardly name more than a few South Asian actors. Now, she said, there are far more, rooting for one another as they carve out their place in American cultural awareness.

Actress Mindy Kaling tweeted: "Crying and holding my daughter. 'look baby, she looks like us.' "

Others hailed Harris's victory as historic, but said far more needs to happen in a polarized nation that is grappling with a movement to end systemic racism, sparked by the deaths of numerous Black people at the hands of police in recent years.

"Very curious to see how media covers the historic election of Kamala D. Harris considering that white hostility toward the election of Obama is how we ended up with Trump," wroteBree Newsom Bass, an artist and activist.

Brazile said she thought Saturday morning about her mother and grandmother, Black women who did not have the right to vote.

"To be the last to get voting rights, to be those who just waited and waited for our turn," she said.

Brazile reflected on the legions of women who paved the way for Harris, and the men who believed in them. Now, there has been a Black president and, soon a woman of color vice president.

"We have made this country what it said it was going to be, a country for all of us," Brazile said, tears wet on her cheeks. "But this is a country that now has to get back to work. So I'm going to dry my tears and get ready to work."