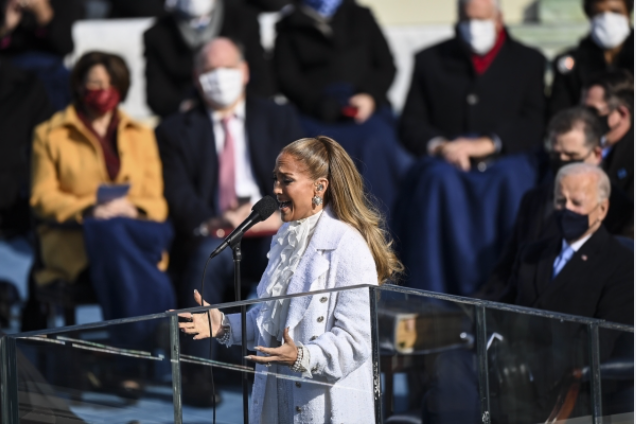 Jennifer Lopez sings before Joe Biden is sworn in as president on Jan. 20. MUST CREDIT: Washington Post photo by Jonathan Newton

Jennifer Lopez had already sung the famed folk song "This Land is Your Land" and was midway through "America the Beautiful" when she paused to deliver a patriotic message at President Biden's inauguration: "One nation, under God," she said in Spanish. "Indivisible, with liberty and justice for all."

Then Lopez started singing again, but it wasn't either of the numbers she had previously announced. "Let's get loud!" she belted as the United States Marine Band soared into a crescendo.

Lopez has been singing "Let's Get Loud" for decades. The dance track, which first appeared on her 1999 debut studio album "On the 6," has since become a signature song for the multihyphenate entertainer - despite the fact that it was actually written by Gloria Estefan.

The reaction on social media was swift and collective. (To paraphrase: Did that really just happen?) "Let's Get Loud" is a definitive party song, the kind that might get wallflowers onto the dance floor or amp up an early-morning Zumba class. The up-tempo dance track has an important message - calling us to live in the moment and be comfortable in our own skin - but it's not necessarily the music we associate with inauguration performances. But this was an inauguration like none other.

Wednesday's ceremony celebrated the transition of power from President Donald Trump to Biden at a pivotal and largely solemn moment for the country. Biden and Vice President Harris took their oaths of office in front of the U.S. Capitol, exactly two weeks after a violent mob - buoyed by Trump's persistent efforts to undermine the results of the presidential election - stormed the hallowed building.

During his inaugural speech, Biden asked the nation to join him in silent prayer for the "400,000 fellow Americans" who have died of covid-19. On his first day in office, Biden signed executive orders aimed at getting the pandemic under control and undoing controversial measures enacted by the previous administration, including hard-line immigration policies that left hundreds of migrant children separated from their parents at the U.S.-Mexico border.

Despite all of the challenges faced by the Biden administration, the inaugural ceremony struck a hopeful tone - not least because it featured Harris's historic inauguration as the first woman, first Black person and first person of South Asian descent to become vice president.

Lopez's presence - alongside other celebrities including Lady Gaga, who sang the national anthem, and Garth Brooks - was itself a signal that change is on the horizon. Despite his long-looming presence in pop culture, Trump never attracted A-list celebrities to the White House. Biden, meanwhile, was vice president during an administration that was groundbreaking in its embrace of pop culture.

In that regard, "Let's Get Loud" wasn't as out of place in Lopez's medley as it might have seemed at first listen. It was the song Lopez mashed up with Bruce Springsteen's "Born in the U.S.A." at last year's Super Bowl halftime show, which she co-headlined with Shakira. That performance, which featured Lopez's daughter Emme, made less-than-subtle statements about the Trump administration's policies on immigration and aid to hurricane-ravaged Puerto Rico. Children sat in illuminated cages as Lopez, clad in a large Puerto Rican flag, shouted out "Latinos!"

A children's choir, wearing hoodies that evoked the U.S. flag, crooned a snippet of "Let's Get Loud": "Every feeling, every beat can be so very sweet you got to taste it," they sang. "Let's get loud, let's get loud, turn the music up / let's do it / come on people / let's get loud."

If the Super Bowl performance was a call to action - a demand to be heard - Biden's inauguration marked a fitting reprise. On Wednesday, Lopez seemed to take in the magnitude of the moment as she sang out the familiar line from one of her most popular songs. It was unexpected and very J-Lo. It was anything but meaningless.