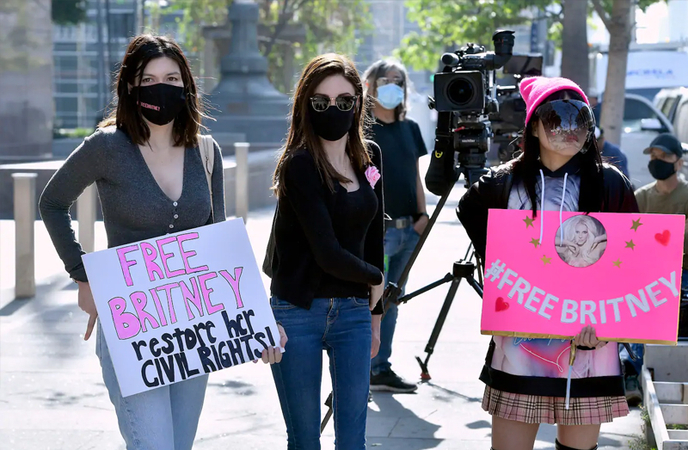 The suddenly buzzy saga of Britney Spears and her controversial conservatorship went to court once again Thursday - with positive but somewhat underwhelming results for fans and supporters of the #FreeBritney movement, who have long hoped to see the singer released from the arrangement that has for years given her father significant control over her daily life and finances.

Judge Brenda Penny ruled on Thursday afternoon that Bessemer Trust, the financial office that Spears requested replace her father as conservator of her estate, will co-manage her finances alongside Jamie Spears, and set another hearing date of March 17.

In the days since the Feb. 5 release of "Framing Britney Spears," the documentary devoted to explaining the prolonged and controversial conservatorship, a number of prominent media figures from the 1990s and 2000s have come under renewed scrutiny. Viewers of the documentary have condemned journalists and jokesters alike for their comments to and about Spears years ago - about her sexuality, her mental health, her parenting - which now in hindsight seem invasive, rude and often downright disrespectful, while other celebrities have been retrospectively commended for their compassion and insight at the time. Meanwhile, the people closest to Spears have used the documentary's popularity as an opportunity to make the rare public statement about her conservatorship.

Over the past week, viewers of "Framing Britney Spears" have resurfaced old interviews and news stories - and some have demanded apologies. Old comments from Justin Timberlake, Spears's ex-boyfriend at the height of her fame, were among the many that surged back into public view. The documentary revisits an interview with Timberlake in which he claims to have had sex with Spears (despite her statements at the time that she was waiting for marriage to have sex), and released a music video that heavily implies Spears cheated on him. Now, unrelated posts on Justin Timberlake's Instagram feed have been overrun with comments like "#freebritney" and "So when are you apologizing to Britney?"

ABC journalist Diane Sawyer, meanwhile, has also been criticized online in recent days for interview footage that appears in the "New York Times Presents" episode. After questions about why Spears "did something that caused [Timberlake] so much pain, so much suffering" in the wake of their breakup, Sawyer informs Spears that the wife of the governor of Maryland said she would "shoot Britney Spears" if she could, then appears to defend the statement.

Former NBC anchor Matt Lauer was roundly chastised, too, for the footage that appears in the documentary. Lauer asked Spears in a tense 2006 interview to respond to accusations that she was a bad parent; later in the conversation, Spears cried.

The rest of that interview resurfaced after "Framing Britney Spears" debuted. As many pointed out, it also contains troubling voice-over segments in which Lauer, who was fired in 2017 after multiple former colleagues came forward with allegations of his inappropriate sexual behavior at work, casts doubt on Spears's claims of virginity because of her "sexy videos."

Many viewers of the Hulu documentary, though, praised and recirculated video clips of other celebrities coming to Spears's defense when her mental health issues were being ridiculed. A Larry King interview with filmmaker Michael Moore that is included in the episode sees Moore remarking offhandedly that "It would be less sad if we just left her alone. Why don't we just leave her alone and let her just go on with her life?" As writer Natalie Shure remarked on Twitter, "Between his defense of Britney Spears and his anti-war Oscars speech, Michael Moore's cultural commentary from the 2000s has aged pretty damn well."

Former late-night host Craig Ferguson was also among those who sounded the alarm as to what the relentlessly invasive press attention was likely doing to Spears and others like her. In a clip from his 2007 monologue that went viral this week, Ferguson compares the tabloid-consumption culture of the day to the injury videos often depicted on "America's Funniest Home Videos" - entertaining until you realize the person filming is taking videos instead of helping the child who's just hurt herself in an unfortunately comical way.

The discussion online about "Framing Britney Spears" has grown to such a volume that even those close to Spears who have remained quiet for years about her legal situation made statements about it. Her ex-husband Kevin Federline told E! News via his attorney on Monday that while he has "stayed out of her conservatorship issues," he believes Jodi Montgomery - the professional conservator appointed to supervise Spears's daily life on an interim basis after her father stepped down temporarily in 2019 - "has done an admirable job."

Spears's boyfriend since 2016, however, personal trainer Sam Asghari, chose a slightly less polite route. He called Jamie Spears a curse word on his Instagram story on Tuesday, then later told TMZ he hopes they'll be on good terms in the future once Jamie "starts treating his daughter right."

Even Spears herself appeared to address the allegations presented in the documentary. Maybe. Cryptically, if so.

On Instagram, Spears posted a video from a past concert. "Can't believe this performance of Toxic is from 3 years ago !!! I'll always love being on stage," she wrote. "But I am taking the time to learn and be a normal person ..... I love simply enjoying the basics of every day life !!!! Each person has their story and their take on other people's stories !!!! We all have so many different bright beautiful lives !!! Remember, no matter what we think we know about a person's life it is nothing compared to the actual person living behind the lens !!!!"

Fans and supporters of the #FreeBritney movement will of course likely know more when Spears, her father and the lawyers involved in their case reconvene in a little over a month. Those fans can take today's hearing as a step, however small, in the direction of Spears's increased autonomy.