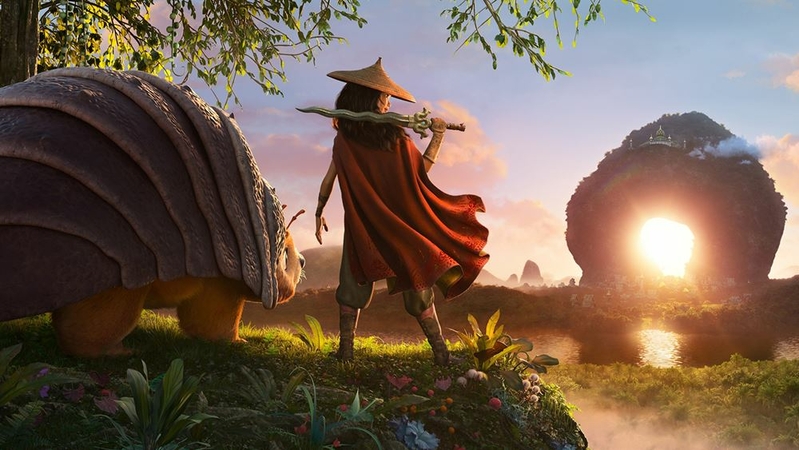 Kelly Marie Tran stars as a Southeast Asian princess on a quest, center, in "Raya and the Last Dragon." MUST CREDIT: Disney

Taking its core inspiration from the naga of Asian folklore - semi-divine beings that shapeshift between serpent and human form, a la Nagini of the Harry Potter universe, which most famously borrowed the idea - Disney's gorgeously animated, entertainingly told fantasia "Raya and the Last Dragon" is a visual feast. If the ingredients of the story itself, which centers on a plucky warrior princess on a quest to unite five widely scattered pieces of a magical, broken gemstone, are a bit familiar, the stirring sweep of this adventure, set in the fictional Southeast Asian land of Kumandra, and told with both cheeky humor and heart, is transporting.

Its titular teen heroine (voice of Kelly Marie Tran) is, along with her father, Benja (Daniel Dae Kim), a guardian of the aforementioned power-stone: the sole remnant of a battle that took place some 500 years before the main action of the film begins. In response to an assault by sinister beings called Druun, we learn from a prologue that several benevolent dragons once sacrificed themselves to save Kumandra, leaving behind only that mystical crystal - and a legend that one of the dragons, a water spirit named Sisu, may have somehow survived. 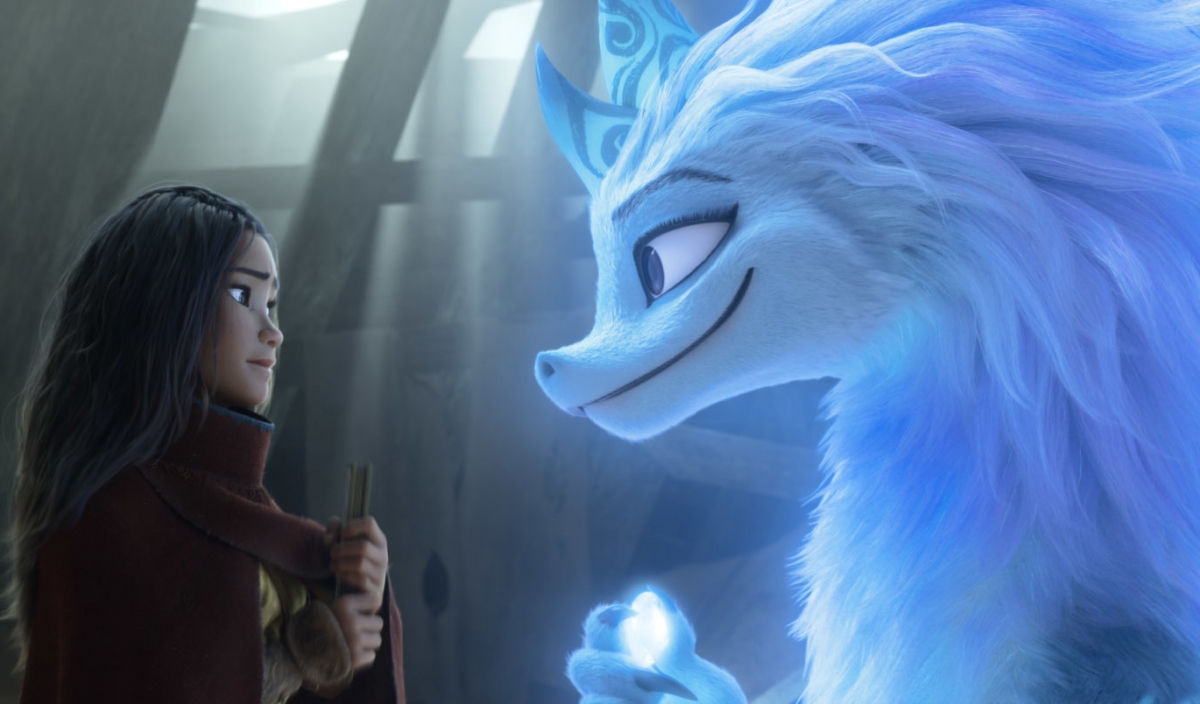 In the aftermath, Kumandra has fragmented into five separate kingdoms, each maintaining a kind of cold war with the other four. When peace talks organized by Benja collapse, and an attempt to steal the stone causes it to break apart into chunks - each of which is spirited away to a different kingdom - action must be taken.

That mission falls to Raya when the Druun - described as a plague "born of human discord" - return, transforming Raya's father and many others into stone statuary. (The textures of this world are vividly rendered. But be advised. The Druun are the scariest: Dementor-like swarms of swirling, dark, destructive evil. They're an effective, and chillingly relevant, metaphor for human divisiveness.) Armed with a sword and a piece of the stone, which has the ability to repel Druun, and riding a giant pill bug named Tuk Tuk (Alan Tudyk, making, um, giant pill bug sounds), Raya sets out to find Sisu, steal back the other bits of crystal and save the world. 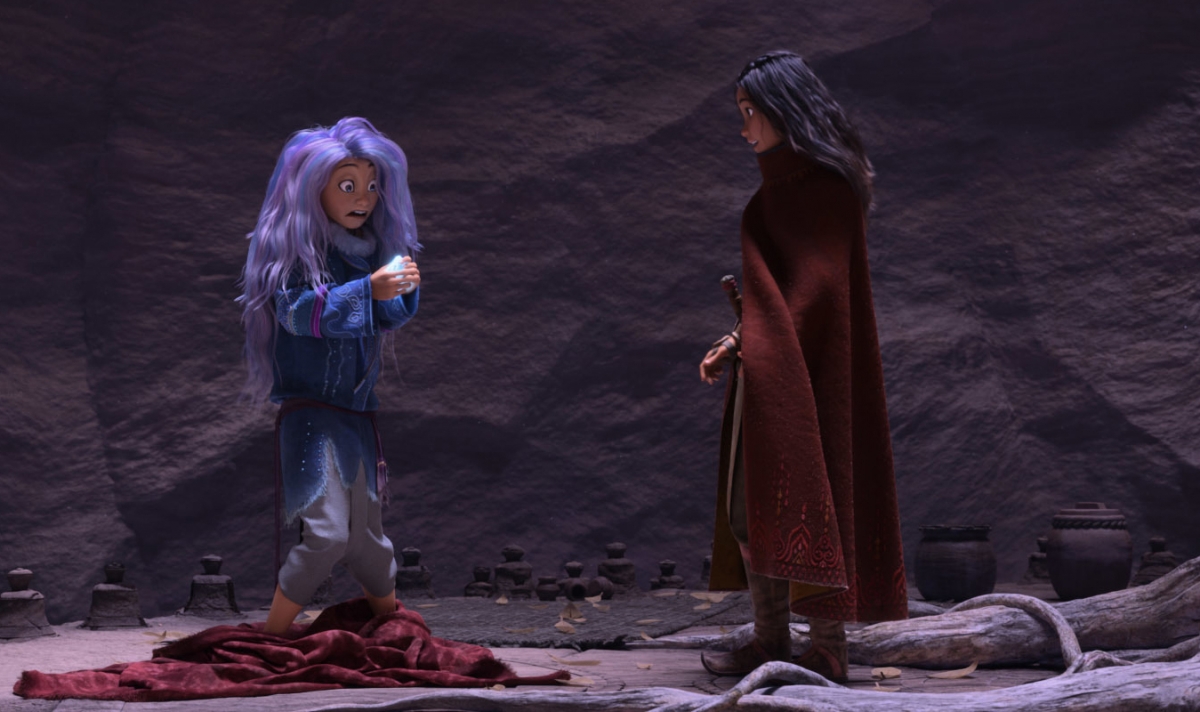 As with many a heist film before it, this film's protagonist accumulates a few accomplices along the way: an orphaned boy-chef (Izaac Wang), a gentle man-mountain (Benedict Wong), a baby con-artist (Thalia Tran) and several adorably acrobatic, monkey-like sidekicks.

Oh, and a dragon.

Raya finds and resuscitates Sisu (Awkwafina) early on - which is great because the character is a gem herself. Morphing between dragon and somewhat goofy adolescent human with a mop of blue hair and oversize clothing that make her look like a cartoon cousin of Billie Eilish, Sisu brings spunk and comedy to the dark tale. Awkwafina's raspy, endearingly dim-bulb performance adds enormous, quirky charm to the film.

Of course, besides the Druun, there's also a human nemesis: Namaari (Gemma Chan), a warrior princess from another kingdom who's a complicated foil to Raya: part Sisu fangirl, part frenemy.

In its broadest contours, "Raya" isn't all that different from stories we've seen before, echoing the Lord of the Rings cycle and the Infinity Stone plot line of the Marvel Cinematic Universe. But it also evokes a world, one of sight and sound - even, at times, of smells and tastes - that we haven't seen before. Kumandra feels vibrantly real, even in, say, scenes in which we watch, with awe, a dragon prance on raindrops. Its overarching theme of sacrifice is also a powerful one.

In that sense, it's an aspirational movie with its feet planted firmly in the soil of the real world: one in which the plague of human discord is sorely in need of a little magic right now.