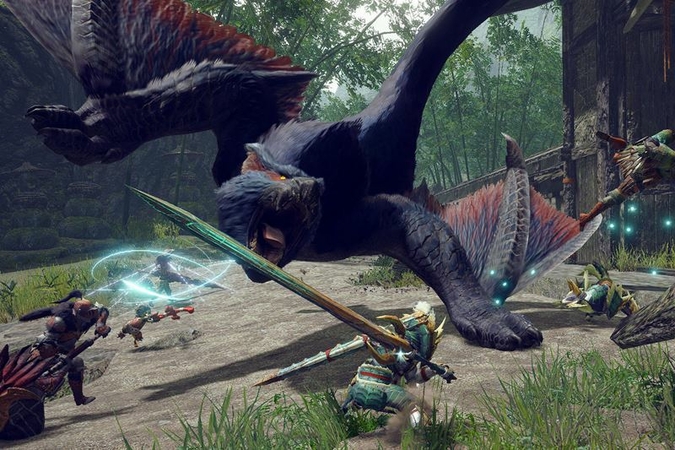 I can hardly believe a game this large, that runs this smoothly, exists on the Nintendo Switch.

The Switch is easily the weakest console on the market today. You won't see ray-tracing effects or smooth framerates. The handheld hybrid has been host to some remarkable ports of complicated titles, most notably in the "Doom" series. But when it comes to original titles, it's been less of a technical showcase.

"Monster Hunter Rise" is an original, made-for-Switch Capcom title that shatters expectations of what to expect. For all intents and purposes, it's an even bigger experience than "Monster Hunter World" on PC and other consoles. This is grand news for any hunters who joined the bandwagon with "World," currently Capcom's best-selling title of all time, bigger than its "Resident Evil" or "Street Fighter" series.

This is achieved through Capcom lowering texture details and environmental asset fidelity for much of the hunting grounds, which seem to be larger than any found in "Monster Hunter World." But the game retains much of the luxurious animation work and streamlined action that elevated the series beyond its niche core audience. Also, you get a customizable dog that you can ride, along with the series-standard cat warriors called Palico.

It helps that the art style leans further into high fantasy Japanese mythos, utilizing Capcom's RE Engine that has powered the company's recent successes in "Resident Evil" and "Devil May Cry." Gone are the saturated, filmic filters and gritty textures of "World." Instead, whimsy rules the day, even when it comes to the game's chimerical monster designs. There's less fur, but everything moves as beautifully as it ever did.

I never even noticed the graphical downgrade, because I was too busy marveling in awe at the fact I was running through a beautifully lit bamboo forest on my wolf Lincoln (named after my sister's dog) like I was Princess Mononoke on the hunt, while my cat, spellsword warrior Jack, followed behind. Did I mention the two pets are customizable? Jack has an orange coat and stripes, just like my real cat. Even when playing this game by myself, I still cheer when Jack comes in to knock me safely away from a monster's attack, or when Lincoln leaps onto a creature's back to rip at its jugular.

Animation has been a key part of the game's mechanics, as attack windups inform your own next move. Since "Rise" is moving toward more fantasy, the team seemed to have more fun creating wild, imaginative attacks. One midgame monster is a dragon-monkey hybrid. Seems like a simple enough concept, until you remember that being half monkey means this dragon has a prehensile tale, and will swing and stand on it as a monkey would. It's shocking, observing how these creatures move.

Online, the game holds up well, at least when the servers were live for the review period. I was shocked at the absence of Nintendo's famously shoddy Switch online experience in my "Rise" sessions. We had four players, all armed with our own dogs, with special effects exploding everywhere around us, and the game's performance never took a hit. But take that with a grain of salt; the game's real test will come when everyone in the world can access it. I hope that the short down period for servers during the review period isn't a bad omen, but we won't know until launch on March 26.

When it comes to the gameplay loop, there's little to differentiate it from "Monster Hunter World," and that's actually a remarkable thing. "World" was a massive upgrade for the once-niche series, streamlining its action while making it look prettier than ever. That "Rise" manages to match this almost one to one is in and of itself a remarkable feat. It's also not a knock that "Rise" takes after "World" so much. After all, the "Monster Hunter" series is one of those giant mega-franchises (over 64 million sold worldwide) that reiterates the formula with small updates because people already love the core loop.

The new "rampage" game mode is such a simple addition, it's shocking how far the series has gone without it. It's so good, too, that it's hard to imagine future entries without it. Simply put, it's a tower defense game throwing squads of large monsters at four players. Around each arena, you can place traps, ballistae and summon special non-playable characters to assist you. These fights are frantic, short, loud and, of course, highly rewarding.

There's nary a negative to mention. Anything "wrong" with the game comes down to pure preference. The game's grind will never end, and if the promise of stronger and cooler-looking outfits and weapons doesn't intrigue you, this game might not be for you. Like others in the series, it's light on story and lore. "Monster Hunter" is simply a series of reasons for you to hunt monsters.

The loot is the motivation, and fortunately, this is probably the most tightly balanced loot grind in gaming today. It's a masterfully balanced system that ensures that any hike through the game's several massive hunting grounds is fruitful, whether it's grabbing ore for your weapons, or getting extra skins and tails for other items. Each monster has its own strengths and weaknesses, and their parts can be crafted into armor and weapons you wield against monsters of other strengths and weaknesses.

This year is looking pretty dry for big title releases as the world continues to grapple with the pandemic, and huge titles are seeing delays. The Nintendo Switch in particular has had a bit of a dry spell, but "Rise" comes in like a kaiju out of the tide. This is probably the best "Monster Hunter" game to date, and an easy, early contender for 2021′s best game.