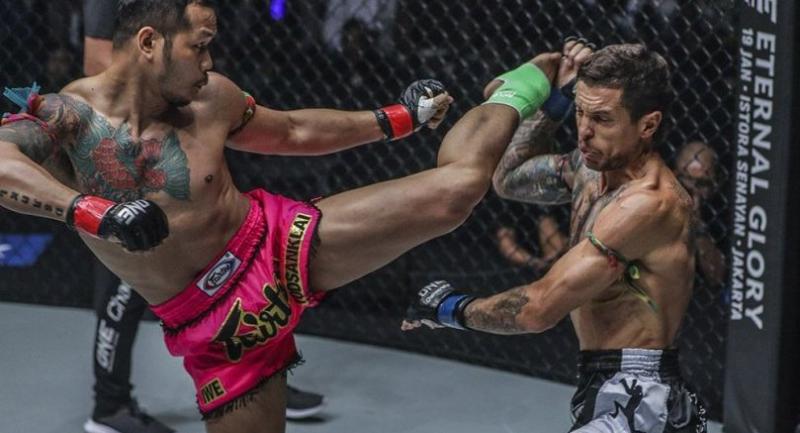 The Kingdom's boxing star Yodsanklai IWE Fairtex sent Australian Luis Regis to the floor in just 2.08 minutes to win the One Super Series Muay Thai featherweight bout as two other countrymen reigned supreme during the One: Destiny of Champions at the Axiata Arena in Kuala Lumpur on Friday.

The season-ending event of 2018  featured a series of thrilling contests, punctuated by a compelling headline bout that earned a warm reception from the passionate fans in attendance. In the main event, Muay Thai legend Yodsanklai IWE Fairtex authored a fantastic first-round knockout, making quick work of opponent Luis Regis.

Muay Thai legend Yodsanklai  put together a highlight-reel performance in the main event of ONE: DESTINY OF CHAMPIONS, dominating opponent Luis Regis of Australia to win by first-round knockout. Yodsanklai came out of the gates aggressively, pressuring Regis against the cage fence.

A one-two combination hurt Regis, followed by three unanswered uppercuts on the inside that dropped the Australian. Regis was out before he hit the canvas and Yodsanklai was awarded the scintillating knockout.

"My plan was to beat him by KO as quick as possible as I didn't want to fight too long and get hurt. After I got him with a few upper-cuts, I was confident I did it," said Yodsanklai. Three Thais were in actions in front of the cheering crowds on Friday and all were victorious. The other two were Petchmorrakot Petchyindee Academy who defeated Liam Harrison by Knockout at 1:15 minutes of round 2 in the ONE Super Series Muay Thai Featherweight bout while debutant Panpayak Jitmuangnon defeats Rui Botelho by Unanimous Decision (UD) after three rounds in the Muay Thai Flyweight bout.

"I was quite excited because this is my first international bout. As I made the entrance, there were lights and music which was so different from  muay thai events in Thailand. I had to calm down and maintained my normal standard but it was not easy. I was a bit too careful as I didn't want to make any mistake in my first appearance here," said the 22-yera-old Panpayak.

In the co-main event of the evening, Kiamrian Abbasov of Kyrgyzstan made quick work of hometown favorite Agilan “Alligator” Thani of Malaysia, finishing his opponent midway through the very first round.

At the sound of the opening bell, Abbasov immediately went for a body lock on Thani, taking matters to the ground. Every time Thani would try to get back up to his feet, Abbasov chained his takedowns together to bring it back to the mat. Capitalizing on an opening, Abbasov took Thani’s back and latched onto a rear naked choke to end the night early.

Radzuan connected on various combinations on the feet all throughout the bout, and when the action hit the canvas, Radzuan showed great grappling defense and even attacked with a few submission attempts of her own. Although Huang would remain dangerous off her back, consistently threatening with submissions, Radzuan proved elusive and crafty enough to defend against the majority. In the end, all three judges scored the bout in favor of Radzuan to win by unanimous decision. After a spirited first round of action that saw both men land significant strikes, Petchmorrakot ended matters abruptly in the second frame. Known for his sharp elbow shots, Petchmorrakot landed an elbow right on the button and Harrison was unable to recover.

Former ONE Middleweight World Champion Vitaly Bigdash ended the year on a triumphant note, toppling Japanese debutant Yuki “Yu-King” Niimura via first-round submission. After a solid exchange of offense for the majority of the first round, Bigdash was able to trap Niimura in a bad position, catching the arm and the head in a reverse triangle. From dominant position, Bigdash compelled Niimura to wave the white flag with a reverse triangle armbar, reinserting his name into the win column with a statement-making victory.

Japan’s Yosuke “Tobizaru” Saruta pulled off a major upset in his promotional debut, defeating former ONE Strawweight World Champion Alex “Little Rock” Silva of Brazil by way of unanimous decision. Saruta posed problems in both the striking and grappling departments against Silva over the course of three rounds.

The Japanese warrior consistently clipped Silva with crisp combinations. Meanwhile, his unrelenting attacks on the ground overwhelmed Silva in the later rounds as he smoothly secured dominant positions to pound the Brazilian out. In the end, all three judges scored the bout in favor of Saruta.

Panpayak was dominant all throughout, rattling Botelho with stinging kicks to the midsection and even scoring a knockdown in the second round with a roundhouse kick. Botelho managed to keep the bout competitive in the third and final frame, but Panpayak remained dynamic in landing his shots and cruised to a clear-cut unanimous decision win.

In a ONE Super Series Muay Thai contest, “Jordan Boy” Mohammed Bin Mahmoud of Malaysia sent the crowd at the Axiata Arena into a frenzy after knocking out Stergios “The Greek Dynamite” Mikkios. Mahmoud’s world-class striking was on full display as he easily picked his spots, including a razor-sharp elbow that dazed Mikkios.

Mahmoud then capitalized on Mikkios’ vulnerable state to score a knockdown with a dazzling combination of strikes. Although Mikkios managed to beat the count, Mahmoud dropped him once again, this time with the Greek warrior signaling to the referee that he could no longer continue. The victory was then awarded to the Malaysian hometown hero.

Former ONE World Title challenger Mei “V.V” Yamaguchi of Japan turned in a solid all-around performance, beating Jomary “The Zamboanginian Fighter” Torres of the Philippines via unanimous decision. In every aspect of the match, Yamaguchi was a step ahead of her Filipina opponent.

Yamaguchi picked Torres apart in the stand-up, and easily outmaneuvered her foe on the mat.  After three rounds of action, Yamaguchi did more than enough to earn the win on all three judges’ scorecards.

Cambodian striker Chan Rothana rallied back from a tough opening frame to notch a technical knockout win over Indonesia’s Abro Fernandes. After surviving a series of takedowns and a submission attempt from Fernandes, Rothana turned the tide in the second round with his superior striking. With 54 seconds remaining in the period, Rothana earned the finish with a flurry of strikes, capped off by a well-placed knee that put Fernandes down for good.

Kicking off the action at ONE: DESTINY OF CHAMPIONS, Sovannahry Em of Cambodia put on a show in her promotional debut as she made quick work of Ukraine’s Iryna “Delsa” Kyselova. Em effortlessly imposed her will on her opponent, scoring a takedown and latching herself onto Kyselova’s back. In back mount, Em relentlessly pounded Kyselova with solid blows, forcing the referee to call a halt to the contest and award the technical knockout victory to the Cambodian debutante.

Official results for ONE: DESTINY OF CHAMPIONS