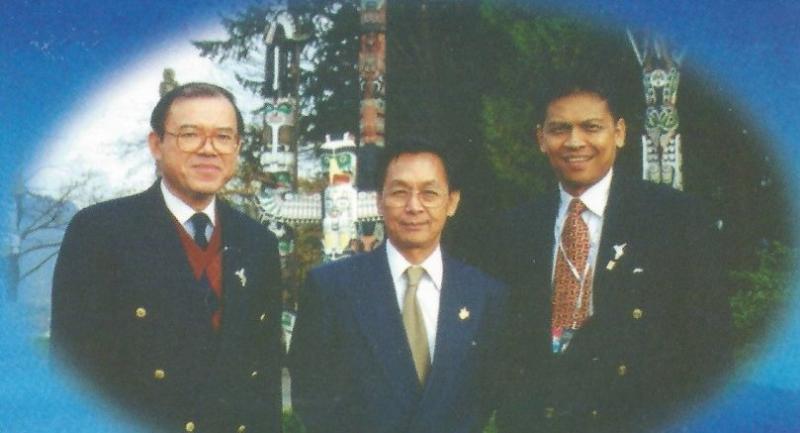 Surin Pitsuwan: Memories of a true comrade in arms

We fought the 1997 crisis side by side on ‘Team Thailand’, but his greatest legacy is the Asean Dream

People like Surin Pitsuwan, who combine intellectual capability with eloquence and political perceptiveness, do not need eulogies and platitudes on their deaths for us to embrace them in our memories. Their rich lives are in themselves testimony to their greatness, leaving an indelible mark on our generation.
When I first met Surin, through Akorn Hoontrakul’s introduction at his Imperial Hotel in the early 1980s, he was already a well-known young lecturer at Thammasat University and a prolific Bangkok Post columnist. We were supposed to be discussing monetary measures (I was still at the Bank of Thailand) for one of his articles but we ended up debating the ever-intriguing Thai political scene. We gradually came to learn of each other’s political ideology and became friends and “comrades-in-arms” for the last four decades.
Our paths crossed again in 1986 when we both entered Parliament under the Democrat Party banner. Surin was already carving a reputation as an eloquent speaker on international affairs. From time to time we would find ourselves on similar conference circuits in Asia making friends with those rising stars of the region whom we would go on to encounter in our political careers.

An unbeatable team
Some of those connections were made during Thailand’s traumatic experience of the 1997-’98 financial crisis. As foreign minister at the time, Surin had a significant role in international talks to relieve Thailand’s obligations, the most urgent duty being to cancel the purchase of a squadron of F-14 aircraft which the US duly sanctioned without penalty. Besides the minimal financial support from the International Monetary Fund, Thailand had to solicit further assistance (in trade and finance) from elsewhere, notably China and Japan. The Foreign Ministry under Surin always gave a lending hand wherever necessary. One of Surin’s proudest achievements was arranging a meeting between Prime Minister Chuan Leekpai and President Bill Clinton in Washington. Clinton said his appreciated the Chuan administration’s efforts to help free Thailand from the crisis’ stranglehold.
Our cooperation in what Surin called “Team Thailand”, with him at the helm of the Foreign Ministry and me at Commerce, was exemplary through the crisis period and thereafter. For any nation to be successful in the global arena, it is necessary to harmonise and unify the diverse ministerial and related interests into a single strategy platform. With “Team Thailand” we could jointly penetrate markets in various parts of the world and help drive recovery from the 1997-’98 crisis with well-coordinated international economic policy. The effort even managed to weather strong headwinds from the dotcom crisis at the turn of the century.
In the meantime Surin was also busy on different fronts. He was helping the UN negotiate peace during the Aceh conflict in Indonesia, arranging for Japan’s financial support for Asean peacekeeping forces in East Timor, and leading the Thai Haj pilgrimage twice to Saudi Arabia. When we started working on a cooperation framework between Asean and the European Union, Surin and I took the proposal to Prime Minister Goh Chok Tong of Singapore who agreed on the ASEM (Asia Europe meeting) framework and was pleased to have Thailand host the first ASEM meeting in Bangkok in 1996.

WTO triumph
When in 1999 I was advised by member countries of the World Trade Organisation to apply to head the organisation, Prime Minister Chuan gave me his blessing.
But the WTO campaign turned out to be unnecessarily acrimonious. While I was leading the race, the Clinton administration announced its outright objection to my candidature without giving any explanation. But the group of countries that supported Thailand would not give up the fight, and neither would the Thai, spearheaded by Surin, then deputy foreign minister MR Sukhumbhand Paribatra and our colleagues in the Foreign and Commerce ministries. Sukhumbhand made several trips abroad to convey our messages and Surin himself was involved in talks with our supporters spread across the world. In one major Berlin meeting with EU foreign ministers, Surin came close to clinching the full support of the EU after daylong negotiations, only to be torpedoed by one member country at the last minute. Leon Brittan expressed his annoyance to us about the absence of EU solidarity on the matter.
With vocal support from the Thai public and a swathe of WTO member countries, we managed to clinch an unprecedented arrangement. From the messy negotiations emerged one proud moment for Surin, when US Secretary of State Madeleine Albright phoned him from her aircraft while on a peace mission to divided Yugoslavia.
US state secretaries do not pick up the phone easily, but Albright had to convey the message to Surin that the White House would agree to sharing the term of WTO appointment.

His historic achievement
But Surin’s most remarkable and historic achievement will remain the legacy he left in raising the global profile of Asean. He turned the organisation into a “networked secretariat”, building up connections for Asean throughout the world. I used to joke with Surin that during his time as Asean secretary-general, I ran into him more often further afield than in the Asean region. Smiling, he would point to the clouds and say, “My office is in the sky.” While most regional integration efforts around the world now seem to be in a shambles, Surin was successful in single-handedly conveying the Asean message to the world that diversity could also be a real source of strength for a regional grouping. Visiting US secretary of state Hillary Clinton once asked Surin how serious he was about the implementation of the Asean Charter with its three pillars of political-security, economic and socio-political community. Surin answered he was dead serious and went on to give America’s top diplomat an extended explanation comparing the Asean Charter to the US Constitution and the Declaration of Independence. Obviously impressed, Clinton quipped “Yes, professor” as Surin ended his exposition.
During Surin’s time at the Secretariat, the Economic Research Institute for Asean and East Asia (ERIA) was established with support from the Japanese government to strengthen the research backbone of Asean. I was flattered when ERIA presented me with its first Asia Cosmopolitan Award in 2012 in recognition of contributions to the development of a peaceful and stable East Asia community. We both believed in Asean centrality to self-determine our own destiny and therefore needed the grouping to be as united as the tied sheaf of paddy stalks in our logo. ERIA President Hidetoshi Nishimura said this on the role of Surin: “As a true leader of Asean, even well after his term as secretary-general ended, he gave himself fully to promoting the dream of a peaceful and prosperous region where every person could be a member of a caring and sharing community, a people-oriented Asean. He was also a strong believer in Asean centrality and the need for the region to promote intra-regional trade.”

A Noah for the regional ark
We both also believed in an inclusive Asean wherein every member must be taken on board the regional ark. While I worked from the early 1990s to establish the Greater Mekong Subregion project to promote the connectivities between the Mekong countries, Surin made the strongest effort to implement the charter for Asean integration which aims at narrowing the development gap through jointly undertaking to support Mekong countries through human resource development initiatives. His strongly urged Asean members to move closer through a labour mobility agreement in eight sectors, by using English as a common language and by learning to speak each other’s languages. He was also convinced that Thailand required deep educational reform to prepare ourselves for the Asean Economic Community, and also championed government incentives for Thai businesses to move out into the wider Asean region.
We all feel a massive sense of loss at the sudden passing of Surin. But we can keep his legacy alive by realising the Asean dreams that Surin cherished and did so much to cultivate.
I recall a Davos World Economic Forum meeting in which Surin joined WEF chairman Klaus Schwab and Prime Minister Lee Hsien Loong to discuss the various trouble-plagued regions preoccupying the minds of world leaders. Surin concluded that talk by reaffirming the viability of Asean and assuring the World Forum that “with Asean, you have one region less to worry about”.

Supachai Panitchpakdi is a former commerce minister, finance minister and deputy prime minister who also served as director-general of the World Trade Organisation and as secretary-general of the UN Conference on Trade and Development.